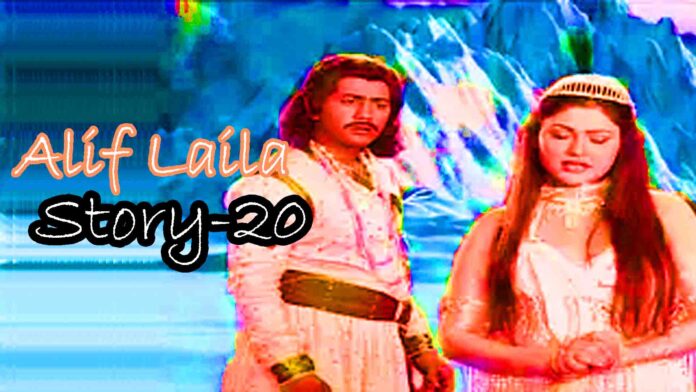 The Story of a Woman and Three Servants – Alif Laila

Shahryar was very happy to hear the story of Sindbad’s travels. He asked Shehrzad to tell more story. Shehrzad said that it was the rule of the Caliph Harun Rashid that he used to roam the streets of Baghdad from time to time to know the condition of the people. One day he told his minister Jafar that tonight I would go around in disguise, if I see that any guard is sleeping leaving his work, then I will fire him and reward the prompt men. The minister came to the Caliph at the appointed time with Masroor, the chief of spies, and the three of them left in Baghdad disguised as ordinary citizens.


When they reached a narrow street, they saw in the bright light of the moon a man of tall stature and a white bearded man with a net on his head and a basket made of coconut leaves on his shoulder. The Khalifa said that he looks very poor, ask him about his condition. Accordingly the minister asked him who are you and where are you going. He said, ‘I am unfortunate a poor fisherman. Went fishing this afternoon, but till evening I did not catch a single fish. I am going home empty handed now. I have a wife and many children at home. I am confused as to what to give them to eat today.

The Caliph took pity on him. He said, ‘You once again walk on the river and cast your net. Whether anything comes in your net or not, I will give you four hundred coins and I will take whatever comes in your net.’ The fisherman immediately agreed to it. He thought that it is my good fortune to find such a good man, who does not know that he cheated on me. Going to the river, he threw the net and dragged it after a while, then a heavy box came trapped in it. The Caliph got the fisherman four hundred coins from the minister and sent him away.

The Caliph was very curious what was in the chest. Masroor and Jafar placed the ark in the palace of the Caliph according to his orders. When he opened it, he saw something in it, which was stitched in a coconut mat with a red thread. The curiosity of the Caliph increased further. He cut the seam with a knife and saw that the body of a beautiful woman had been cut into pieces and buried inside the mat.

The Caliph was very angry seeing this. He said to the minister, ‘Is this your arrangement? I cannot tolerate such injustice in my state that someone should cut a poor woman and put her in a box and put it in the river. Either you find out its killer or I will hang you and your forty relatives.’ The minister trembled and said, ‘Government should give me some time to find out the killer.’ The Caliph said that you are given three days’ time.


Minister Jafar came to his house very mournfully and started thinking how the killer could be found in three days and even if he came to know, where would he get the proof that he is the killer. When would the killer have left the city? What to do? Should I accuse a man who is already in prison for this murder? , But this great injustice would be my crime that I should deliberately get an innocent punished, what face will I show to God in doom.

The minister ordered all the constables and constables to find the murderer of the woman in three days or else I would be killed and forty people of my family would be hanged with me. For three days they went from house to house searching for the killer, but the killer was nowhere to be found. After three days, on the orders of the Caliph, the executioner captured Jafar and his forty relatives and brought them before the Caliph. The Caliph’s anger had not yet subsided. He ordered that everyone should be hanged.

Forty one hanging tickets were erected under the direction of the executioner. A decree was made in the city that by the order of the Caliph, the minister Jafar and his forty relatives would be hanged. Whoever wants to come come and see. It became known in the whole city that on which crime the minister and his relatives were being hanged.

After some time the minister and forty of his relatives were brought under sticks and ropes were put around their necks. A huge crowd gathered there. The residents of Baghdad greatly loved the minister because of his modesty and justice. He was very much mourning his death. Hundreds of people started crying seeing the noose in his neck. Even on this the Caliph was so proud that no one had the courage to oppose the death penalty of the minister.

When the executioner and his subordinates were ready to pull the ropes, a very handsome young man came out from the crowd and said, ‘The minister and his family should be released. I am the murderer of a woman. Let me be caught.’ The minister was also happy to save his life, but seeing the youth of the young man, he was also saddened by his future death. In the meantime, a tall and stout old man also came out and said, ‘This young man tells lies. It did not kill the woman. I have killed him. Punish me.’

Then the old man said to the young man that son, why are you taking the responsibility of this murder, I have lived in the world for a long time, let me be hanged. But the young man remained firm on the point that these elders say false things, that I have killed that woman.

The caliph’s servants went to him and told him that there is a strange situation, both an old man and a young man are saying in their places that I have killed the woman. The caliph said that leave the minister’s relatives and bring the minister here respectfully. When this was done, the Caliph said that we do not need to get into much trouble, if both are taking responsibility for the murder, then hang both of them. But the minister said that certainly one of them tells a lie, it is not right to give death penalty to an innocent without investigation.


So both of them were also brought before the Caliph. The young man said by the grace of God that ‘I had killed that woman for four days and put her body in pieces in the river locked in the trunk, if I tell a lie then I will have to be humiliated on the day of doom and Later I will burn in the fire of hell forever.’ This time the old man did not say anything. The Caliph was convinced that the young man was the killer. He said, ‘You did not fear me or God while killing that woman. And then when you have already done this, why do you accept the crime now?’ The young man said, ‘If I get permission, I will tell the whole story. I also want this story to be written so that everyone can learn. The Caliph said, ‘Let it be so.’