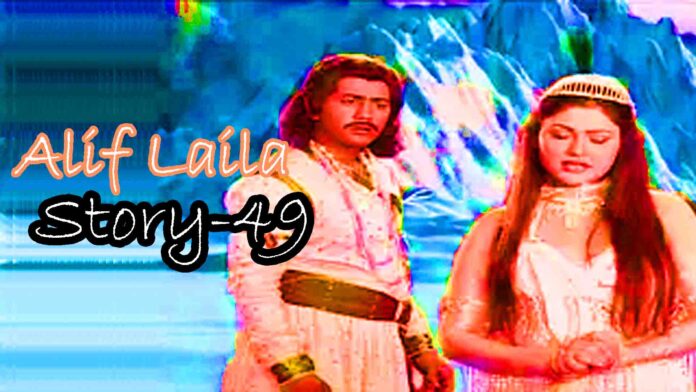 Story of a young and dead woman – Alif Laila

The young man said that ‘the dead woman was my wife and the daughter of this old gentleman and she is my uncle. I was married to him eleven years ago. We have three sons who are alive. My wife was very polite and pious. Everything was done for my pleasure and I also loved him very much. She fell ill a month ago. After a couple of days of medicine, she got better and was ready for a hygienic bath. But she said, I have become very weak, if you bring me an apple from somewhere, then I will be fine or else I will fall ill again. I went to the market to get apples for him, but not a single apple was seen there. Then I went around the orchards but there too I could not find apples at any cost. Then I came home and said that there is no apple to be found in Baghdad, I am going to Basra port, maybe apples can be found there.


‘I went to Basra and brought three apples of four dinars each from the royal gardens and brought them and gave them to my wife. She was very happy. She sniffed them and slipped them under her cot and then lay down with her eyes closed. I went to the market and sat at my clothes shop. After some time I saw a slave slave tossing an apple. I wondered from where did he get the apple, I have brought three apples from Basra with great difficulty. I called the habshi and asked where did you get this apple. He laughed and said that it was given to me by my girlfriend, her husband had brought three apples from Shahi Bagh of Basra after traveling for two weeks, one of which he gave to me.

Habshi also said that I and Sundari had food etc. together. Habshi went away saying this. Here anger made me worse. I closed the shop and went home and reached my wife. There he saw that there are only two apples under the cot. I asked him what happened to the third apple. He bowed down and looked at the apples and said indifferently that I do not know where the third apple went. Saying this she lay down with her eyes closed. I am convinced that the negro told the truth, it has an inappropriate relationship with him and that suddenly seeing me here, she is unable to make excuses. I was blinded by anger and humiliation and took out my sword and cut my wife into pieces.


‘After hearing this, my life was lost. I had killed my sati-sadvi wife on false suspicion. I became unconscious because of sorrow and remorse. When I became conscious, I asked the boy to go to sleep in the cell, and myself, sitting in a secluded place, got engrossed in misery. Sometimes I beat my head and sometimes shed tears. I curse myself a million times that you fool, how corrupt your intellect was that you killed your gentle and pious wife believing the words of an unknown negligent slave and did not show enough patience to inquire about it.

‘I was sitting in this state of mourning and repentance that at that very moment my uncle came to know about the health of his daughter. I told him the whole situation. He did not listen or reprimand me about the murder of his daughter, but considering it as a rule of law, he only became mournful and started crying. I also started crying and banging with it. But what was to happen due to crying and beating, my wife and her daughter are no longer in the world. I am deeply saddened ever since and can’t find any peace. I put the whole situation in front of you truthfully. Now you order that I be hanged.’


The Khalifa found the whole story astonishing. But when the old man also confirmed this, he said, ‘If a person commits an unintentional crime, he is forgivable in the eyes of me and God. I am also pleased with the truthfulness and justice of this man that he himself called for death to save the innocent from death and accepted his guilt. The slave to the death penalty is the slave whose lies led to such a tragic incident. Minister, do not consider yourself free now. You have to find the demon within three days that caused all this. If you cannot do this in three days, then you will have to be hanged.’

The minister thought that once she got rid of death, she fell behind again. He came home crying. He believed that this time life cannot be saved because millions of slaves are in Baghdad, how will the accused slaves be found. Then he thought that he should not be disappointed by the mercy of God. Just as he accidentally revealed the killer of an unknown woman, in the same way it is possible that this time also life will be saved.

But this time also the desired slave was not found within the stipulated period. Minister Jafar was called to be hanged. His relatives started crying after meeting him. The minister’s maidservant brought a five-six-year-old daughter of the minister. He loved this girl very much.


The minister told the soldiers that I should make love to my daughter before leaving. He gave permission. When the minister picked up the girl and applied it to his chest, something kept in her chest stuck. The minister looked over the girl’s chest and felt a bound round object. On being asked by the minister, the girl told that it is an apple which has the seal of Shahi Bagh on it.

When asked from where did it come to you, the girl said that my negro Ghulam, whose name is Raihan, had brought it and I have bought it from him for four coins. The minister opened the apple and saw the seal of the royal garden on it, then scolded the slave and asked from where did you get this apple, have you stolen it in my king’s palace? The slave said with folded hands, ‘I have neither stolen it from your place nor from the royal palace. I’m telling you the truth. A few days ago I came out of a street where three or four children were playing in front of a house. The eldest boy had this apple in his hand. I took it away from him. He ran after me crying and said that my father has brought this apple for my sick mother from far away, I have brought it without asking mother, you give it. But I did not give the apple and brought it to your daughter and sold it for four coins.


The minister was very surprised that the apple thief is a slave of his own house. Instead he took that slave with him and told the soldiers to take me to the Caliph. Going before the Caliph, he put the slave in front of the Caliph. At the request of the Caliph, Ghulam repeated the same story. The Caliph laughed after hearing this strange anecdote, but his desire to punish the culprit remained. He said to the minister, ‘The whole sad incident happened because of your slave, so he deserves the death penalty. Hang it so that people get education.’

The minister said that your order is justified. This unfortunate deserves this. But this is our old slave. I want to tell you the story of Nuruddin Ali and Badruddin Hassan, the ministers of the King of Egypt. If this entertains you, please withdraw the order of giving such a heavy punishment to the slave in return for it. The Caliph asked to narrate the story.