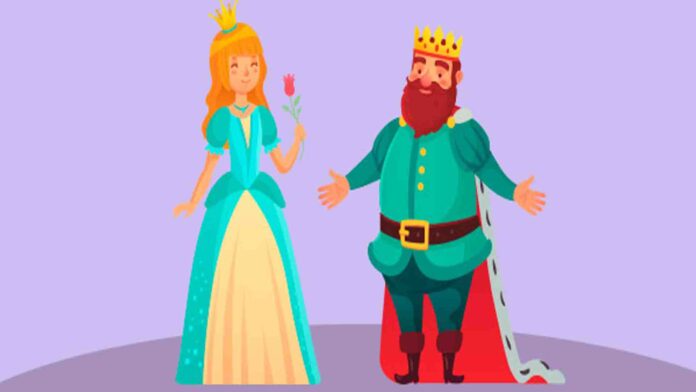 Adaptation of the classic tale by the Brothers Grimm

Once upon a time there was a king who had a daughter as beautiful as she was proud. The princess was already old enough to marry but could not find the right husband. For her, all the suitors had flaws or were not important enough to pay attention to them. None deserved her love!


One day her father, the king, organized a party in the palace in style so that she could choose her future husband once and for all. Many young people came from various neighboring kingdoms. Of course, they all belonged to very important families and enjoyed an exquisite education. Distinguished princes and nobles lined up in front of the princess who arrogantly stood before each of them and shamelessly made a comment full of contempt. One he called fat greasy, another bald as a ball, another ugly as a toad… When he got to the last of the line, he thought his face reminded him of a bird. Startled, she gave him another of her nasty comments.

– You have a crooked chin like a thrush! From now on, we will call you Pico de Tordo – said the princess, laughing.

His behavior deeply embarrassed the king, who banging his baton against the ground, sentenced with great anger:

– You wanted it, capricious and insolent girl! You will marry the first single man who appears at the gates of the palace. I order it so and so it shall be!

And having said this, he left the great room slamming the door and leaving all the guests not knowing what to say.

After three days, there was a knock at the main gate. He was a beggar dressed in rags who apparently made his living begging. The king sent him in and called his daughter.

– Here is your future husband!

– But father…! I… I can’t marry this ragged, classless, uneducated man!

– Of course you can! Your conduct was inadmissible and now you must bear the consequences.


That same afternoon, the beggar and the princess were married in privacy, with the king as the only witness. After the discreet ceremony, the young woman went to her rooms, took two of the simplest dresses she had and, very upset, left the palace hand in hand with her husband. They walked for hours until they reached the neighboring kingdom. When they crossed the border, they passed through large estates with beautiful gardens.

– That beauty! Who does all this belong to? – asked the young woman.

– Everything you see, as far as the eye can see, belongs to our King and his son, a young prince with a big heart whom everyone in this kingdom loves and admires.

– Damn… If I had chosen him as a husband, now all this would be mine… – the princess meditated sadly.

It was pitch dark when they got home. His new home was reduced to a very humble cabin, full of cracks through which the cold entered and without any type of comfort. The princess was devastated… What a horrible place!

Her husband asked her to light the fire, but she did not know how to do it. He had always had servants who did all these unpleasant tasks. Nor did he know how to cook, or clean, or make the bed, which in this case was a filthy mattress on the floor. The man, resigned, threw some logs in the fireplace and immediately warmed up.

The next morning, the beggar told him very seriously:

– We have nothing to eat. You will have to work to earn some money. Take these wicker strips and make some baskets to sell in town.

The princess tried, but handling the twigs injured her delicate hands. She was not cut out for such tasks!

– I see that it is impossible… You will try to weave thread tablecloths, to see if you are better at it.

The young woman was interested, but to no avail. The thread cut his fingers and from them came very fine streams of blood.

– Okay, forget about it! Tomorrow you will go to the village to sell the ceramic pots that I have made myself. It is our last chance to earn some coins!

– Me? To the market? That’s impossible! I’m a princess and I can’t sit there like a beggar selling trinkets If I’m recognized I’ll be the laughingstock of the whole world!

– I feel sorry for you, but there is no other choice. If not, we will starve.

The princess got up at dawn and with the heavy load on her back she walked to the village. He chose a corner of the market square and sat down on a dirty and frayed cushion. Around her she put all the earthenware pots, bowls and vessels she had to sell.

Suddenly, a man crossed the square on a galloping horse. The animal seemed out of its mind and in its path it carried away everything that the princess had placed on the ground, breaking it into a thousand pieces.

– Ouch! What a misfortune! What am I going to do now?… I have nothing left to sell! My husband is going to be very upset!

He returned with an empty sack, no pots and no money. When he entered the house, he collapsed and began to cry inconsolably. Her husband was very blunt.

– I had a feeling that this wouldn’t work out either, so I went to the king’s palace and asked him for a job for you. There is only one mop station and you will have to accept it.

Mop in the kingdom palace! The princess felt humiliated. Surely the king and prince were her father’s friends and would recognize her!


Dejected, she entered the palace through the back door, as befits the servants, and for days scrubbed all the marble floors and the stairs from top to bottom. By nightfall she was so exhausted that, after a simple dinner with the rest of the servants, she fell asleep thinking how unhappy her life was now.

Two weeks later, on the first day of spring, the palace was decked out for the wedding of the king’s son, whom the princess-turned-servant had yet to see around. When the big party began, he put the rags and the bucket of water aside and hid in a corner of the room. Seeing all the guests arrive one by one, she felt very unhappy and couldn’t help the tears running down her cheeks. The table was full of delicious food, the women wore their best clothes and the music enveloped everything. How much he regretted having reached this situation! If she hadn’t been so conceited, proud and overbearing, she would be enjoying the comforts and luxury that life had given her.

She was so engrossed that she didn’t notice that the prince had approached her from behind.

– May I have this dance, miss? He whispered in a velvety voice.

The princess turned around and gasped. The young man, although he was handsome and certainly very refined, had a slightly crooked chin. The prince was Thrushbill!

She was so embarrassed that she ran across the room. She was dirty, disheveled, and dressed in old, faded clothing. Around him, the illustrious guests burst into laughter. The princess became so nervous that she tripped and fell in full view of everyone. She covered her face with her apron and her cries were so great that the room fell silent. Then, he felt someone touch him gently on the shoulder. She looked up and there was Prince Pico de Throne holding out his hand.

– Don’t worry… I’m your husband, the beggar whom your father forced you to marry. He and I hatched a plan to teach you a lesson. I dressed up as a beggar and showed up at your palace because we wanted you to learn to value how important it is in life to be humble and respectful of others.

The princess got up from the ground and fixed her eyes on the prince’s.

– I’m so sorry… I was stupid and proud. Thanks to you, I am a better person now. Forgive me for insulting you the day we met.

– I know and I’m glad it is. Do you see all this? I have prepared it for you!

– This wedding is ours, yours and mine. Come on, go take a bath and get dressed. The maidens will accompany you. Although we are already married, we will celebrate the magnificent banquet that you did not have and that now you do deserve.

The princess felt on a cloud of happiness. She crossed the hall followed by a small entourage of maids and servants who helped her wash and dress for the occasion. When she entered the room again, she was greeted with a standing ovation. She was beaming!

Among the attendees was her father the king, who finally felt tremendously proud of her. Excited, she ran to hug him and lived the most beautiful moment of her life.