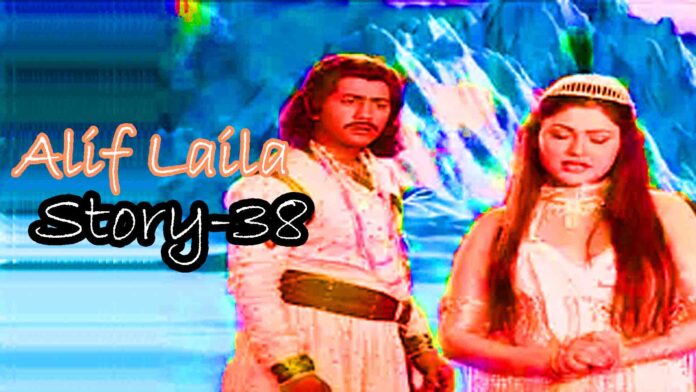 The third elder began to say: ‘O demon king, this mule is my wife. I was a businessman. Once I went abroad for business. When I returned home after a year, I saw my wife sitting beside a slave slave making lusciousness and courtship. Seeing this I was very surprised and angry and I wanted to punish them both. Then my wife brought water in a vessel and by blowing a mantra on it, she sprinkled anointed water on me, which made me a dog. The wife threw me out of the house and then indulged in her own luxuries.


‘I kept wandering here and there, then, distraught with hunger, I reached a butcher’s shop and began to eat his discarded bones. I kept doing this for a few days. Then one day he went to his house with the butcher. The butcher’s daughter went inside seeing me and did not come out for a long time. The butcher said, what are you doing inside, why don’t you come out? The girl said, how do I go in front of an unfamiliar man? The butcher looked around and said that there is no stranger to be seen here, which man are you talking about?

‘ The girl said, you do not know the story of this dog who has come with you in the house. This is man. His wife is proficient in magic. He has made it a dog with the power of mantra. If you don’t believe me, I can show it as a human right away. The butcher said, sleep for God’s sake. You make it a human being so that it accumulates the religion of both the world and the hereafter.

Hearing this, the girl came from inside with water in a vessel and sprinkled the water on me and said, leave this body and come back to your former form. As soon as he said this, I came again in human form and the girl again went inside the screen. I was overwhelmed by his benevolence and said, O Bhagyavati, by the favor you have done for me, may you get the constant happiness of the world and the afterlife. Now I want that my wife should also get the same punishment.

Hearing this, the girl called her father inside and after sending some energized water out of his hands said, you should sprinkle this water on your wife. Then whatever body you want to give her, take the name of that animal and tell the woman that you become this. She will take the body of that animal. I took that water to my house. At that time my wife was sleeping. This gave me a good opportunity to work. I splashed many anointed water on her face and said, You leave the woman’s body and become a mule. She turned into a mule and since then I carry around with me in this form.’


Shehrzad said – King Salamat, when the third elder had told his story, the demon was very surprised. He asked the mule if it was true what this old man said? The mule shook his head and indicated that it was true. After that the demon also forgave the remaining third part of the merchant’s crime and freed him from bondage. He said to the merchant, Your life is saved today because of these three old people. If these people had not helped you, you would have been killed today. Now express your gratitude to these three. After saying this the demon disappeared. The merchant fell at the feet of all three of them. They went their separate ways by blessing him and the merchant also returned home and lived happily ever after living with his loved ones.