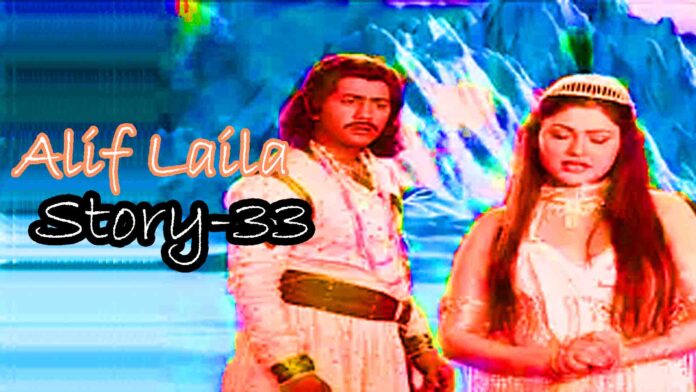 Story of the Merchant and the Monster – Alif Laila

In ancient times, a very wealthy merchant used to trade in many commodities. Although every place had his kothis, gomasthas and servants, yet he himself also used to travel country and abroad for business. Once he had to go to another place for some special work. He left alone on a horse. There was nothing to eat or drink at the destination, so he stuffed kulchas and dates in a khurji. He returned when the work was done. On the morning of the fourth day, seeing a serene tree near dense trees, some distance away from his path, he felt a desire to rest. He got off the horse and sat on the bank of the pond and started eating kulcha and dates. When the stomach was full, he threw the palm kernels here and there to clear the place and started resting.


At that moment, he saw a great fierce demon coming towards him with a big sword drawn towards him. Coming near, the demon roared with anger and said, ‘Come here. I will kill you.’ Seeing his terrible appearance and hearing the roar, the merchant began to tremble and said, ‘Master, what crime have I committed that you are killing me?’ The demon said, ‘You have killed my son, I will kill you.’

The merchant said, ‘I haven’t even seen your son, how did I kill him?’

The demon said, ‘Didn’t you leave your way and come here? Have you not taken dates out of your pocket and eaten dates and threw their kernels here and there?’ The merchant said, ‘Your words are fine. That’s what I did. The monster said, ‘While you were throwing the kernels, you were throwing it so hard that a kernel hit my son’s eye and the poor man died at the same time. Now I will kill you.’

The merchant said, ‘Sir, I have not intentionally killed your son. Then I fall at your feet and apologize for the mistake I have made.’ The demon said, ‘I know neither to show mercy nor to forgive. And is it not in your Shariat itself that instead of slaughtering, the order of slaughter has been given? I will not live without killing you.’

Having said this, the demon grabbed the merchant’s arm, dropped him on the earth and raised a sword to kill him. The merchant started weeping after remembering his sons and daughters, as well as begging for his life from the demon by giving the blessings of God and the holy spirits. The monster stopped his hand thinking that when he stops thrashing his hands and feet, then I will kill him. But the merchant did not stop crying. At last the demon said to him, ‘You are troubling yourself and me unnecessarily. Even if you shed blood from your eyes instead of tears, I will kill you.’


The merchant said, ‘How sad that you do not feel pity on me in any way. You are unjustly killing a lowly, sinless man and my cries and pleas have no effect on you. I still can’t believe that you will kill me.’ The demon said, ‘No. Surely I will kill you.’

By then it was morning. Shahrajad fell silent after telling such a story. He thought, it is time for the king to offer Namaz and after that he will go to the court. Duniyajad said, ‘Sister, what a good story it was.’ Shehrzad said, ‘You like this story? Nothing right now, it’s even more surprising in the future. You will be even happier if you listen. If Badshah Salamat lets me live today and then allows me to tell the story, then tomorrow night I will tell you the rest of the story, or else I will go to God.’

Shahryar also liked this story very much. He thought that Shehrzad should not be killed until the story was completed, so he gave up his intention to execute him that day. Getting up from the bed, he went to offer Namaz and then went to the court. The mourning minister was also present. He had not slept the whole night thinking about the fate of his daughter. He was waiting that if there is a royal order, then I should take my daughter and hand it over to the executioner. But he was surprised to see that the emperor did not give this tyrannical order. Shahryar was busy with the kingship throughout the day and slept with Shahrajad at night.

After staying for a while, Duniyajad woke up again and told the elder sister that if you have not slept then tell that story further. Shahryar also woke up and said, ‘That’s right. I also want to hear the story of the merchant and the monster. You take the story forward.

On the way the merchant had a strange condition. Sometimes he would be happy that he was still alive and sometimes he used to grieve at the sure death of a year later. When he reached home, his wife and brothers and sisters were pleased to see him, but he started crying on seeing them. They understood from his lament that he had suffered a heavy loss in business or that some other favorite thing had gone out of his hands, due to which his patience had been eroded.


When the merchant calmed down and his tears stopped, his wife said, ‘We are glad to see you; Why are you weeping like this? My life is one more year.’ Then he narrated the whole situation and narrated his promise made by witnessing to God in front of the demon. Hearing this whole situation, all of them also started crying and beating. Especially his wife started beating her head and plucking her hair, and her sons and children started moaning loudly. The day was spent only in crying and beating.

From the second day onwards the merchant started his worldly work. First of all he returned the money to his creditors. He gave valuable gifts to his friends, donated wholeheartedly to the mystics and sages, freed many slaves and slaves. He gave substantial wealth to his wife, appointed guardians for minor sons and daughters, and divided the property among the children.

A year passed in all these arrangements and he left with a sad heart to keep his promise. He took some money with him for the expenses of his burial. At the time of him, all the family members started crying and clinging to him and saying that take us with you too so that we also die with you. The merchant fixed his mind and asked them all to be patient, ‘I am bowing my head before the will of the Lord. You guys also be patient. Understand that one day everyone has to die. No one can escape from death. So you guys do your work patiently.’

The merchant left after taking farewell from his relatives and after some time reached the place where he had asked to meet the demon. He got down from the horse and sat on the bank of the pond, sadly looking for the path of his killer monster. In the meantime an old man came carrying a deer and said to the merchant, ‘How did you come to this deserted place? Do you not feel that many people deceively think of it as a good resting place and come here and suffer various kinds of sufferings at the hands of demons?’ The merchant said, ‘You are right. I am also going to fall prey to a demon by falling into this deception. Saying this he told the whole story to the old man.

The old man said in surprise, ‘You have told such a thing as no one in the world has ever heard of it. You did not even worry about your life in fulfilling the gift of God that you had eaten. You are very truthful and your integrity is less than appreciated. Now I will stay here and see what the monster does to you.’

They started talking to each other. Just then another old man came with a rope in his hand and two black dogs were tied to that rope. He started asking them about their well being. First the old man told the whole story of the merchant and also said that I am sitting here to see the future. The other old man was also surprised to hear all this and sat there and started talking to both of them.


After some time another old man came carrying a mule and started asking the first two old men why this merchant was sitting here so sad. Both told the complete condition of that trader. The third old man stayed there and expressed his desire to see the end of this business. So he too sat there.

Now the third old man was not even breathing well that the four men saw that a big huge smoke was rising in the forest in front. That cloud of smoke came near them and disappeared. They were rubbing their eyes with wonder that a very terrible monster appeared. He had a sword in his hand and said to the merchant, ‘Get up and come here. I will kill you, you have killed my son.’ Hearing this, the merchant and the three old men trembled and wept loudly. The forest reverberated with the cries of all of them. But the demon caught the merchant and took him to one side.

The old man with the deer saw this and ran to the demon and said, ‘Maharaj, the demon, I want to make a request to you. Keep your anger under control for a while. I want to tell you the story of me and this deer. But there is a condition to the story. If you find this story strange and like it, then forgive one third of this businessman’s crime.’ The monster thought for a while and said, ‘Well, I accept your condition. Tell the story.’