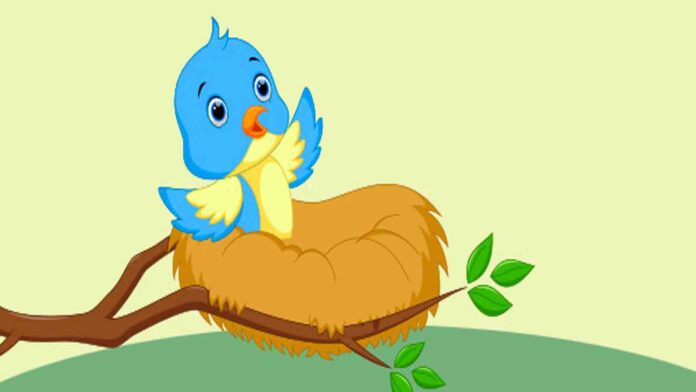 Once upon a time there was a beautiful little blue bird that lived in a tree that grew proudly on top of a mountain. From that privileged place you could see the sea and you could hear the sound of the waves beating against the rocks, enjoy the penetrating sea breeze, and contemplate every night a huge orange sun submerging in the waters until the arrival of the new dawn.


In addition to those impressive views, the little blue bird enjoyed the advantages of being a bird. The greatest of all was that he could perform a lot of stunts in the air, but also do very cool things like catch bugs on the fly or, in the summer months, flutter through the fluffy and humid clouds to take off the heat and come back cool. nest.

Completely stunned, he repeated to himself over and over again:

– ‘How much I would like to have been born a fish!… If I could change my wings for fins I wouldn’t think twice.’


He became so obsessed with the idea that there came a time when he lost interest in everything around him. The little blue bird stopped eating and gradually became pale, skinny, without strength. His mother, very worried, warned him:

– My son, you can’t go on like this. You should be having a good time with your gang and not stuck at home all day doing nothing but looking at the sea. You are a small bird and you will never be able to swim. Don’t you realize it?… Come on, go for a walk, it’s a splendid day!

Though these words were meant to cheer him up, they were of little use; On the contrary, the young bird felt even more depressed and, as soon as his mother left, he began to cry bitterly, feeling that no one in the world understood him.

He was just getting there when a passing white-breasted gull landed next to him and patted him on the back with one of its sturdy yellow legs.

– May I know what’s wrong with you, little one? From your sadness I deduce that you are in a very big problem.

The little blue bird looked at her out of the corner of her eye, a little embarrassed.

– I don’t know if it’s a problem, but the truth is that I feel terrible.

The seagull sat up, ready to listen to the story.

– I have nothing better to do so I am all ears. If you share with me what bothers you so much, maybe I can help you.


The little bird continued without removing its little eyes flooded with tears from the infinite blue sea. At last, he was able to let go of everything inside him.

– Do you see how amazing the ocean is? And do you see how close it is?… Since I was born my great dream is to learn to swim.

– To jump the waves, to check if the water is as salty as they say, to float face up like a drifting log… and to explore the bottom in search of corals!

The seagull felt very sorry for him and was silent for a few seconds. The boy did not ask for little! Finally, he decided to comment.

– Even if you don’t believe me, I assure you that I can understand your frustration: you’re a bird that wants to swim and can’t swim… Isn’t that right?

– Listen carefully to what I am going to tell you: all beings in the world, from the smallest to the largest, have a lot of virtues, but also some limitations that we must accept naturally. Have you never stopped to think about that subject?

– The truth is that not much.

– Well, you just have to look at the others. For example… look over there! Do you see those humans walking barefoot on the beach? They say they are the most intelligent beings on planet Earth! They have such highly developed brains that they are capable of building sophisticated rockets that traverse space and land on the Moon, but guess what? They will never be able to fly by themselves like us birds, or run at the speed of cheetahs, or jump from branch to branch like gorillas!

The little blue bird relaxed a little, fascinated by the explanation of the wise seagull.

– And what about us animals? We all have different abilities! Fish know better than anyone what the sea is like, but they will never know the pleasure of savoring a blueberry. Moles can dig the longest tunnels, but they are doomed to live in the dark covered in dust. Not to mention the elephants, always dragging tons of weight wherever they go!… Instead you can eat fresh fruit, enjoy the scent of flowers, dance on the breeze because you are light as a piece of cotton…

The little bird was beginning to understand what his new friend wanted to convey to him.

– Without going any further, look at you and me! It’s true that since I was born a seagull I have a blast fishing in that sea you look at so much, but I’m so big that I can’t play hide-and-seek in the bushes because it would destroy my wings. Oh, and better not to mention the terrible squawks I let out every time I move my beak… Not all of us were born with that melodious voice that your kind have, my dear!

The words of the seagull penetrated deep into the heart of the little bird who, for the first time in a long time, began to feel lucky to be who he was.

– You are right! Nature has been generous to me and because of my stubbornness I am missing many things.

The seagull couldn’t help puffing out her chest in satisfaction.

– I’m glad you got the idea! It would be great if you focused on what you are good at, what you can do. We all have a talent for something and you blue birds are exceptional singers.

The seagull was not lying: with the exception of goldfinches and nightingales, no bird for miles around could boast such a soft and in-tune trill.

– In the music school next to the waterfall, the best teachers in the area teach classes. It occurs to me that you could take singing lessons a couple of days a week and join a choir.

New plans for the future began to emerge in the head of the young bird.

– Not a bad idea… Maybe I can perfect my vocal technique to become a great tenor!

The seagull was happy to see that the little blue bird was recovering its illusion.

– Bravo, friend, that’s the attitude! Anyway, there is one more thing you should learn today.

The little blue bird looked at her intrigued.

– What, seagull friend? What are you talking about?

– You have understood that you must accept your limitations, right?

– And you see clearly that you will never be able to bathe in the ocean, right?

– Well, I meant that you can’t do it by yourself.

– How?… What are you insinuating?…

– What are friends for?! Come on, get on my back, we’re going on an adventure!

The little blue bird went crazy with happiness! Without thinking, he jumped on top of the seagull and grabbed the feathers on the back of his neck as hard as he could. He almost didn’t even have time to swallow before hearing the exit notice:

When her friend picked up speed and began to fly down the mountain like a torpedo, the little blue bird began to shout enthusiastically:

Before he knew it he was already there, flying over the wide sea, breathing in the strong aroma of salt, and noticing his heart galloping inside his chest like a runaway horse.

– Didn’t you want to feel the ocean?… Well, let’s see it even closer!

The seagull made a surprising turn and flapped its wings like crazy. Next, and with a dexterity worthy of an elite athlete, she positioned herself at water level, put her wings in the shape of a cross, and began to glide with her legs on the surface as if she were water skiing.

Finally, when it seemed that the excitement had reached the limit, there was one last surprise: the seagull dived without warning into the water and dived for a few seconds so that his little friend could enjoy the silent and incredible natural world that the bottom of the sea hid. .

Nobody can imagine what that incredible experience meant for the little blue bird. He had fulfilled his dream thanks to the kindness of an unknown white seagull with yellow legs that crossed his life at the time he needed it most. He couldn’t feel happier!

Back in the nest, he hugged her very tight.

– So long waiting for this moment!… There are not enough words to thank you for what you just did for me. You have made my saddest day the happiest of my life!

– Nonsense, there is nothing to be thankful for! It was a pleasure to share such a magical moment with you, but I hope that from now on you accept yourself as you are. Life is to enjoy it, never forget it.

– Well, I have to go. If one day you want to go down to the sea and have a good time, whistle loudly and I’ll come whistling, okay, little sailor bird?

Without saying anything else, the seagull winked at him and took flight. As he walked away, the little blue bird noticed how a tear of happiness slipped down his cheek. She wiped it away with her little wing, sighed deeply, and left the nest. The music school was waiting for you!