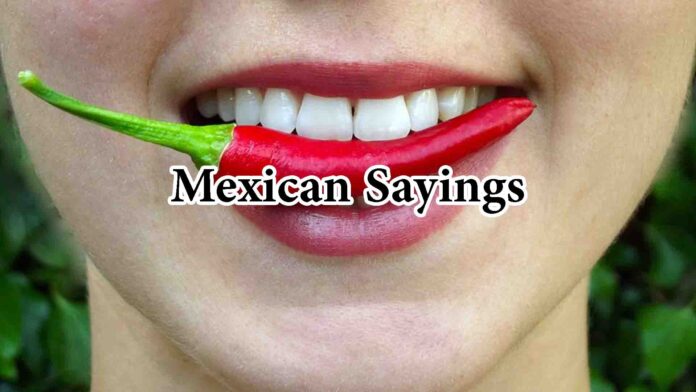 The magic contained in Mexican proverbs immerses us in a world of popular wisdom where language offers us, on the lip, those experiences that have endured from generation to generation. It is through oral tradition that the transmission of such knowledge has been allowed, always relying on the wisdom of our ancestors.

Mexican proverbs, like all proverbs, are ways of understanding certain thoughts that encompasses a given society, since they speak of the customs and traditions of the people.


There is always an appropriate proverb for each occasion, and in the case of Mexican proverbs, these are considered as statements that warn of possible circumstances, or that intend in a certain way to leave some kind of teaching or reflection.

How many Mexican sayings do you know? There are many phrases that grandparents have told their later generations  and they always intend in some sense to imply something or refer to some explanation. Having a repertoire of sayings allows you to memorize the experience that other people have advised to carry; and in addition, it generates the possibility of transmitting human traditions in a simple way.

Many Mexican proverbs try to explain life issues with other words. In the proverbs tradition of these lands, the flavor of ingenuity and everyday life are generally used for the elaboration of proverbs and their respective permanence through the years.

What do you know about Mexican proverbs?

From the wonderful study of proverbs, sayings, proverbs and the like, the science that has been dedicated to developing a serious compilation and conducting academic analyzes on these sentences is paremiology. This discipline seeks to understand all those sentences that transmit some kind of popular knowledge based on experience.


Paremiologists agree that a proverb is a short, witty phrase that reflects human experience over time. Usually, Mexican sayings use metaphorical ways to convey a message beyond the literal and have rhymes that facilitate their memorization.

It is characteristic of proverbs that they are transmitted orally and from generation to generation. Although the written support is still present, proverbs have become such ingenuity and wisdom of human language because they are everywhere. At any moment a proverb can come out of someone’s mouth, whether they are known or not, because we carry proverbs as much as our own culture.

Proverbs have always existed and in all places on the planet. They are considered as part of the wisdom of the people, always expressed in a didactic way, giving some advice or simply summarizing facts and situations already known.

Mexican paremiology has allowed us to investigate the origins of the country’s proverbs, coming to understand that its history is quite old.

Mexican proverbs are creations of the culture and experience of the peoples. There are also many proverbs that come from Hispanic lands and that have been incorporated into the cultural legacy of paremias, as there are other proverbs that are the result of miscegenation and hybrids between various cultures.


Like the popular Mexican language, it has peculiarities that make some of its sayings unique. Moreover, there are hundreds of sayings of Nahuatl, Mixtec, Huastec and other Mexican cultures that could impress you.

Importance and meaning of Mexican proverbs

Mexican proverbs are important to the extent that they are an integral cultural part of history. Beyond studies on the ancient origin or historical or geographical meaning of Mexican sayings, their importance lies essentially in their respective semantic interpretation as a social narrative.

Although the intention of the proverbs is to transmit to us a traditional knowledge that has been obtained from the experience of many generations, the Mexican proverbs today reach our reach and even our possibilities due to their continuity in the popular word.

Within the narrative of the Mexican territory, popular culture hosts numerous expressions over time that are reproduced orally and due to tradition, legitimizing its social discourse while creating proverbs in the exercise of generational, dynamic communication. and contextualized.

88 years ago, the Mexican writer and academic Darío Rubio set out to study the popular language of his country, finally specializing in paremiology. He was even named a member of the Mexican Academy of Language. He also wrote a book Sayings, Proverbs and sayings and Mexican sayings and tell the languages ​​that after its edition, in the blink of an eye the 5,000 copies of the first edition were exhausted. Later, in 1940, Darío Rubio published two more volumes on Mexican proverbs interpreted, defined and explained for the second edition that was significantly expanded.

Suppose that this man, a native of Guanajuato, liked sayings is not so difficult to imagine. Interested in paremiology and popular speech, he wrote articles for various periodicals and that is how Darío Rubio became a pioneer in Mexican paremiology.


And what better than their proverbs —ask the reader—, their sayings, to know how the Mexican people live and how they think?

In the Mexican proverb the prejudices and teaching of old axiologies, beliefs and experiences of a people are reflected. We could even say that Mexican proverbs have great historical value, their experience of small things managing to define “what is Mexican”.

Mexican sayings can be considered as treasures of our traditions and it is a very formative exercise to stimulate reading, knowledge and also alludes to how to use a resource that carries a historical identity behind it.

Since the 90s of the last century, the Mexican professor and researcher Anna Fernández Poncela has constantly worked towards an understanding of the paremiology of the Mexican country.

In 2002, he published his book on proverbs, an object of study that has been his passion and interest for years. Mexican proverbs have been the center of his research to find arguments and meanings. Likewise, the renowned academic makes an analysis of the validity and perceptions of Mexican proverbs and their continuity of use over time.

We can take proverbs as sentences of common use. Thus we come to consider proverbs as statements that basically produce and reproduce social definitions, ways of thinking and acting. Being a type of discourse that conveys knowledge, beliefs, and certainly all kinds of meanings, without forgetting the roles and stereotypes of a society.

Language has the ability to serve as a social exchange of meaning, where we can appreciate how Mexican proverbs endure over time. In many cases, a restructuring of the message is considerable, or perhaps a rearrangement of survival and readaptation as part of cultural miscegenation and changes in the face of social narratives.

Mexican proverbs as didactic and moral stories of discursive practice prevail the conception as the truths of popular speech.

The uses that are associated with Mexican proverbs refer to the fact that there is no need to question everything because every proverb serves as points of agreement in everyday arguments. Mexican proverbs express old rhetorical topics that are rooted in the discursive consciousness of a people.

Sayings tend to advise, explain, recommend, describe, persuade, or intimidate. They generally say a lot in a few words, they can outline common ideas and in some cases they allude to certain problems of social reality.

Basically every saying provides a window from which to look at life and the world, from which you try to share experiences in a very simple and quite pleasant way. The teachings left by Mexican proverbs serve to interpret and compare different situations.

The legacy of Mexican proverbs

Mexican sayings contain wisdom of daily life much greater than what can be found in any library and this ancestral knowledge has to do directly with the imaginary of national identity.

Mexican proverbs reveal popular beliefs that have been accumulating over time and that contain a certain mischievousness or situation in an ironic way. It is, therefore, about phrases that are very useful to promote and preserve the transmission of beliefs and warnings of life.

The reflections on the things that happen serve to warn us of the situations that can happen given the supposed case. The legacy of Mexican proverbs is basically its tendency to advise on different aspects of daily life, even if we are not in Mexico.

The playfulness of Mexican proverbs continues with great validity in our time due to its population and its application in reality. This is how proverbs seem to be an excellence of everyday colloquial language and are often located between advice and entertainment for most people.

If you know any Mexican proverb, we invite you to share it, and if there are few of you who have heard it, it is convenient that you read a little about this attractive narrative that has passed from generation to generation, always waiting for the right moment to be pronounced.