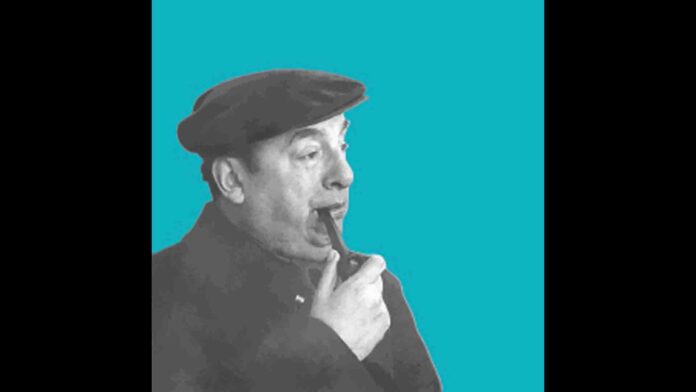 Pablo Neruda was a Chilean poet, diplomat and politician who received the Nobel Prize for Literature in 1971. Neruda was born on July 12, 1904 and died on September 23, 1973. His first works came to light when he was only 13 years old. He was only 20 years old when one of his most popular works came to light: Twenty Love Poems and a Song of Despair.

Born as Neftalí Ricardo Reyes Basoalto, the writer known as “the poet of the people” signed his works under the pseudonym Pablo Neruda, a name that he legally made his own years later.

Neruda is often considered the national poet of Chile , but his works are known throughout the world. Colombian novelist Gabriel García Márquez once called him “the greatest poet of the 20th century in any language.”

Poems of Pablo Neruda: his beginnings 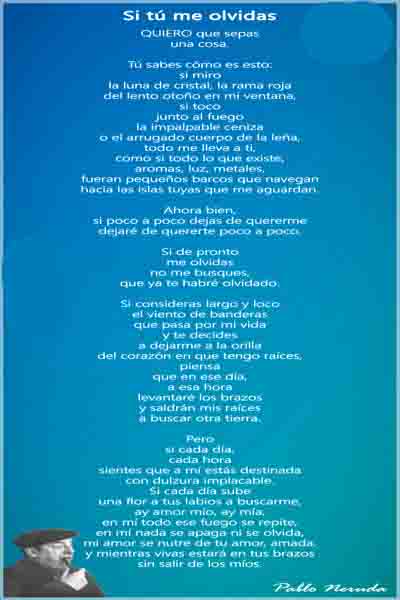 Neruda on July 12, 1904 in Parra, Chile, and was baptized as Neftalí Ricardo Reyes Basoalto. Neftalí Ricardo was a precocious child, who was already writing poems when he was only 10 years old. His father tried to dissuade him from writing. This was probably why the young poet began publishing under the pseudonym Pablo Neruda , which he legally adopted as his legal name in 1946.

Pablo Neruda’s first poems appeared in local newspapers and later in magazines published in the Chilean capital, Santiago, a city to which he moved in 1921.

The  first book of poems by Pablo Neruda , entitled Crepusculario , was published in 1923. They were subtle and elegant poems that connected with the tradition of symbolist poetry, in its Hispanic version, that is, modernism.

His second book, Twenty Love Poems and a Song of Despair , was published in 1924. To write this famous collection of poems, Pablo Neruda was inspired by an unhappy love story. These poems express a young and passionate love, but at the same time unhappy, in the style of poetry with a long romantic tradition, for many, even better.


Twenty Love Poems and a Song of Despair , which became a hit as soon as it was released, remains one of Neruda’s most popular books today. His verses are vigorous, direct and moving. His images and metaphors are loaded with subtlety and originality.

Some of Pablo Neruda ‘s most beautiful short poems are from this early period. They are poems full of beauty, feeling and passion that are loved now as much as they were in their time.

However, there are many short poems by Neruda that still arouse interest today and by readers around the world, both in Spanish and in any of the languages ​​into which they have been translated.

Pablo Neruda as a consecrated poet

At the age of 20, with two books published, Neruda had already become one of the best-known Chilean poets and began to devote himself entirely to poetry. In the following years, three more books by the author were published: Attempt of the infinite man (1926),  Rings , in collaboration with Tomás Lago (1926) and The enthusiastic slinger (1933).

However, his poetry was not a constant source of income, so he quickly translated from various languages. He also devoted himself to publishing magazine and newspaper articles.

As Neruda’s future seemed uncertain, without a stable job, he managed to be appointed honorary consul of Rangoon in Burma (now Yangôn, Myanmar). For the next five years he represented his country in Asia. However, he lived in extreme poverty (as an honorary consul he received no salary) and loneliness tormented him.


From Rangoon, Neruda moved to Colombo in Ceylon (now Sri Lanka). Increasingly he identified with the masses of South Asia, oppressed by poverty, colonial rule, and political oppression. It was during these years in Asia that he wrote Residence on Earth (1933), where he abandons normal syntax, rhyme, and stanzaic organization to create a completely personal poetic technique. They are mysterious and disconcerting poems that attract and, at the same time, repel the reader.

In 1930, Neruda was appointed consul in Batavia (present-day Jakarta). In 1932, Neruda returned to Chile. In 1933 he was appointed Chilean consul in Buenos Aires, Argentina, where he met the Spanish poet Federico García Lorca.

In 1934 Neruda became consul in Barcelona, ​​Spain, and was soon transferred to the consulate in Madrid. His success there was immediate after being presented by García Lorca. Neruda’s new friends, especially Rafael Alberti and Miguel Hernández, were involved in radical politics and the Communist Party. Neruda shared his political beliefs and moved closer and closer to communism.

An expanded second edition  Residence on Earth was published in 1935 , in two volumes. In this edition, Neruda begins to move away from highly personal poetry, adopting a more extroverted perspective and a clearer, more accessible style.

The outbreak of the Spanish Civil War in 1936 interrupted this line of work. Neruda became involved with the war, traveling in and out of Spain to raise money and mobilize support for the Republicans.

In 1937 he published  Spain in the heart . work in which he expressed his feelings of solidarity with the Republicans. The book was printed by Republican troops working with makeshift printing presses near the front lines.

Later that year, Neruda returned to Chile and entered the political life of his country, giving lectures and poetry readings while defending republican Spain and Chile’s new center-left government.

In 1939 he was appointed special consul in Paris and in 1940 he assumed the position of general consul of Chile in Mexico. He also began work on a long poem, Canto general . that saw the light in 1950.

In 1943, during a trip to Peru. This trip inspired one of his best poems, Heights of Macchu Picchu , published that same year.

In 1945 he was elected a senator and also joined the Communist Party. He was expelled from the Senate in 1946 for political reasons. He was in hiding until he fled Chile in 1948.


In exile, Neruda visited the Soviet Union, Poland, Hungary, and Mexico. During this time he wrote some of the most passionate Spanish love poems of the 20th century, inspired by what would become his third wife. In 1947 the third volume of the Residencia cycle was released.

In 1952 Neruda was able to return to his native country. By then his works had been translated into many languages. He was already a rich and famous poet.

In 1954 he published  Elemental Odes in a new simple, direct, precise and humorous poetic style. A score of more books saw the light in subsequent years, eight more after his death on September 23, 1973.