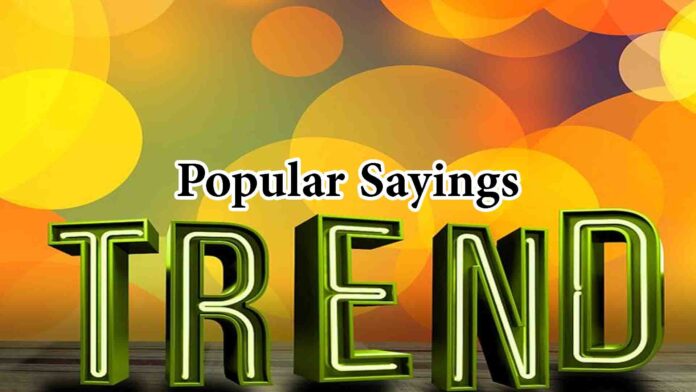 Popular Sayings Interesting to Read About Saying for Popular

We use proverbs daily, sometimes even without realizing it. Sayings have become a universal form of communication, which gives us the freedom to express ideas and reflections that perhaps cannot be summarized in another context, or with other words. This is how they emerged, as phrases or sentences that served to express some generalized idea. They became so popular that they were adopted by many people regardless of the region they lived in, or the culture they belonged to. Even proverbs are born in different parts of the world, but they are derived from situations so common and universal that each country, culture or religion adapts them to its own environment.


A proverb can enclose the popular wisdom accumulated over centuries and that has passed from generation to generation to the present day. The problems of humanity and the reflections that derive from them have not changed with respect to other times. What is different is the reason why we are subjected to such problems, and the way in which we are dealing with them. Even so, many proverbs still have that much-needed wisdom to understand the things we live in our day to day.

The origin of popular sayings and their meaning

Although proverbs in Spanish could be traced back to the European Middle Ages, and in the particular case of Latin America and Spain, to the development of Spanish culture during that time, many proverbs can be traced back to earlier times; even from other cultures.

There are sayings that refer to cats, their elegance or wisdom. We can place them in ancient Egypt, where these animals were revered and worshiped as gods. We can also find phrases that became popular in ancient Greece, the cradle of philosophers and thinkers who somehow shaped the foundations of Western society. Just as there is the influence of the ancient Roman empire in some of the sayings that are heard today. These cultures caused such an impact on the history of humanity that within something as popular as proverbs, they maintain their historical echo.


On the other hand, many biblical phrases became proverbs. Biblical stories come from the accumulation of stories of the Hebrew people. When Christianity appeared, they were shaped to create the bible we know today. But it was not until Christianity became so popular that many people adopted passages or phrases from the Bible to give them a more everyday meaning, and thus, create proverbs.

From the East, where great thinkers have emerged and have a very rich religious culture, popular phrases have also crept in that ended up becoming proverbs. These phrases can be located at the time when Eastern and Western cultures began to exchange, through the famous Silk Road.

Sayings are always framed in a historical context, so they reflect some situation of a specific time. When the Moors invaded the Iberian Peninsula there was a very rich cultural exchange, from which many cultural manifestations were derived, and in some way they generated proverbs that were framed within that specific historical context. But that is just one example, proverbs can originate from war conflicts, great tragedies, plagues, etc. Everything that generates an impact on society and leaves some moral, can eventually become a saying.

words from before and now

Although many of the proverbs have managed to last over time, there are many that refer to words that are in disuse. It is common to repeat some popular phrase without even knowing exactly what it refers to, but still understanding what its meaning is.

As most of the sayings we know today were born in the middle ages, it is possible that around another 800 years in the future, there will be sayings that refer to mobile phones, webcams, or Instagram. The humanity of the future may only have a vague notion of what a social network is, but the meaning of the saying is very likely to be preserved. The same thing happens to us today. Our parents, grandparents and even great-grandparents use terms that they themselves do not know, but that were passed down through the years to exemplify some situation, and still serve the same purpose.

From the process of Spanish colonization in America, there were many proverbs that were adopted from the Spanish culture. However, each country maintains its own cultural features, ranging from gastronomy to the accent with which they pronounce Spanish, which is the common language in much of the continent. It is not surprising that the same has happened with proverbs, as they have been adapted to each country, its customs and the individual history of each one.

But the most striking thing is that each country in turn generated its own proverbs and popular phrases. Throughout Latin America there are some unique sayings that represent the idiosyncrasy of a country, but there are also variations of the same saying but with their own words and idioms.


Even so, in many Latin countries sayings and phrases are still used as they are used in Spain, since the words of that country were assumed by the Latin countries. So it is common to hear in Latin America expressions that refer to places in Spain, or terms alluding to Spanish culture, even when there are synonyms or Latin versions of those same terms.

A culture of proverbs

The most attractive aspect of sayings is that throughout the Latin and Spanish culture there is a root with their use. In the way of speaking in many countries, using a proverb is recurrent, since there are proverbs that fit perfectly with some situation that is developing. But this cultural trait is more noticeable in older people, who come from generations where the use of proverbs was very common.

Being a widespread tradition thanks to word of mouth, it has become a way of speaking. Although each country may have its differences, that unique way of expressing ideas through phrases or witty sayings is typical of the Hispanic American culture. It is one of the common points where the idiosyncrasy of many countries make a meeting. Sometimes it is not even necessary to understand the context of the saying to know what it is referring to.

There may be proverbs that represent a specific region, country or cultural trait, but analogs are always found in different places, since the universality of situations allows us all to feel identified with the lesson to be learned. There may be variations in very specific words between neighboring countries or regions, but the content is always preserved. The culture of the proverb has become a form of communication throughout Latin America.

A proverb is worth a thousand words

The value of proverbs ranges from the importance of preserving culture characteristics, to keeping some language peculiarities intact. A proverb is a witness to history that is passed on to the next generation. It is one of the sure ways to preserve the collective memory of a society. But in addition, the language is enriched due to the way in which the message that derives from some complex reflection about an event is delivered. Sayings, let’s not forget, are summarized representations of some situation that show behaviors that invite us to reflect.

It is not easy to deliver a moral lesson in such a way that it is understandable by anyone, and also summarized in a couple of sentences, at most. In itself, the proverb is an artistic representation of language; being of an anonymous author and born of popular wisdom, a proverb becomes an intangible asset of any society.

The ability to deliver messages, to give lessons, to make us laugh and reflect, all sometimes at the same time, within a short phrase or perhaps a sentence, is something that only proverbs can achieve. Not in vain have they managed to survive for so long among us. Although they have fallen into disuse in some parts of Latin America, they continue to create a unique link between our identity as individuals and as a group, since it frames us within our family context and our place within society. Without proverbs, perhaps there would be no possibility of crossing borders with our languages, nor would there be a bond that unites us as Hispanic Americans.