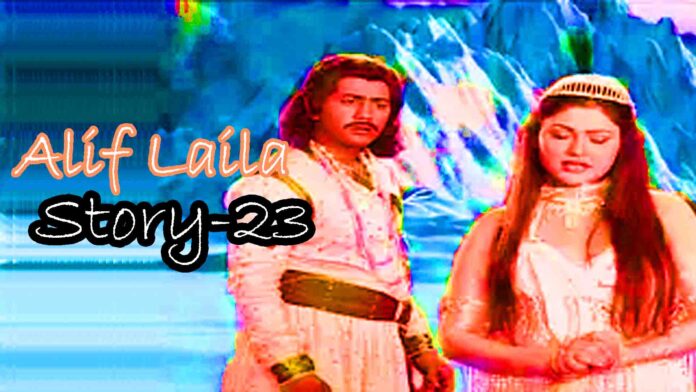 Friends, due to the misfortunes that I faced in my first trip, I had decided that I will not travel on business anymore and I will live happily in my city. But the passivity started bothering me, till I became restless and then decided to take a new journey and see new countries and rivers, mountains etc. So I bought a variety of merchandise and planned a business trip with the merchants of my faith. We boarded a ship and taking the name of God, the captain lifted the anchor of the ship and started on the ship.


We went to many countries and islands and bought and sold everywhere. Then one day our ship came off the shore of a lush green island. There were many trees of beautiful and sweet fruits in that island. We went for a walk on that island. But that island was completely desolate, that is, there was not even a trace of any human, but no bird was also visible. My companions started plucking fruits from the trees but I sat on the edge of a spring, took out food and ate and drank wine with it. The alcohol became a bit excessive and I fell asleep and kept sleeping for a long time. When I opened my eyes, I saw that none of my companions was there and our ship was also sailing ahead in the sea. Within moments the ship disappeared from my eyes.

I was astonished when I saw this. I cannot describe the pain and agony I felt at that time. I was convinced that I would die in this desolate island and there would be no one to take my news. I cried out and started banging my head and chest. I used to curse myself again and again that what little calamities had fallen on you in the very first journey itself, that I took this trouble again. But for how long will he cry? In the end, he got up with the name of God and started roaming here and there that if I find any way, then I should go. I could not see any way, so I climbed a high tree that maybe I could find some place here and there where I could spend the night. But he could not see anything except the trees of the island, the water of the sea and the sky.

After some time on the island I saw a white thing in the distance. I thought that there might be a hideout there, although I did not understand what it was. I got down from the tree and took my leftover food and reached the white thing. It was like a big dome but it had no door. It was a smooth thing that could not even be climbed. It took fifty steps to go around it.


Suddenly I saw that it was dark. I wondered if it was evening time, how did it get dark? Then I saw that a giant bird, which I could not even guess earlier, flies towards me. I was horrified to see him. Then I remembered what I heard from the mouths of some seafarers that there is a very big bird named Rukh. Now I know that that white giant object is the egg of this female stance. The female stood and sat on her egg to incubate it. One of his feet fell near me. Every nail of it was like the root of a big tree. I tied my body tightly to one of his nails with my turban because I hoped that this bird would fly away somewhere.

In the morning the bird flew up and rose so high that the earth could hardly be seen from it. In no time he got down and reached a big forest. As soon as it touched the ground, I untied the knot of my turban and separated from it. At the same time, Rukh caught a very big dragon and took it in its claws and flew away.

Where Rukh had left me was a valley of very low and steep slopes. No human being can have the power to go there. I’m sorry where I have come This place is worse than that island. I saw innumerable diamonds scattered on the land there. Some of them were so big that they were beyond the estimation of the common man. I collected many diamonds and stuffed them in a leather bag. But the joy of meeting the diamonds was momentary because I also saw in the evening that there were many pythons and other huge and terrible snakes roaming around. These snakes used to hide in burrows during the day and come out at night. I luckily found a small cave and hid in it and sat down and closed its mouth tightly with stones so that no python could enter. I ate some of the food I had tied up with me, but I could not sleep through the night because the terrifying whispers of snakes and pythons kept scaring me and I trembled for the rest of the night.

In the morning, the snakes hid again and I went out and slept in an open place. In no time a heavy thing fell near me. The sound opened my eyes. I saw that it was a huge flesh mass. In no time, I saw that similar meat bodies started falling from all sides in the valley. I was very surprised to see all this.


In no time I remembered a thing I heard from the mouths of the seafarers that there are innumerable diamonds in a valley. But no one can go there. Diamond merchants climb the nearby mountains and throw large bodies of flesh in which the diamonds are stuck. After this, giant vultures come and take those meat bodies. When they go to their nests above, the merchants make a loud noise and blow them up and take away the diamonds stuck in the bodies of the flesh.

I was worried at first that how would I get out of this grave-like valley as there was no way to get out even after traveling a lot the previous day. But seeing those meat bodies gave me some hope of getting out. I used the old method. I tied myself to the bottom of a body of flesh. In no time a huge vulture landed and flew away taking the meat body and me with it. I also tightly tied the leather bag that previously contained my food to my waist. And in which I later filled diamonds. The vulture took me to its nest on the top of the mountain. I immediately distanced myself from the meat section.

At the same time many merchants came shouting and the big vulture ran away in fear. The sight of one of those merchants fell on me. Seeing me, he started getting angry at me that why did you come here. He understood that I had gone to the vulture’s nest to steal the diamonds. Other merchants also surrounded me. I said that brothers, if you listen to my story, instead of getting angry on me, you will have mercy on me, I have many diamonds in this bag, I will give all those diamonds to you. Having said this, I narrated my whole story to them and they all were very surprised at my strange story and escape from troubles.

It was the rule of the traders that each vulture’s nest was chosen by each trader. No one except him had any right over the diamonds found there. That’s why the merchant, in whose part that nest was, was angry with me. I reversed my bag. Everyone’s eyes lit up with wonder because I had also filled many very big diamonds. I told the merchant, in whose part the nest was, that you take all these diamonds. He said that these diamonds are yours, I will not take any of them. But when I insisted a lot, he took one big diamond and two or four small diamonds and said that this money is enough for me to live comfortably for the rest of my life and I will not need to come here again and get diamonds.


I spent the night with the same traders. He asked me to know my story in detail and I narrated all the experiences to him. I couldn’t believe my luck like myself. On the second day, with the same merchants, Ruha reached Nami Island. Here too big snakes were full. We were lucky that we were not harmed by those snakes.

There were huge camphor trees in Ruha Island. Cut the twigs of the camphor tree with a knife and keep a pot at the bottom. The juice of the tree comes out and gets stored in the pot and this is fiercely called camphor. When all the juice is released, the twig withers and dries up. The camphor tree is so big that a hundred people can sit in its shade. There is an animal in that island which is called a unicorn. He is bigger than the buffalo and smaller than the elephant. He has a long horn on his nose. The picture of a man in white is made on that horn. It is said that the unicorn kills the elephant by inserting its horn into its stomach and lifting it on its head. But when an elephant’s blood and fat fall in its eyes, it becomes blind. In such a situation, the rukh bird comes and flies away by pressing both the rhinoceros and the elephant in its claws and goes to its nest and feeds their young to their meat.

Passing through that island, I went to many other islands and bought valuables there in exchange for my diamonds. In this way, doing business in many islands and countries, reached the port of Basra and from there to Baghdad. I had accumulated a lot of money in this journey as well. I donated a lot of it and satisfied many poor people with money. After finishing the account of his second Sagar Yatra, Sindbad sent off by giving four hundred dinars to Hindbad and said that if you come here tomorrow at this time, I will tell you the story of my third Sagar Yatra. Hearing this, Hindbad also thanked him and left and other people present too.

On the third day at the appointed time, Hindbad and other friends came to Sindbad’s house. At the end of the lunch, Sindbad said, Friends, now listen to the story of my third journey, which is no less strange than the first two.