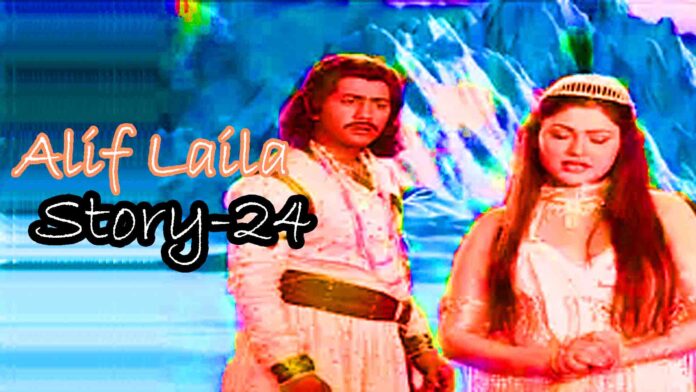 When Shahrzad finished this story, Shahryar, who had found all the stories very interesting, asked that you know any other story as well. Shehrzad said that many stories come. Saying this he started the story of Sindbad Jahazi.


He said that during the reign of this Caliph Harun Rashid, there lived a poor laborer whose name was Hindbad. One day when it was very hot, he was going from one part of the city to another carrying a heavy load. Exhausted on the way, he descended into a street, which had been sprinkled with rose water and where the cold wind was blowing, and sat down to rest under the shadow of the wall of a large house. Perfumes, flowers and all kinds of other fragrances were coming from that house, along with it the lovely chirping of birds could be heard from one side and on the other side, where was the kitchen, the aroma of cooking various kinds of dishes. He thought that it looked like the house of some very big man, he should know whose.

Hearing this, Hindbad raised his hands towards the sky and said, ‘What injustice is this, O Lord who created and sustains the world. One is this Sindbad who radiates day and night, and I am Hindbad, who works hard night and day to feed his children and women. He and I are both human. What is the difference?’ Having said this, as if to express his anger at the Lord, he stomped on the earth and shook his head in despair and began to grieve over his misfortune.


At that time a servant came out of that huge building and holding his arm said, ‘Come on, our master Sindbad has called you.’ Hindbad was very scared to hear this. He thought that Sindbad had heard what I said and in a fit of rage sent me to punish me for this misbehavior. He started panicking and said that I will not go inside, my burden is lying here, someone will take it away. But the servants did not leave him. He said that we will keep your burden inside safely and you will also not be harmed. Hindbad argued with the servants for a long time but to no avail and eventually he had to go inside the palace with them.

The servant took Hindbad through several courtyards to a large hallway where many people were sitting to eat. A variety of dishes were kept there, and in the midst of all this sat a splendid rich man, with a white beard hanging down to his chest. Behind him stood a whole group of servants with folded hands. Hindbad was horrified to see this opulence. He bowed down and saluted the rich. Sindbad did not pay attention to his torn and dirty clothes and cheerfully replied to his salute and, sitting on his right side, raised him with his hand in front of him and placed a bowl of delicious food and drink. When Sindbad saw that all those present had eaten, he again turned his attention to Hindbad.

In Baghdad, when someone had to address respectfully, it was called Arabic. Sindbad said to Hindbad, ‘Arabic, what is your name. I and others present here are very happy with your presence here. Now I want to hear from your mouth again those things which you said while sitting in the street.’ The part where Sindbad was sitting was adjacent to the street and from the open window he had heard everything that Hindbad had said in a state of fury.

Hindbad lowered his head in shame and said, ‘Sarkar, at that time I was not in a hurry because of fatigue and heat. Some inappropriate things had come out of my mouth in such a condition. I do not wish to beg to repeat them in this meeting. Please forgive my insolence.’


Sindbad said, ‘Brother, I am not a tyrant who should harm someone just because of some things. I did not get angry but pity on your words and was even more saddened to see your condition. But my brother, what you said while sitting in the street only reveals your ignorance. You understand that I have got this wealth and this opulence without doing anything. It’s not like that. I have faced almost all the calamities that can happen in the world. It is only after this that God has given me this material of comfort.’

Saying this Sindbad said to the other guests, ‘I have had great troubles and very strange experiences in the last years. You will be very surprised to hear my story. I made seven great journeys for the purpose of getting money and suffered great sorrows and sufferings. If you guys want, I can narrate all that story.’ The guests said that definitely listen. Sindbad asked his servants to deliver the burden which was being taken from Hindbad market to his house. He did the same. Now Sindbad started telling the account of his first journey.