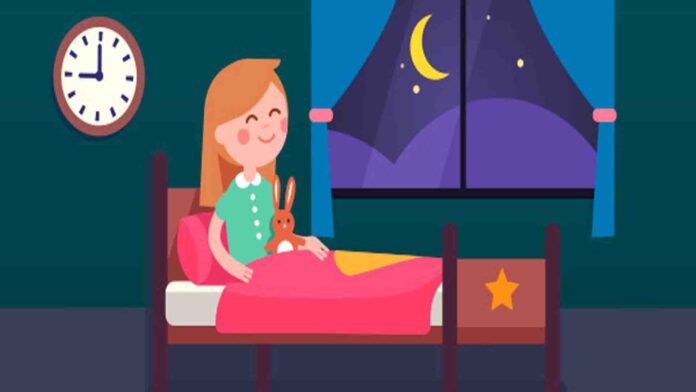 Do you want to know the story of a great scare that ended with a chocolate flavor?

One summer night little Laura was lying on her little bed. It was very hot, and since he was not able to sleep, he entertained himself by looking at the beautiful full moon through the open window, while thinking:


– It is so white and luminous … A lantern lighting up the world seems great!

She was relaxed and happy looking at the sky when suddenly, on the study table that was placed under the window, she made out a strange silhouette against the light. He took a good look if it was one of his wrists, but he immediately realized that not because … the silhouette in question began to move from side to side uncontrollably!

A horrible sense of dread ran through his body from head to toe and he screamed.

The girl was beside herself because she thought she had seen a terrifying being, but in reality it was a harmless mouse that had sneaked into the bedroom looking for breadcrumbs.


The reaction of the innocent animal upon hearing the screams was also championship. At the first scream he gave a boat that almost touched the ceiling; Immediately afterwards he fled to hide in the first place he found, and this was… Laura’s bed! Not knowing where he was getting himself, he jumped onto the mattress and slipped between the sheets, completely dazed and disoriented.

It was then that something unexpected happened that further complicated the situation: inadvertently, his furry body brushed the girl’s feet and when she noticed it, she began to scream even more creepy.

– Aghgggggh!… Aghgggggh!… Mom, Mom, help me! Now the monster has gotten into my bed and wants to attack me!

As you can imagine, after contact with the supposed monster the girl was terrified, but … what about the mouse? Well, the poor man also got the scare of his life! As he had never seen a human being, when Laura’s cold feet touched him he panicked. It was then that she got up from the bed to hide in the corner, and he, with spiky hairs, took the opportunity to sneak away in the opposite direction. In fact, he ran at a thousand an hour until, thanks to his keen sense of smell, he located the little hole that communicated with his burrow.


The mother mouse saw him arrive with tears in his eyes and shaking like jelly.

– But son, what’s wrong with you? Not that you had seen a ghost!

The young rodent hugged her.

– Mommy, you don’t know how bad I’ve been! I went out to find something to eat and I don’t know how I ended up in a place where there was a huge monster that kept screaming. It has been the worst experience of my entire life!

The mouse tried to calm her son with a good deal of pampering. Caressing her head, he said:

– Easy, little boy, you’re safe. Next time you have to be a little more careful to avoid getting into unpleasant situations, okay? …

– Yes mom. I don’t want to see such a monster anymore!

– Of course not, my son. Come, I’m going to give you something that I know you like a lot to make you feel better.

The little mouse gladly accepted the chocolate bar that his mother gave him and began to gnaw on it. For a little while he enjoyed the delicious sugary cocoa flavor that he was so excited about like never before. Without realizing it, he calmed down and began to yawn.

Meanwhile, Laura’s mother, alerted by the screams, had rushed to the girl’s room. He found her in a corner, sitting with her head between her legs and shivering with fear.

– But what’s the matter with you, darling? What are you doing there and why are you screaming like that?

Laura threw herself into his arms.

“Oh, Mom, something terrible has happened!” There was a monster in my bedroom and the very soulless one got into my bed because he wanted to attack me … I’m very scared!

The woman held her against her chest.

– Honey, monsters don’t exist! Take a deep breath, it’s all over. Look closely, there is no one here!

– Monsters only live in stories, they are false. Come on, go back to bed, I’ll stay with you until you fall asleep, okay?

Laura rested her head on the pillow and her mother gave her a kiss on the forehead; then the lady reached into the pocket of her robe with her right hand.

– Oops, what I have hidden here! … Since I know you love it, I’ll let you eat it before going to sleep so that the annoyance will go away!


Wrapped in silver-colored paper, he took out … a piece of chocolate! The little girl was very happy because it was what she liked the most in the world. He stuck it to the palate and savored it very slowly until there was not even a bit left. It was so delicious!… Thanks to the company of his mother and the surprise gift, the fears evaporated like smoke and disappeared.

At last silence completely took over the home, and both the mouse and the girl fell asleep peacefully, each in his room, each in his bed, each with his mother, but both with the same chocolate flavor in them. the little mouth.

And so, between sweet dreams, this beautiful story ends that, as you can see, confirms something we all know: monsters do not exist! What it does not clarify well is the other question: who scared whom?