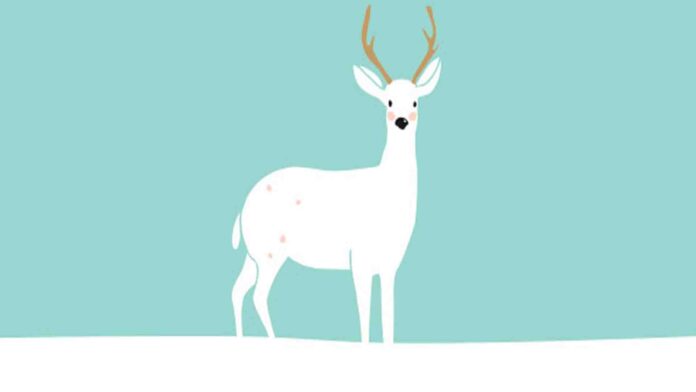 Many years ago a beautiful black tiger and a beautiful white deer lived in the Amazon jungle. Neither of them had a home so they lived their lives outdoors and slept under the blanket of stars at night.

As time went by, the deer began to miss shelter indoors and decided to build a cabin. Very excited about the project, he chose a clearing in the forest and planned the work well.

– My first objective will be to nibble the grass until I leave the ground very smooth. Without a good foundation there is no house that will resist!

He worked hard all day, and when he saw that he had served his purpose, he lay down to sleep on a bed of flowers.

He could not imagine that the black tiger, also fed up with living in the open, had had the same idea that day and had just chosen the same place to build his home!


– I’m sick of getting wet when it rains and scorching under the sun during the summer months! I will make a small but very comfortable cabin for my use and enjoyment. It will be great!

He reached the forest clearing just as the moon was rising and was surprised to see that there were no weeds on the ground.

– Oh, how strange! … I know this place well and it has always been covered with weeds … It must have been the Tulpa god who wanted to help me and smoothed it out for me. Well, that will make it easier for me! I’ll start building right now!

Without wasting time he got down to work; He took sticks and stones and placed them on the ground to make a firm and sturdy ground. When he finished, he headed to the river for a refreshing swim.

In the morning, the deer returned to continue the task and was amazed!

– Whoops! How is it possible that the floor of the hut is already laid?!… I suppose the god Tulpa did it to give me a cable. It’s fantastic!

Very happy, he began to drag logs to raise the walls of the rooms. He worked non-stop and when it started to get dark he went to get something for dinner. He wanted to go to bed early so he could get up early!

Late at night, the black tiger arrived. Like all cats, he could see very well in the dark and it was no problem for him to work without light.

His jaw dropped when he saw the walls perfectly standing on the ground in a perfect square!

– But what a wonder! … The god Tulpa has helped me again and has built the walls for me! As soon as I mount the roof, I’ll finish it.

He placed large branches side by side on the walls and then covered them with leaves.

– The roof is ready and the cabin is perfect! Anyway, I think I’ve earned a good rest… I’m going to open my new room!

Yawning, he entered one of the two rooms and lay down comfortably until sleep overcame him. It was a very sleepy animal, so he did not know of the arrival of the deer at dawn nor could he see its astonished face when it saw the work completely finished.

– Oh god Tulpa! But how generous you are! You put up the roof overnight! Thank you so much, I love my new cabin!

Happy as a partridge he entered the empty room and fell asleep too.


At noon the sun rose to the top of the sky and woke up the two animals with its intense rays of light; they both stretched out, left their room at the same time and… they found themselves face to face!
The scare they got was a big nose! Both of them froze, looking at each other with disheveled faces and stiff hairs like spikes. After all, they were natural enemies and they were under the same roof!

Neither attacked the other; they simply stayed for a long time watching each other until they realized what had happened. They had unknowingly made the cabin between the two of them!

The deer, trying to keep calm, said to the black tiger:

– I see that you are as surprised as I am, but since we have the same right over this home, what do you think if we share it?

– It seems fair and very practical to me! If you want, every day one of us will go hunting to bring food home. Is that okay?

– Sounds like a great idea to me! Meanwhile, the other can take care of daily chores like cleaning dust and sweeping.

They clapped their paws to seal the agreement and began to live together enthusiastically and full of good intentions.

The first thing to do was get food and by lot he had to go out to hunt the tiger. He returned an hour later with a prey that the deer did not like because it was a deer … a white deer like him!

– What an unpleasant situation, tiger friend! This animal is of the same species and as you will understand, I am not going to try it.

He went to his room in disgust and couldn’t sleep.

– “Oh, how uneasy I feel! The black tiger has hunted a deer like me… It’s terrible! What if one day he decides to attack me? ”

The poor man couldn’t get to sleep all night, but he got up at dawn because it was his turn to go out to find food.

He wandered around for a while and met some friends who helped him set up a trap to catch a tiger. When he came home with the trophy, his partner was speechless and of course refused to sink his teeth into him.

– Do you want me, who am a tiger, to eat another tiger? Not jokingly, I am incapable!

As he said this, he went to his room with a nervousness that he could not control.

– “This deer seems fragile but it has been able to hunt a tiger my size. What if it throws itself on me while I sleep? I must not trust myself that appearances are deceiving and I am a fool I have nothing. ”

Silence and darkness took over the forest. All the animals slept peacefully except the deer and the tiger, who spent the night awake and on alert because neither trusted the other.

When no one was expecting him, around five in the morning, a deafening noise was heard:

The two were so scared and tense that when they heard the noise they fled in opposite directions, without stopping to check where the sound was coming from. Both of them put their feet in dust, thinking that their friend wanted to attack him.

The beautiful black tiger and the gorgeous white deer never met again because the two made sure to get well away from their possible enemy.


The tiger tried to rebuild his life in the north, but he always felt sadder than usual because he missed the deer.

– What a shame to end up like this! The truth is that we got along very well and I would never have hurt him but of course… I can’t say the same about him!

For its part, at the other end of the forest, in the southern area, the deer wailed incessantly:

– How cute was the black tiger! We were a great team and we could have been great friends… I would never have hurt him but maybe he would have hurt me and it is better to be safe.

And that was how each one had to go back to look for a clearing in the forest to build a new cabin, this time with only one room.

Moral: If the tiger and the deer had spoken instead of distrusting each other, they would have discovered that neither of them had anything to fear because they were both trustworthy and appreciated each other.

This story teaches us that our best weapon is the word. Saying what we feel or what concerns us to our friends is the best way to live calmly and in confidence.