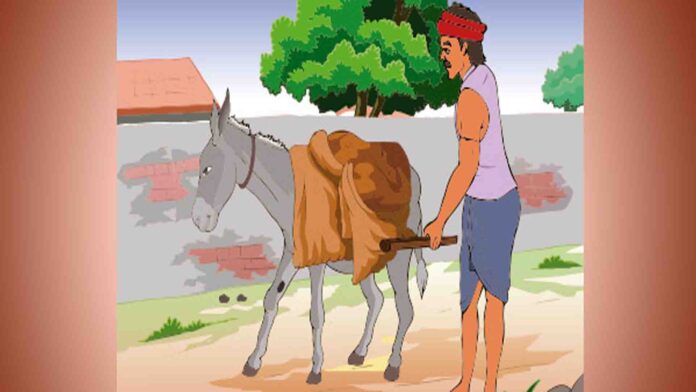 Once upon a time there was a merchant in India who made a living selling olives in the big city. The journey from his village to the market was long, so every morning he placed the merchandise on the back of his inseparable gray-haired donkey, and when it was ready they left together for their destination.


Thanks to the fact that the donkey was strong, fast and in very good health, the sacks always arrived in perfect condition at the point of sale. The merchant appreciated the animal’s daily effort and was proud of how well he worked, but to tell the truth there was one thing about him that annoyed him a lot: he ate much more than any other of his kind! The reason was that since he was carrying so much weight, he was spending a lot of energy, and by spending a lot of energy, he needed to continuously replenish his strength. The man, a good person but very stingy, used to complain to the rest of the merchants about how expensive it was to feed him eight times a day.

– I don’t know how much your donkeys eat, but of course this one eats more than an elephant… He’s getting very fat and it’s getting harder and harder for me to maintain him!

One night he began to review the benefits of the month and verified that the accounts did not come out. Angry, he threw his hands to his head and began to curse.


– This greedy donkey is my ruin! He gobbles up so much that half of what I earn goes on buying bags of alfalfa to whet his appetite. This can not go on like this!

Absolutely determined to find a solution, he closed his eyes and began to meditate.

– Now that I think about it, every day I pass by a farm where alfalfa grows by the bucketload and… Of course, why didn’t I think of it before!… I can take my gluttonous donkey there and let it gorge itself without spending a lot of money. a single coin!

The plan was pretty good, but…

– The only drawback is that the land has an owner. If I sneak in the donkey and the foreman in charge of guarding the land sees it, he’ll call the guards and… Oh no, they’ll charge me with trespassing and I’ll end up in jail like a common petty thief!

To achieve his purpose safely, he had to perfect the maneuver.


– I know what to do! I’ll buy a lion skin, put it on the donkey, and then I’ll turn it loose on the farm. The foreman will think that it is a wild beast and will not dare to do anything to it. Whoo, whoo, whoo!

Believing that he had designed a masterful plan, he got to work, and in a few hours he obtained a beautiful orange lion’s fur that he placed over the animal as if it were a huge cloak.

She moved away from him to look at him from different angles. He wanted to make sure he hit the mark!

– Seen up close you can see that it is a donkey in disguise, but from a distance it seems just like the king of the jungle. It’s great, great, great!

When he was convinced that success was assured, he took him to the farm and put him inside the enclosure, well away from the entrance so that he could eat in peace and as he pleased. He, meanwhile, hid behind a tree so as not to be discovered.


Five minutes later the foreman appeared and everything went according to plan: as soon as the man discovered that a dangerous lion was walking through his domain, he began to scream like a madman and fled in fear. The merchant chuckled.

In view of the triumph the next day he repeated the operation. The donkey, dressed in lion skin, infiltrated the farm again to turn purple with alfalfa and also again, in the middle of tasting, the foreman appeared. Needless to say, when he saw the fearsome lion roaming freely on his land, he jumped to his feet, completely terrified. The merchant, hidden in the undergrowth, burst out laughing.

– Ha, ha, ha!… Oh, what fun!… The clumsy man hasn’t realized that this beast is more fake than a leather coin! If only he knew that he is just a poor ass incapable of hurting a fly… Ha ha ha!

The scene was repeated over and over again for a week, but on the eighth day things changed: yes, the foreman ran again like there was no tomorrow, but instead of going to hide in his house he decided to act bravely and ask help your neighbors. In less than a rooster sings, he brought together more than thirty men and women who, armed with broomsticks, agreed to go teach the terrifying beast a lesson. He, of course, took the lead.

– That lion’s days are numbered!… We will force him to leave! Let’s go friends!

They crossed the field in single file and soon reached the farm. When they stopped next to the fence, they saw with their own eyes that it was a lion with very long legs and an enormous height. Why lie: everyone felt genuine fear and wanted to throw in the towel!

– I warned you that it was a gigantic beast, but we have to get it out of here no matter what. These days it has been in the lands in my charge, but tomorrow it could invade yours to eat the grass, or what is worse, attack the cattle. Let’s park the fear and put an end to this dangerous being. United We’ll overcome!

The neighbors, understanding that he was absolutely right, raised their sticks like swords and, as if they were part of a small army, prepared for the assault. At that very moment the donkey heard voices, raised his head, and saw that a troop armed to the eyebrows was looking at him threateningly. Faced with such a vision, he had three chain reactions: the first, to remain petrified; the second, put on a face of panic; the third, start screaming like crazy.

The neighbors fell silent and looked at each other in bewilderment.

Yes, they had heard correctly: they weren’t roars… they were braying! As you can imagine they were stunned, but the big surprise came when the animal suddenly started running in the opposite direction and the lion skin fell on the dry grass. The foreman, hallucinated, shouted:

– The lion was a donkey!… A simple and harmless donkey!

A donkey?! Members of the group threw their broomsticks into the air and fell to the ground, laughing their heads off. Of all, the one who laughed the most was the foreman.

Yes, it was certainly a happy and fun ending for the neighbors, but not for the merchant who, from his hiding place, watched helplessly as the donkey ran terrified, jumped the fence and disappeared forever because of his greed.