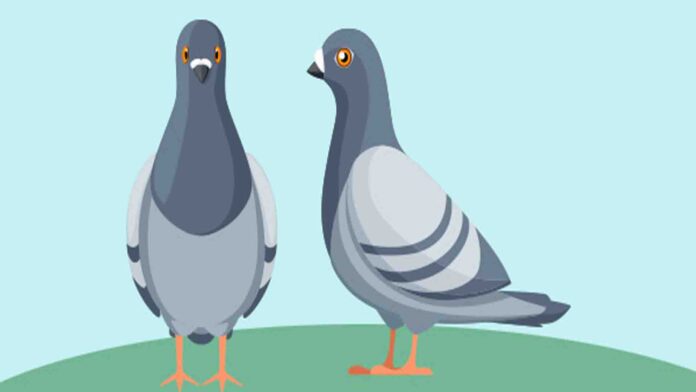 Formerly, in the old Chinese city of Handan, there was a strange and very curious custom that called the attention of all those who came from other parts of the country.


The people of Handan knew that their beloved king adored pigeons and for this reason they hunted them throughout the year to give them as gifts.

One day in and the other too, peasants, merchants and many other people of different conditions, presented themselves at the palace with two or three wild pigeons. The monarch accepted them excitedly and then locked them in large iron cages located in a glass gallery that overlooked the garden.

Surely you are wondering why he wanted so many pigeons, right?… Well, the truth is that the people of Handan also wondered the same as you. Everyone was very intrigued and rumors of all kinds spread, but the fact is that no one ever dared to investigate the matter in depth for fear of reprisals. After all, the king had the right to do what he wanted! !


Years passed and it happened that, one spring morning, a very determined young man stood before the sovereign with ten pigeons that stirred nervously inside a large wicker basket. The monarch was frankly enthusiastic.

– Thank you for your gift, little boy. You bring me nothing more and nothing less than a dozen pigeons! Surely you had to work hard to catch them and I appreciate that. Here, have some coins, you deserve them!

Seeing that the sovereign seemed to be a happy and cordial man, she decided to ask him what he wanted them for.

– Highness, forgive my indiscretion but I am very intrigued. Why do you like it so much that your subjects give you pigeons?

The monarch opened his eyes and smiled from ear to ear.

– You’re the first to ask me in thirty years! You show bravery and that says a lot about you! I have no problem answering you because I do it for a good cause.


She stared at him and continued speaking ceremoniously.

– Every year, on New Year’s Day, I carry out the same ritual: I order the cages to be taken out into the garden and I let thousands of pigeons free. It is a beautiful spectacle to see how these birds take flight to the sky and leave never to return!

The boy scratched his head and looked as if he did not understand the explanation. Hesitating, he asked a new question.

“I suppose it’s a fantastic display but… is that the only reason you’re doing it, sir?

The king sighed deeply and, puffing out his chest, answered proudly:

– No, boy, no… Mainly I do it because by releasing them I am showing that I am a compassionate and benevolent person. I like to do good deeds and I feel very good giving these little animals the most precious thing a living being can have: freedom!

The young man was stunned! No matter how many times he gave it, he did not understand where the goodness was in that act. Far from remaining silent, he addressed the sovereign again.

– Excuse my boldness, but if possible I would like to make a reflection.

The king was still in a fantastic good mood and agreed to listen to what the boy had to say.

– I have no problem. Speak without fear!

– As you know, many of us citizens spend hours hunting pigeons for you; and yes, it is true that we catch many, but in the attempt others die because we inadvertently hurt them. Out of every ten that we manage to capture, one loses her life hooked in the net. If you really consider yourself a good man, you had better ban their hunting.


As if he had a spring under his royal buttocks, the monarch jumped from the throne, his deep voice echoing off the walls of the great hall.

– Are you telling me to ban their hunting, whipper?! How dare you…?!

The young man was not intimidated and continued with his reasoning.

– Yes, sir, I propose that! Due to hunting, many pigeons die without remedy and those that survive spend months locked in cages waiting to be released. I don’t understand!… Doesn’t it seem absurd to keep them captive for so long? They have already been born free! If I were a dove, I would have nothing to thank you for.

The king was silent. Until that moment he had never stopped to think about the consequences of his actions. Believing that he was doing good, he was depriving thousands of pigeons of liberty every year just for the pleasure of releasing them.

After a while absorbed in his thoughts he recognized his mistake.

– All right, little boy! I will tell you that your words have made me change my mind. You are absolutely right: this tradition does not make me a good person and neither does it make me a more just king. Today I will have it banned completely!

Before the boy could say anything, the monarch snapped his fingers and a servant brought him a golden box adorned with impressive rubies, red as fire. He opened it, took out a cloth bag full of gold coins and handed it to the young man.

– Your advice has been the best I have received in many years so here is a good amount of money as a token of my appreciation. I think it will be enough for you to live well for a few years, but if you ever need something, don’t hesitate to come to me.

The boy put the bag in his pants pocket, bowed very respectfully, and feeling very happy returned to his home. The story spread throughout Handan and the mystery of the pigeons was solved.

Moral: Before doing something or making an important decision, we should always think carefully about the consequences to make sure that we are not causing harm to others.