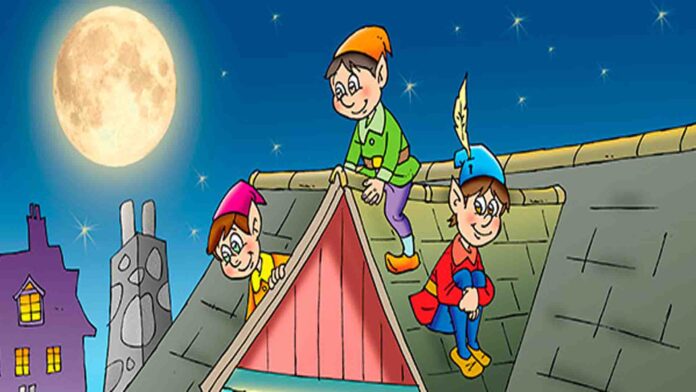 In a small village lost in the mountains, there was a very cute little house where a woman lived who dedicated herself body and soul to taking care of her beloved baby.


The little guy was a real cutie. She had blonde hair, chubby rosy cheeks, and when she smiled she showed two little teeth as white as snowflakes. He was so pretty and so sweet that his mom drooled and spent hours looking at him.

He felt so happy by his side!… Every day he fed him with great care so that he would grow healthy and strong. After eating, she would put his pajamas on so he would be warm and rock him to the sound of the sweetest lullabies. As soon as the little one fell asleep, he would close the shutters so that the light wouldn’t bother him and take advantage of that quiet time to do household chores, such as fetching water from the fountain, peeling potatoes or bleaching clothes in the sun.

But one day in April, something tremendous happened: some prankster elves sneaked into the baby’s room, jumped into the crib and took him away. Instead, they placed on the mattress a hideous monster with a huge head and bulging eyes like those of a giant toad.

When after a while the good woman went to wake up her little boy, she raised her hands to her face and a terrifying cry came from her mouth.


– Oh, how horrible! What is this horrible being? Where is my child?

Desperate, she began to search the entire room, but there was no one. It seemed that the earth had swallowed him! Only the growls of the hideous monster could be heard, kicking between the sheets with its gaze fixed on the ceiling.

She left there crazy and ran to the neighbor’s house to ask for help.

The neighbor opened the lock and saw the poor girl crying and making a fuss.

– What’s the matter? Calm down and tell me what happens!

– It’s horrible, Maria! Someone has kidnapped my little boy!

– But what are you saying? Only good and respectable people live in this town. No one would do such a thing!

– I tell you that my son is no longer here! He was sleeping in his crib and when I went to get him, he had disappeared. Someone kidnapped him and left in his place a monster, a terrifying and disgusting being!

The neighbor put on a face of circumstances and began to connect the dots.

– I think I understand everything… This is a matter of the elves of the forest. They are always playing heavy jokes and in bad taste! I’ll tell you what you’re going to do to get your son back.

– Don’t worry, it’s simple. Listen to me carefully. Take the monster, take it to the kitchen and sit it on a small chair near the fireplace. Then turn it on, put a saucepan of water on the fire, and when it boils, put two eggshells inside.

– But for what? It sounds absurd!


– It is not! That will make him laugh and get the attention of the goblins. In less than a rooster sings, they will appear in your house, you’ll see.

– Come on, come on, don’t waste time and do what I tell you!

The mother returned home thinking that her neighbor’s remedy was the biggest nonsense she had ever heard, but she had no choice but to try it.

He went up the steps that led to his son’s room two at a time and grabbed the monster trying not to look at how ugly it was. Afterward, he sat him on a small chair and tied him with a strap to prevent him from falling. He lit the fireplace, took two eggs, discarded the whites and yolks, and put the empty shells to boil in a small metal pot. In silence, the woman hid under a table to wait.

Suddenly, the little monster, who had not missed a single detail of such a strange operation, shouted:

but in life I saw no one,

boil an eggshell in water!

And then he began to laugh heartily.

– Hahaha! Hahaha! Oh how funny is this! I burst out laughing!

His laughter was so exaggerated that it went through the front door of the house and echoed through the woods. Of course, the echo reached the ears of the goblins and they recognized the voice of the monster. As the neighbor had foreseen, it didn’t take long for them to come out of their shelters, dying of curiosity. They were crazy to see what was so amusing that those laughs would produce!

They crossed the garden, climbed through the windows, and through the glass they saw the little monster, sitting on a chair, laughing his ass off. The goblins were infected and also began to laugh nonstop.

There was no doubt! That monster was so much more fun than the kid, who did nothing but eat, sleep and cry from time to time. Neither short nor lazy, they slipped through the crack under the door, and made the change: they took the monster and left the bored human baby in the crib.

As soon as the commotion was over, the mother pounced on her little one to eat him with kisses. What joy! The idea had worked!

And that’s how, thanks to a strange trick, the woman in this story got her beloved son back. The elves of the forest, meanwhile, did not appear in the village again and stayed forever with the ugly but cute little monster that made them laugh so much.