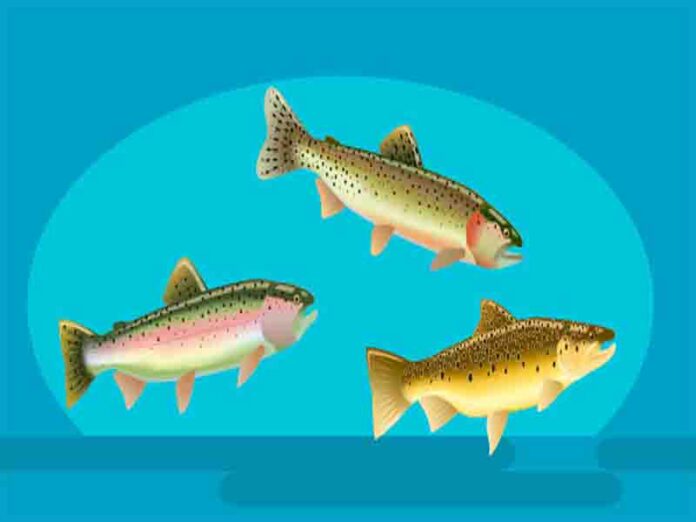 The three trout a horror story for kids | Story for Childrens

Provider, Pensadora and Lazy were three young trout that lived in a huge lake with cold and crystalline waters. At first glance it was almost impossible to distinguish them because they were the same size and identical silver skin dotted with dark specks, but in terms of character and way of being they were completely different.

Foresight had a great quality: prudence. Neither in that lake nor in the nearby streams was there a trout more serious, sensible and responsible than her. From a very young age, Previsora ​​thought that to avoid dangers it was essential to always live alert, attentive to what was happening around her. She was so formal and cautious that the famous saying “Better safe than sorry” seemed to suit her.


Thinker had a more cheerful character and a positive attitude towards the challenges of life. Unlike Forecaster, she was a little crazy, but she also had a great quality that distinguished her from her peers: the ability to think. That virtue gave her a lot of self-confidence since when she was in trouble or had to resolve a conflict, she just had to stop for a few seconds to reflect and make the right decision.

Lazy was lazy, boring and very simple, so the name defined her perfectly. She was never interested in anything but herself and was often sullen and unfriendly to everyone. Since she didn’t care about being ignorant, she wasted her life wandering around with nothing interesting to do or to contribute to her community.

Once the presentations are done, I will tell you what happened on a warm summer day in the wonderful place where they lived. It turns out that the three trout were swimming so happy when, suddenly, they were startled by the presence of a man. It was the first time that a being so rare and so great had set foot in that territory, so no one knew what he was doing there or what his intentions were. Faced with this unknown situation, each one reacted in a particular way.


He didn’t even stop to see if he was right! At the slightest doubt she submerged and hid behind some stones at the bottom so as not to be discovered.

Unlike her companion, Thinker could not intuit the danger and raised her head from the water to carefully observe the human. She noticed how gigantic it was, its grumpy face and the wicker basket that it placed on the grass, but the truth is that it did not feel threatened until it saw that it removed an immense net from inside and began to unfold it while he looked where she was.

– ‘I don’t like this one bit! It hits me that this guy is what our grandparents call… a fisherman! ‘

In that instant it dawned on her that she had to escape if she didn’t want to end up in a frying pan at dinner; yes, I had to do it cautiously because at the slightest mistake, goodbye.

– ‘I am about to be captured, but my intelligence will save me from almost certain death.’

Instead of running away on her nerves, she chose to stay still and take a deep breath to relax. Then he began to do what he did best: think.

– ‘I think… I think I already have the solution.’

Stopping to reflect was very effective as he immediately devised a plan to get out of the quagmire.

– Of course the best thing is to play dead!

Demonstrating great acting skills, she lay on her back with her belly looking up at the sky, rolled her eyes to blank them, and stretched her flippers to look like a lifeless animal. She pretended so well that the truth is that it was painful to see her!

Moments later, the fisherman gathered momentum to cast the net, but when he went to release it, something made him change his mind.

– What is that floating on the right side of the lake? It looks like a dead trout. Yuck, yuck!… I’d better throw the net to the left.


As soon as the fisherman looked the other way, Pensadora took the opportunity to whistle off and camouflage herself behind some aquatic plants.

Forecaster and Thinker managed to escape, but what happened to Sloth? As expected, she didn’t worry about anything and continued lounging around as if that wasn’t the thing with her. He did not imagine the danger, nor did he take precautions, nor did he stop to think of anything at all. Inevitably, he fell into the fisherman’s nets.

Moral: This ancient tale teaches us that in life it is important to be proactive. This means that if you ever feel like something or someone might hurt you, it’s best to get away before it’s too late. That did the first trout and it came out well standing.

If your intuition fails you and you suddenly find yourself in a problem or unpleasant situation, do not despair and stop to think, because like the second trout, by reasoning you will find a good solution.