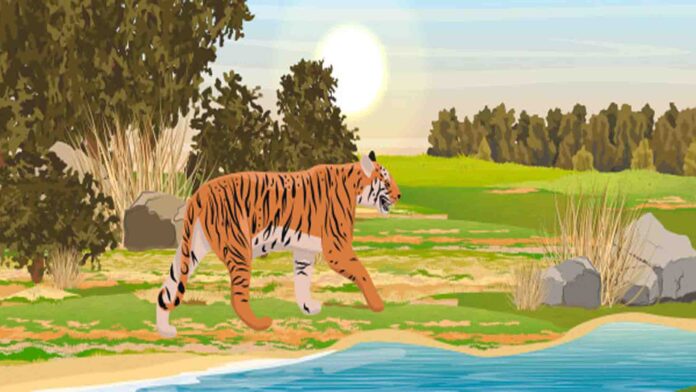 The Tigers Reading for Grade 5th and Grade 6th

Tigers are the largest cats in the world. Although there are several subspecies of tigers, most have beautiful orange fur, white bellies, and multiple brown or black stripes all over their bodies. These stripes help them to camouflage themselves among the vegetation and are different in each specimen. They say that if all the tigers in the world were placed before our eyes, we would be able to distinguish one from another perfectly.


Tigers are incredible hunters and adapt their diet to where they live, that is, they willingly eat what is closest to hand. Their night vision is excellent and that is why they prefer to hunt when the sun disappears over the horizon.

With their roars they drive away possible enemies and instill fear in their victims. They have a very big advantage, which is that they run at great speed and have an amazing ability to jump on their prey, immobilize them with their claws and the enormous weight of their body, and finally kill them with a bite on the neck.

Although they sometimes catch rabbits or monkeys, they usually go for the larger animals, whether they are herbivores (deer, buffalo…) or carnivores like them (hyenas, wolves, bears…) Few animals escape the fast, agile and clever tigers! As if this were not enough, they are excellent swimmers, even capable of catching fish.


Unlike lions, tigers do not go in packs because they prefer to roam large territories on their own and lead a solitary life. In fact, tigers and tigresses only interact during the mating season. After fertilization, the female carries her young in her womb for twelve weeks. The size of the litter is usually about three puppies, although sometimes more are born. The little tigers depend totally on their mother to survive, since she is the one who feeds them and teaches them to defend themselves until they are two years old, which is when they become independent beings.

Currently there are only tigers living in the wild on one continent: Asia. They are most commonly found in forests, but also in mangroves, rocky terrain, savannahs… Their ability to adapt is impressive!

Unfortunately, the beautiful tiger is an endangered species. To give you an idea, of the most abundant subspecies that is the Bengal tiger, there are less than two thousand copies left. This chilling fact should serve to make us reflect on the devastating effect that human beings have on wildlife and take measures to prevent these incredible animals from disappearing from the face of the Earth.