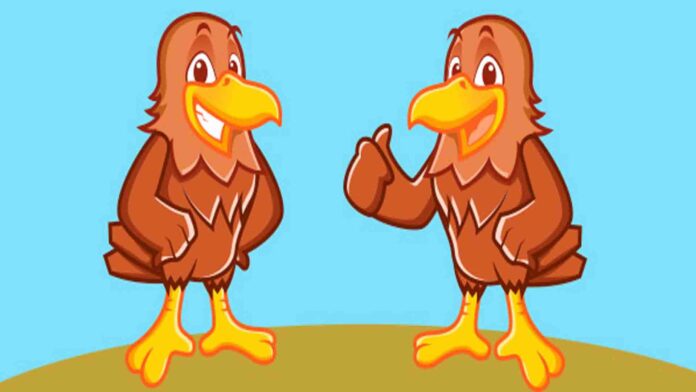 Once upon a time there was a king who lived in a distant country. It was well known throughout the kingdom that he was a great lover of animals, so on one occasion, he received a gift for his birthday that made him very happy. They were two cute falcon hatchlings.


The king was excited. They were beautiful and looked like two cotton balls.

– How soft they are! – He said to his family while caressing them – I’m going to make them expert hunters! Let the falconry master come right now!

In a matter of minutes, a short but strong man like a bull appeared in the room. He was the most experienced falconry master in the kingdom. His job was to care for and train the king’s falcons from hatching. The monarch fully trusted his work, since there was no one who knew more about birds than him for many kilometers around.

– They just gave me these two falcons. I know you will take care of them and train them with care – said the king with a smile – Take them and keep me informed of their evolution.

– I will do so, Your Majesty – answered the expert making a farewell bow.

After a while, the master falconer asked for an audience with the king and he received him seated on his throne of gold and velvet.

– Your Majesty, I have something very important to tell you. You see… I’ve been taking care of your new falcons for weeks and trying to teach them the art of flying. They are both grown and beautiful, but something very strange happens. One of them flies skillfully and very quickly, but the other has not moved from a branch since the first day.

– And what do you think is the reason for this strange behavior? – The king consulted him, making a face of astonishment.

– I don’t know, sir… I’ve never seen a falcon behave like that.

– Okay, we will call the best healers in the kingdom to make a diagnosis and advise us- sentenced the monarch.


So it was. As many as nine healers passed through the palace to explore the animal, but none found a reasonable reason why the bird refused to move from the tree. The king then made the decision to offer a good reward to the person who was able to make his falcon fly.

The next day a ray of sunlight entered the king’s bedroom while he slept peacefully in his huge bed. The light reflected on his face and woke him up. With his eyes still half-closed, he looked out the window like every day to see the sunrise. In the distance he made out the figure of a bird that was approaching flapping its wings to end up perching on the windowsill next to him. The fearful falcon had flown and was looking at him with its curious little eyes! What joy! Barefoot and in pajamas, he ran to the palace gate. He went outside and found the master falconer chatting with a young peasant who clutched his hat to his chest. The king stared at him.

– Was it you who achieved the miracle, boy?

The peasant turned red as a tomato and answered timidly.

– Fantastic! How did you do it? Do you have powers or something?

“No, Your Majesty, none of that. I just cut the branch and the falcon had no choice but to open its wings and take flight.

The king understood that the fear of the unknown often paralyzes us, makes us cling to what we already have, to what we consider safe, and that prevents us from flying free. Now I saw clearly that, like the fearful hawk, we are all capable of doing more things than we think and that it is a matter of having confidence in ourselves.


The king took a deep breath and thanked the peasant for his important teaching. He gave him a rich reward and invited him to sit with him in the garden, to watch the magnificent flight of his two falcons.