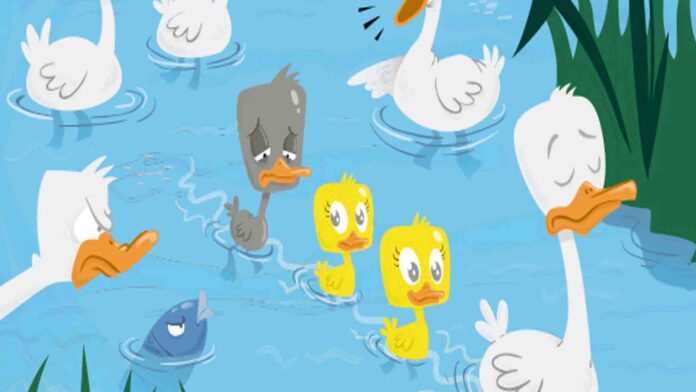 It was a beautiful summer morning at the pond. All the animals that lived there felt happy under the warm sun, especially a duck that from one moment to another, expected her ducklings to come into the world.


– It’s a wonderful day! – The paw thought as it rested on the eggs to warm them – It would be ideal if my children were born today. I can’t wait to see them because they will surely be the most beautiful in the world.

And it seems that her wishes were fulfilled, because in the middle of the afternoon, when the whole field was silent, there were some creaking sounds that woke up the expectant mother.

Yes, the time had come! The shells began to break and very slowly, one by one the heads of the chicks poked out.

– But how precious you are, my children! – exclaimed the proud mother – That’s how cute I had imagined you.

Only one chick was missing to come out. It is seen that he was not so skillful and it was difficult for him to break the shell with his small beak. In the end he, too, managed to stretch out his neck and poke his huge head out of the shell.

– Mommy mommy! – said the strange chick with a squeaky voice.

The paw, when it saw him, was scared! It wasn’t a chubby yellow duckling like the others, but a big, fat, black duck that didn’t look anything like its siblings.

– Mommy?… You can’t be my son! Where did such an ugly thing come from? – he rebuked him – Get out of here, impostor!

And the poor duckling, with his head bowed, walked away from the pond while in the background he heard the laughter of his brothers, making fun of him.


For days, the ugly duckling wandered from one place to another without knowing where to go. All the animals he came across rejected him and no one wanted to be his friend.

One day he came to a farm and found a woman who was sweeping the barn. The duckling thought that he could find shelter there, even for a while.

“Ma’am,” he said in a tremulous voice, “Would it be possible for me to stay here for a few days?” I need food and a roof to live under.

The woman looked at him out of the corner of her eye and accepted, so for a while, the little duck did not lack for anything. To tell the truth, he always had plenty of food at his disposal. Everything seemed to be going smoothly until one day, he heard the woman tell her husband:

– Have you seen how fat that duck has become? It’s already quite big and shiny. I think it’s time for us to eat it!

The duckling was so frightened that he ran through the wooden fence and away from the farm. For fifteen days and fifteen nights he wandered the countryside and ate what little he could find. He no longer knew what to do or where to go. No one loved him and he felt very unhappy.

But one day his luck changed! He came by chance to a crystal clear lagoon and there, gliding on the surface, he saw a family of beautiful swans. Some were white, others black, but all slender and majestic. I had never seen such beautiful animals. A little embarrassed, he raised his voice and said to them:

– Hello! Can I take a dip in your lagoon? I’ve been walking for days and I need to freshen up a bit.

-Of course! Here you are welcome. You are one of us! – Said one who seemed to be the oldest.

– One of yours? I do not understand…

– Yes, one of ours. Do you not know your own appearance? Bend over and look at yourself in the water. Today it is so clean that it looks like a mirror.


And so did the duckling. He leaned over the shore and… He couldn’t believe it! What he saw left him speechless. He was no longer a fat, flat duck, but in the last few days he had transformed into a beautiful black swan with a long neck and beautiful plumage.

His heart leaped for joy! I have never experienced such a magical moment. He understood that he had never been an ugly duckling, but that he had been born a swan and now he looked in all his splendor.

– Join us – his new friends invited him – From now on, we will take care of you and you will be one of our clan.

And happy, very happy, the duck that was a swan, got into the lagoon and shared the ride with those who really loved him.