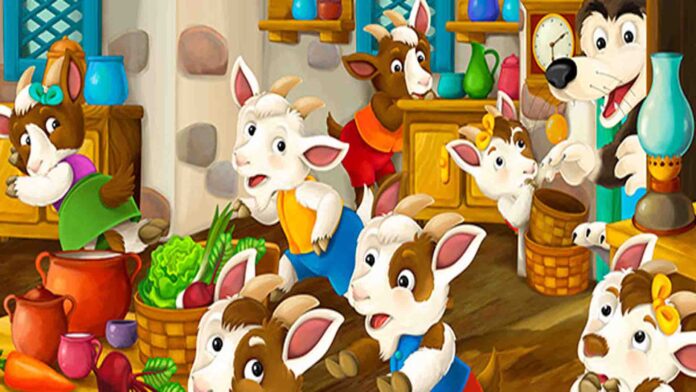 Once upon a time there was a goat that had seven kids. All of them were beautiful, white and with big eyes. They spent the day jumping around and playing with each other in the meadow.


One autumn day, the mother goat told her daughters that she had to go away for a while to go to the forest in search of food.

– Girls, come closer! Listen to me well: I’m going to get food for dinner. While I’m away I don’t want you to leave the house or open the door to anyone. You already know that there is a wolf with a hoarse voice and black paws that is always prowling around here. It is very dangerous!

– Calm down, mommy! – answered the smallest goat on behalf of all – We will be very careful.

The mother said goodbye and after a while, someone knocked on the door.

– Open the door for me. I am your dear mother.

– No! – shouted another – You are not our mother. She has a soft and sweet voice and your voice is hoarse and ugly. You are the wolf… Get out of here!

Indeed, it was the evil wolf that had taken advantage of the mother’s absence to try to deceive the goats and eat them. Furious, he turned around and decided he had to do something to make them trust him. He got the idea to go to a nearby farm and steal a dozen eggs to clear his throat. When she had swallowed them all, she found that she spoke much finer, like a real lady. He went back to the goat house and called again.


“Who’s calling?” heard the wolf on the other side of the door.

– It is I, daughters, your mother! Open up, I really want to hug you.

Yes… That melodious voice could be her mother’s, but the most suspicious of the sisters wanted to make sure.

– We are not sure if it is true. Stick your paw through the crack under the door.

The wolf, who was naive enough, put his paw through the gap between the door and the floor, and at once he heard the ragged cries of the kids.

– You are the wolf! Our mother has white paws and yours is dark and much fatter Liar, get out of here!

They had caught him again! The rage infuriated him, but he was not about to fail. He went to a mill on the other side of the creek and dipped the paws in flour until they were completely coated and the color of snow. He came back and called a third time.

– I’m a mom. Let me pass, my little ones – said the wolf with a singsong voice, because it still kept the fine tone thanks to the effect of the egg yolks.

– Show us the paw under the door! – answered the frightened kids.

The wolf, smiling mischievously, stuck his paw through the crack and…

– Oh yeah! Soft voice and milk white paw This has to be our mom! – Said one goat to the others.

They all started jumping for joy because their mom was finally back. Confident, they turned the key and the wolf entered giving a strong push to the door. The poor little goats tried to hide, but the wolf ate them all except the youngest, who camouflaged himself in the box of the great clock in the dining room.

When mother goat arrived, the wolf had already left. He found the door open and the furniture of the house thrown on the floor. The very wicked had eaten his little goats! With a broken heart, she began to cry and the little goat came out of the watch case, very frightened, and ran to take refuge in her chest. He told her what had happened and how the evil wolf had tricked them. Through tears of bitterness, her mother got up, grabbed a huge mallet that she kept in the kitchen, and set about retrieving her daughters.

– Come on, little girl! This is not going to stay like this! Let’s go in search of your sisters, that rascal can’t go far – he exclaimed emphatically.


Mother and daughter went out to look for the wolf. They found him fast asleep in a cornfield. His belly looked like a huge balloon about to burst. The mother, with all the strength she could, hit him with the mallet on the tail and the animal hit such a big boat that it began to vomit the six kids, who luckily were safe and sound. Howling, he stormed out and disappeared into the darkness of the forest.

“Don’t ever come near our house again!” You heard me? Don’t come back here! – The mother goat yelled at him.

The little goats hugged each other excitedly. The wolf never threatened them again and they understood that they always had to obey their mother and never trust strangers.