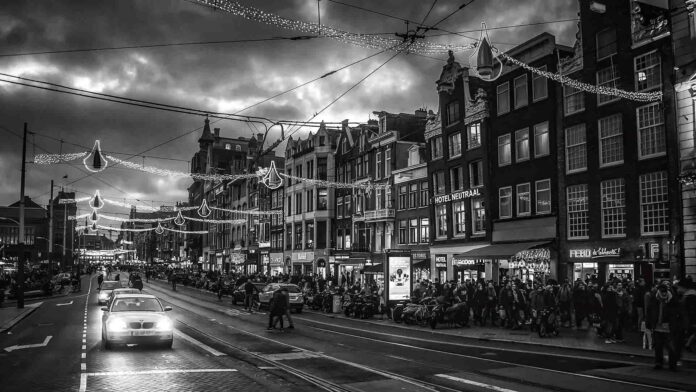 Under the cover of a jacket, a pair of gloves and a scarf that threatened to strangle him, he crossed one of the great avenues that divide, from one end of the city to the other, the good neighborhoods from the undesirable ones. Between two realities and imbalances his steps were directed on the carpet of dust and water, because it had rained, which left a rancid aroma that cleared his nostrils.


Throughout the entire street, from one side to the other, from one balcony to the other balcony and from one lamppost to the next, hundreds of colored lights, climbing papanoeles and ornaments of an almost infinite chromatic variety, subliminally recalled the great party. neo-pagan of the spirit of joy and love.

He did not really know where he was going, nor did he really care, but he decided to leave the house because he could not bear for a single moment the prison and pressure that the four walls of his room exerted on his tormented head, wrapped in discouragement and sadness.

Three days of intense thoughts and a shortage of words and appetite were necessary to assimilate the new look that his life was taking, the new unforeseen situation that now forced a sudden change in strategy with no room for improvisation, but open to big mistakes and failures.

San Sebastián was presented to him once again as that cursed city in which it was impossible for him to be happy. The doors of his hope were suddenly ajar, nevertheless leaving a narrow beam of light through which he could peer attentively for any opportunity presented to him to open it wide again.


He already knew at this still premature stage in his life that it was not going to be easy. However, he felt that he should not lose heart, since that task was perhaps the toughest and most gratifying battle that life could offer him. But the anxiety about not being able to advance forced him to constantly ask himself how much pain that uncertain wait was worth, and he ended up answering that, if necessary, life, since there is no greater dedication than what is believed to be true.

A vaporous stream of cold violently rocked the colorful necklaces of lights that adorned the street and some of the passers-by, laden with gifts and with that typical expression that causes having to buy something that you are not going to enjoy, feared that they would unhook from their ties and they will rush on their heads, full of illusions, projects and that idiotic anesthesia that makes us all feel better people when the end of the year approaches. But the bulbs did not fall and each one continued with their routine.

A traffic light forced him to stop and with his steps his thoughts also ceased. He looked around and saw that everyone was chasing some false promise of happiness, he saw children asking for candy from opportunistic santaclauses , he saw lotteries make their fortune at the expense of unhappy people who rubbed their tickets against the ornate lintels of the administrations and he saw many men and women trying to buy their children’s love with large gift-wrapped packages.


And he thought that if there was a force in the world so powerful as to make all those people move following a non-existent hope, there would also have to be another much greater one that could move hearts after true joys.

And that was how he did not cross the street when the traffic light allowed him, but turned around and walking in the opposite direction to the hypnotized masses sick with superficiality, he arrived at a small station where he bought a one-way ticket and took the first bus to take him five hundred thirty-seven kilometers from his house on that night of the twenty-ninth of December.