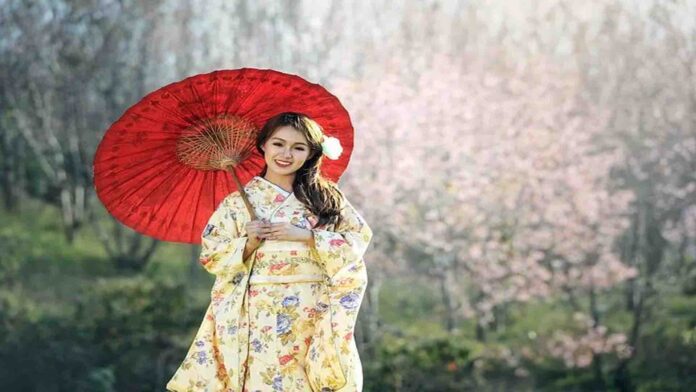 In Japanese love myths, you will find a great variety of surprising stories, but with something religious, mystical and a lot of symbolism ; There is also influence of mythological elements from China that speak about love, terror, princesses, gods, kamis, deities, among others

The Japanese have a culture, which is nourished by their ancestral legends, which are still alive in today’s population; beliefs in their gods have been transformed over the years; their myths have been reduced to ancient symbolism and legends ; but his collection of kami (gods) are exhibited in the pantheons, as a sign of continuing to be “the land where the sun rises”


Their myths are intertwined between gods; beautiful princesses to be rescued; the samurai who fight to the end for their honor; the terrible monsters that try to harm its inhabitants; great mysteries unsolved by man; Its first myth begins with the creation of the world that describes the formation of its eight islands comprising the territory of Japanese civilization.

Some Japanese myths are based on ceremony of their acts that they perform in everyday life; in the same way they give great importance to their ancestral religion; as well as traditional music; the fighting and beautiful japanese gardens. Being the most important in her, the narration of the first emperors in his bloodline of royalty in the years 554 a. C. – 477 a. C. among which can be counted: Emperor Itoku, Emperor Annei, Emperor Suizei and Emperor Jinmu, among others.


The aforementioned, together with the fabulous story, which revolves around Izanagi and Izanami, who, with a mystical spear decorated with minerals and precious stones, which was given to them as a gift by the first gods ; They start the first legend of Japanese mythology of the creation of the world. Where their gods of the sun, moon, wind, stripe, storm, agriculture leave a marked belief surrounded by mystical events.

In Japan there is a great variety of love myths ; with characteristics similar to those of China; their stories tell how a couple in love must make enormous sacrifices to be able to be together for the rest of their lives. Japanese mythology has figures of gods and goddesses that help throughout the path of true love. In this civilization, since the most ancient times, man seeks different types of love; that of your family and how to stay together to protect yourself; the affection to the friends of struggles and battles to find peace; wanting to maintain harmony in nature, among others.

As far as love myths are concerned, there is a famous “Mi-Ai” practice where parents carry out a model of interviews with their daughter’s future girlfriend; it is he who selects the husband of his daughters. Although currently couples in Japan marry for love, this ritual is still practiced in public places, gardens and hotels as a proof of love.

Another ceremony that is performed in love myths is the Samurai tea tradition. But undoubtedly this culture has several myths of love, which are maintained with small modifications over time, these are: The white butterfly, the bamboo, the fisherman and the turtle, the mirror, The red thread of destiny; Sakura flower and the three monkeys that mix with silent love.

In the Japanese nobility, butterflies of different colors are used to explain the connection of their three states: caterpillar, chrysalis and butterfly, with the symbol of life, death and total transformation. Also eternal love and they believe that their deceased fly in the form of colored butterflies according to their trajectory through this life.


To make a small summary of the Japanese love myth of white butterfly; first we have to say that it is an eternal love; where a kind man who never married or had a sexual relationship with any woman after his first love died; He moved to a house behind a very old cemetery to take care of the grave of his beloved. Every day he went out very early to bring them beautiful flowers and clean his grave.

One sick day the old man and his closest relatives went to take care of him; They noticed that a white butterfly was not removed from its bed; a very young nephew tried to remove the butterfly; it flew to a grave full of beautiful flowers and got lost among them; The young man returned to the room to continue caring for the old man. But it was useless this was dead. From that moment on, this love myth of the old man named Takahama, reveal the secret that he kept for many years but that never took away a beautiful smile.

In many towns in Japan, grandparents tell young women the legend of the red thread of destiny; as a way of explaining that you have to wait for the couple that fate has in store for them. They also believe that couples, friends, partners who are destined to meet are united by a red thread; its strands are resistant to time, distances, storms and more, its knots are resistant to fire, water and air; These threads are what drive our destinies.

The Japanese people are the ones who talk the most about the red thread of destiny; they associate it with the Chakras or middle finger; Some associate it with the balance of energies that transmit feelings, passion, and love as a couple. It is important to note that there is more than one legend that is based on the fact that when these threads are tied, no one can break this link; in this myth there is a red thread that joins two people; both remain united by love whatever happens, these happen from birth.

The most relevant of this myth is that when people meet for the first time they connect with the energies of the flame of the heart, uniting the two little fingers, many emperors have tried to cut the red thread of destiny; what causes gigantic tangles in this thread. But in the end the two ends have to come together; from that moment the hearts became one and the passion overflowed throughout the body balancing the energies to find inner peace.


From this history, a variety of Japanese rituals have emerged , which seek to channel the vibratory energies produced by the red threads in the heart; There are also witches who are dedicated to connecting these threads faster and without making mistakes.

In the islands of Japan there are many legends about a woman named Shizuka, who was a strong warrior who managed to escape the Japanese military regime of the time; in his flight he left behind his great love; she had to walk long cumin alone; when he began to get sick he made a cane from a dead tree branch. The woman was already desperate because she couldn’t find her love; their strength was barely able to keep her standing; one day he decided to stick his cane in and lie down on a carpet of leaves and dried flowers; where he died.

Over the years a cherry tree grew; which originally had white flowers. But when mixed with Shizuka’s sadness and the little blood that remained from her love suffering; the petals of the flowers of this tree turn pale pink. It is also said that the cherry tree was enchanted; If you hug it tightly, it can feel the same as in a human heart.

In the Japanese cherry trees forests, thousands of trees are planted waiting to make the eternal love of some warrior blossom, who due to his struggles has put aside a great love for all samurai, and princesses who are married to emperors; but her heart belongs to another man

Japanese myths of the Three Monkeys

Long ago in the western lands; Three monkeys were found, with the following characteristics: one did not see, the other did not hear and the third was deaf; his wisdom was for Japanese mythology a cluster of beliefs; These three figures became so culturally popular that Japan built the Toshogu temple for them.

In each of these monkeys a concept of wisdom prevails; In the case of the non-listener, he continually observed human beings to record their misbehavior, the non-speaker listened attentively to what men say when they are alone, and the blind man was content to listen attentively to what the men speak. others to get an idea with all the details to your colleagues. These animals found the motto of better hearing, seeing and keeping quiet to never get into trouble.