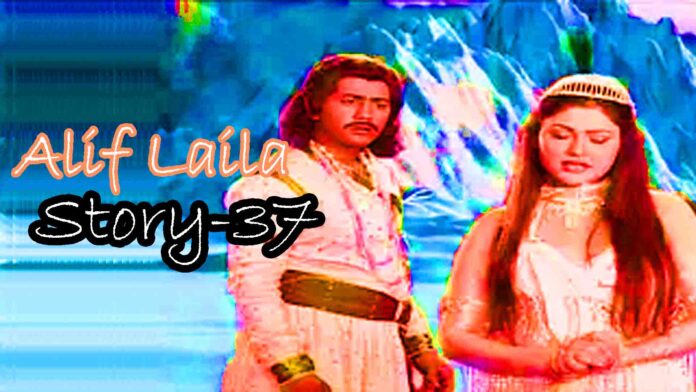 The story of the old man and his deer – Alif Laila

The old man said, ‘O demon king, now pay attention and listen to my story. This deer is my uncle’s daughter and my wife. I married her when she was twelve years old. She was extremely chaste and obeyed my every command. But after 30 years of marriage and no child was born from it, I bought a maidservant because I was very keen on having children. After some time a son was born to the maid. When the child was born, my wife became very jealous of the child and his mother. I am very sorry that I came to know of my wife’s animosity after a long time.


‘By chance I had to go to another country. I insisted to my wife to take good care of the two of them behind me and take care of their comfort and discomfort. If God wills, I will come back in a year.

‘My wife started enmity with both of them after I left. She also started learning magic. After I left, the evil one made my child a calf with his magic and handed it over to my servant, the cowherd, to take it to his house and feed it and make it fat. Similarly, he made my maidservant a cow with the help of magic and sent her to the cowherd’s house.

‘Coming back from abroad, I asked my wife about my son and his mother. He said that your maid has died and I have not seen your son for two months, I do not know where he has gone. I felt very sorry for the death of my maidservant, but sat patiently. But I hoped that someday I would meet my son.

After eight months the festival of Eid came. I wanted to sacrifice some animal on this festival. I called my cowherd and asked him to bring a healthy cow for sacrifice. By chance he brought my maidservant who had become a cow by the force of magic. When I tied her feet to sacrifice her, she burped in a very compassionate voice and tears started flowing from her eyes. Seeing his condition, I felt pity on him and I could not put a knife on his neck. I told the cowherd to take it and get another cow for sacrifice. Hearing this, my wife became very angry and started saying that this cow will be sacrificed, the cowherd has no other cow than this.


‘By doing good or bad to him, I again took the knife in my hand and got ready to kill the cow. At this the cow started screaming even more. I was in a strange dilemma. In the end I gave the knife to the cowherd and said, I do not have a knife on this cow, you should sacrifice it. The cowherd did not take pity on the crying of the cow and he turned away the knife.

When the cow’s skin was taken off, everyone saw that there was only a skeleton inside it, the meat was not known anywhere. The reason was that the stubbornness of the cow was only due to illusion. I was angry at the cowherd that why the cow was kept in such a condition that it became so thin. I gave the cow to the cowherd and said, you bring it for your own use, bring me a calf to sacrifice, but it should be fat and fresh, not like this cow.

The cowherd soon brought a fat-fresh calf. The calf was also very beautiful to see. Although I did not know about that calf that it was my son, but seeing him, love started pouring in my heart and that calf also broke the rope on seeing me and fell at my feet. This made the source of love in my heart boil more and I started thinking how to kill such a lovely calf. These feelings made me very upset. Tears started flowing from the eyes of that calf. This increased my love for him and I asked the cowherd to take this calf back and get another calf in its place.

On this my wife said that why don’t you sacrifice such a fat calf. I said that this calf is very dear to me and I do not want to kill it, you do not force anything for it. But the ruthless rascal continued to wrestle and malice insist on killing him. Tired of his argument, I took a knife and went to cut my son’s neck. He shed tears looking at me again. Such kindness and love arose in my heart that the knife fell from my hand.


‘Then I told my wife that I have another calf, I will sacrifice it. That wicked desire still insisted on killing the same calf. But this time I did not care about his quivering and returned the calf. Yes, to console the wife’s heart, she said that I will sacrifice this calf on the day of Bakrid.

The cowherd took the calf to his house. But the next morning he told me in private that I want to say something to you and I hope that you will be happy to hear me. My daughter is proficient in magic. Yesterday, when I took that calf back, she laughed and cried after seeing it. When I asked the reason for this strange thing, I said that Abba, the calf that you brought back alive is the son of our master, so I was glad to see it alive. cried because before that her mother had been sacrificed. Our master’s wife had made these mother and son a cow and a calf with the help of magic because of jealous envy. I told you what I heard from my daughter’s mouth.

‘O demon king, now you imagine how much grief and anguish must have arisen in my heart after hearing this story. I kept silent for a while and then went with the cowherd to his house to hear this account from his daughter’s mouth. First of all I went to his cattle shed to see my son who had become a calf. Before I could touch him, he came to me and started pampering me so much that I was convinced that he was my son.

‘I went to the girl and heard again the condition heard from the cowherd’s mouth and said to the girl that can you give this calf the form of a human again. She said, Surely I can make him a man again. I said, if you do this, I will give you all my wealth. The girl smiled and said that we are your servants, you are our master, your orders are obligatory; But I will give the calf in human form on two conditions – one is that when it becomes a human, you should marry it with me and secondly that the one who has made it animal from man should also be punished a little.


‘ I replied, I completely agree with your first condition, I will marry you with him and give so much wealth to both of you that you will not lack anything for the rest of your life. In the second condition, I leave the decision in your hands, whatever punishment you think is appropriate for her, the same punishment will be given to my wife, yes I will definitely say that although she is wicked punishable but do not give her the death penalty.

‘ The girl said that I will do to him as he has done to your son. Having said this, he took water in a cup and after inviting it, brought the calf in front and said that O God’s servant, if you are a man and have become a calf only due to magic, then by the mercy of God, get your former form. Saying this he sprinkled the anointed water on him and he immediately took the form of a human. I affectionately hugged her and told her in a furious voice that it is because of this girl that you have got human body again, pay your favor and marry her. The son gladly obeyed me. In the same way, the girl enchanted the water and gave the form of a deer to my wife.

‘My son married the girl but unfortunately she died after a short time. My son was so sad that he left the country and went somewhere. I didn’t get any news about him for a long time. So I set out to find him. I did not trust anyone enough to leave my deer-made wife with him, so I take her with me to country and country in search of my son. This is the story of me and this deer. Now decide for yourself whether this incident is strange or not.’ The demon said, ‘No doubt it is strange. I forgave one-third of the merchant’s crime.’

Then Shaharjad requested Shahryar that when the first old man had told his story, the second old man, who had taken two black dogs with him, told the demon that I also keep my history and the history of these two dogs in front of you. If it is better than the first story, I hope that after listening to it, one third of the merchant’s crime will be forgiven. The monster said that if your story is more strange than the first story, then I will definitely listen to you.