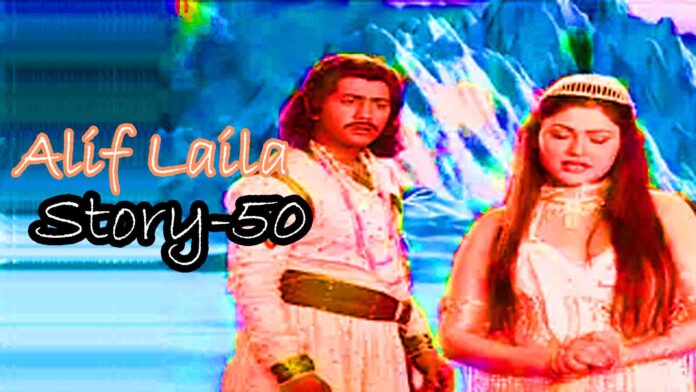 On the second night, Malika Shehrzad began narrating this story at the behest of her sister, Duniyazad. In the old days, there was a tailor in Kashgar, a nearby town of Tatar country, who used to sit in his shop and sew clothes. One day he was working in his shop that a hunchback came with a daaf (big dagger-like instrument) and started singing while sitting under his shop. The tailor was very happy to hear his song. He said to the hunchback, if you don’t mind, my house is just a short distance from here, go there and sing and play comfortably. Hunchback agreed and accompanied the tailor to his house.


On reaching home, the tailor washed his hands and face and said to the beautiful wife, whom he loved very much, that I have brought this man so that you can hear his beautiful singing. He also said that it will eat food with me. The wife prepared and served delicious food in a short time. Then both of them started eating and took the hunchback also with them. The tailor’s wife had prepared fish and made it very tasty. The humpback ate a big piece of fish without taking out the hook out of greed. A big thorn in the piece pierced his throat so much that he began to groan in pain. Within no time his breathing stopped. The tailor and his wife tried a lot to get the thorn out of his throat but none of the remedies were successful. The tailor was very worried that if the Kotwal comes to know, then I will be caught on the charge of murder.

So he picked up the hunchback in an unconscious state and took it to the door of a Jew. Putting him down, the tailor clapped on the door, then Hakim’s maid opened the door. The tailor gave him five mudras and asked him to ask his master to come soon and treat my friend. The maid went to the upper floor to inform her master and when the tailor saw the hump again, he understood that he was dead. He picked it up and made him stand by the door of Hakim. After that he slipped away silently.


Hakeem came downstairs after hearing the whole situation from the maid, realizing that the man who gave five coins for the first time would surely be rich and would spend a lot of money in the treatment. He also had a lamp in his hand. As soon as he opened the door, the hump fell down the stairs and fell into the street. Hakim wondered what had fallen. When I saw in the light of the lamp, I was very frightened considering the hunchback to be dead and started thinking that this man was lying dead at my door. If the emperor comes to know, then I will be in big trouble.

So the Hakim, after picking up the hump and bringing it into the house, tied it in a rope and secretly threw it inside the house of a Muslim living in the backyard. He was a businessman selling goods in the Muslim royal kitchen, there was a lot of grain, ghee etc. in his house. Rats used to eat a lot of that merchant’s goods and he would suffer loss. In the middle of the night, the merchant came to look at his commodity, seeing the hunchback, he understood that he is a thief, he steals my things and I understand that rats have done harm. He brought a stick and hit the hunchback on the head. As soon as a stick fell, the hump rolled on the ground. When the merchant went near and looked closely, he came to know that he was dead.


Now the merchant was very upset. He started saying in his mind that I felt the sin of killing a man in vain, what was the harm if a little commodity was lost, and now I will be given death sentence for the crime of killing the thief. Thinking of this he fainted. After regaining consciousness, he started thinking of ways to protect himself. Then he picked up the body of the humpback and took it to the market in the dark, made it stand by the door of a shop and went to sleep in his house.

In no time a Christian came out from there. This Christian had come out of a prostitute’s house and used to keep swinging intoxicated. In the same condition, his body collided with the body of the hunchback and the hump fell down. Christian understood that it was a thief who was standing here with the intention of robbing me. He started beating her with punches and at the same time shouted in a loud voice, ‘Thief, thief.’ Nearby the soldiers were patrolling, they came running after hearing the call of ‘thief, thief’ and saw a Muslim lying down and a Christian killing him.


The soldiers asked Christian why are you beating it. He said that this is a thief, he was standing here quietly so that he could rob me by pressing my neck in the dark. The soldiers pulled him apart and picked up the hunchback holding hands and saw that he was dead. Now the soldiers caught Christian and presented him in front of the Kotwal along with the body of the hunchback. He also presented the soldiers of patrol along with Christian and Hunchback in the morning in front of the Qazi and told the situation of the night.

Therefore, a hanging ticket was set up at a big crossroads and a decree was made in the whole city that a Christian would be hanged for the crime of killing a hunchbacked Muslim, whoever wants to see it should come and see. After a while a crowd gathered at the crossroads. Christian was brought tied up and the body of the hunchback was also placed there so that people could see who had been murdered.


The executioner was about to put the noose around Christian’s neck when the merchant who delivered the royal supplies came out of the crowd and said in a loud voice, ‘This killer is not a Christian, I am. I have already committed one murder, why should I increase my sin by hanging an innocent.’ Saying this he narrated the whole thing in front of the Qazi. The Qazi ordered that Christian be taken off the ticket and the merchant be hanged.

The executioner was about to pull him by putting a noose in the merchant’s neck when the Jew Hakim came out from the crowd shouting and said that I should not be hanged to this merchant. I opened my door with a jerk, due to which it fell and died. Now the Qazi said that leave the merchant also and hang the Jew in his place.

The executioner was about to pull the noose around the neck of the Jew when the tailor came shouting that the hakim was not to blame, I had kept the hunchbacked body at the hakim’s door. On asking the Qazi, he said, ‘This man was having dinner with me at my house last night. While eating the fish, the hook got stuck in its neck and its condition worsened, so I took it and went to the Hakim. Hakim’s arrival was late. In such a long time I saw it and found it dead. Out of fear, I ran away by standing its dead body by the support of Hakim’s door. The Qazi said that when the murder has happened, someone or the other has to be hanged, hang this tailor.


But the execution could not be done because the special soldiers of the emperor came and stopped the execution and asked everyone to walk in front of the emperor. What happened was that the hunchback was the king’s clown and used to entertain him. When he did not reach the court that day, he asked why the hunchback did not come. His servants told, ‘Yesterday evening he had gone out after drinking alcohol. Today we saw his dead body at that crossroads and there the Qazi asked a Christian to be hanged for the crime of killing him. Another person took this crime to his own head. Another person asked to be hanged instead. Finally a tailor took this crime on his head and now the tailor is about to be hanged.’

The emperor called the four accused before him. In his understanding, no one should have been hanged, but he took the statements of all of them and by ordering them to write this statement in the history book, he said to these people, ‘You people’s story is very strange. If you tell each and every story more interesting than this, then you will be given life, otherwise you will be given the death penalty. First of all Christian said that I come across a very strange story, if allowed, let me tell it. The emperor gave permission and he started reciting.