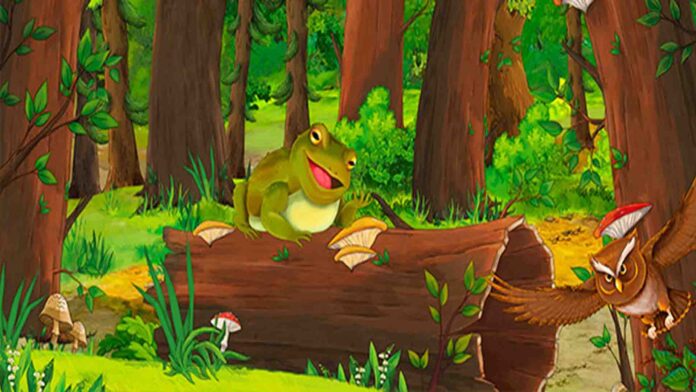 The legend of the toad Kuartam a horror stories for kids

An old story tells that many years ago, in the depths of the Ecuadorian jungle, a toad lived different from the other toads in the world because it had a peculiarity: if someone bothered or made fun of it, it would turn into a tiger and attack mercilessly.


Only some old people claimed to have seen it when they were children, so for most of the indigenous people of the towns near the Amazon, the strange animal was like a being of legend that was hidden in the jungle. Of course, they knew it existed because sometimes, sheltered at night, he sang loudly from his hiding place:

As ‘Kuartam – tan’ was what he repeated incessantly, with the name of toad Kuartam stayed.

They say that a young man from the Shuar tribe named Nantu wanted to go hunting one night. Before leaving home, his wife warned him:

– Be very careful out there, and please, if you see the toad Kuartam don’t even think about making fun of him. You know how bad it is for these places!


– Bah, nonsense! I’m sure that this thing about turning into a tiger is pure invention, but stay calm! I promise you that if I meet him, I won’t tell him anything and pass by.

Nantu said this while showing a mischievous smile that his wife did not like too much.

– Nantu, I insist on telling you not to be irresponsible.

The boy winked and gave her a loud kiss on the cheek.

– Trust me! And now I’m leaving, it’s getting late … I’ll be back before midnight!

Under the moonlight, the young man wandered through the tropical jungle, pushing aside the lush vegetation with a sharp machete and looking closely for possible prey. Unfortunately he saw nothing but a snake and two or three tiny mice scampering from one place to another.

– There is no bug here that can serve me as food … What a waste of time!

After a while he came to a clearing and lay down on the ground to rest. His muscles ached, but mostly he was bored of going round and round with no results.

– As soon as I get home empty-handed, tomorrow’s menu will be fruit for breakfast, fruit for lunch, and fruit for dinner. I’m going to end up hating coconuts and bananas!


Suddenly, he stopped lamenting because a hilarious idea crossed his mind.

– ‘What if I make fun of the famous toad a little bit? … I’m going to try and see what happens!’

Without any shame he began to call Kuartam. He was convinced that, although the toad sang strangely, it had no powers of any kind and therefore there was nothing to fear.

He only heard the fluttering of a family of little birds, so he kept going err que erre.

As there was no toad or the like there, Nantu became more emboldened and his voice became more joker:

– Yujuuuuu!… Toad Kuartam, are you around?… Is it true that you are a magic toad?… If I don’t see it, I don’t think so!… Don’t be a coward and show your face!

There was no answer, but Kuartam was there, crouched in the top of a tree. Of course he had heard it all, and there came a time when he felt so upset, so angry, that his patience ran out and what had to happen happened: his body, small as an orange, began to grow enormously and transformed into that of a tiger.

Nantu, oblivious to everything, kept calling the batrachian without ceasing to mock him.

Kuartam, once a simple frog and now a huge felid, could not take it anymore and emitted a roar that made the clouds tremble. Then he leaped from on high, opened his jaws wide, and swallowed the foolish hunter in one bite.

While all this was happening, Nantu’s wife waited at home feeling that the night was passing very slowly. For hours she waited by the door for her husband to return, but when she saw that he did not return, she became very nervous.

– ‘It is very strange that Nantu has not returned yet! … What happened to him? … He knows the jungle like the back of his hand and is the most agile of the tribe … The only possible explanation is that … that … he has found with the toad Kuartam! ‘.

Without stopping to think, he ran out of the cabin. Luckily it hadn’t rained and he was able to trace the footprints that Nantu had left behind.

Everything went well until he came to a clearing in the jungle; In this place, for some reason that he could not understand, the footsteps disappeared completely, as if Nantu had been swallowed up by the earth.

The girl felt very sad and began to say aloud:

At that moment, he heard a kind of snort that came from above. He looked up and, on a thick branch, saw a gigantic toad, sleeping on its belly and so swollen that it seemed about to explode.

– ‘That phenomenon of nature must be Kuartam. I bet she gobbled up my husband and that’s why he’s so fat! ‘

It was indeed Kuartam, who after devouring Nantu had turned back into a toad while maintaining colossal dimensions.

The girl, in an act of real bravery, took the ax from her waist and began to cut down the log. The toad, who must have been half deaf, did not even know of his presence and continued snoring as if it were not the thing with him.

After much effort, the tree collapsed and Kuartam fell backward to the ground. The smack was so impressive that it instinctively opened its mouth and Nantu the hunter shot out like a cannonball.

But that was not all! When the imposing toad was empty it began to deflate, and in the blink of an eye, it recovered its small body as always. After the conversion he felt very painful, but fearing that they would retaliate against him, he drew strength from weakness and with a few leaps he disappeared into the green foliage.

Nantu, fortunately, was still alive and well. His wife had barely saved him and he couldn’t stop hugging her.


– If I’m still here it’s thanks to you, to your courage. I am ashamed for my behavior and for not keeping the promise I made to you when I left home. I beg you to forgive me!

The girl realized that Nantu was being sincere and was truly sorry, but even so she raised her index finger and said very seriously:

– Respect for others, be they people or animals, is above all things. I hope you’ve learned your lesson and never make fun of anyone again!

It’s fair to say that Nantu kept his word and was kind to everyone for the rest of his life, but he had to bear the pain of not being able to apologize to the toad Kuartam because their paths never crossed again.