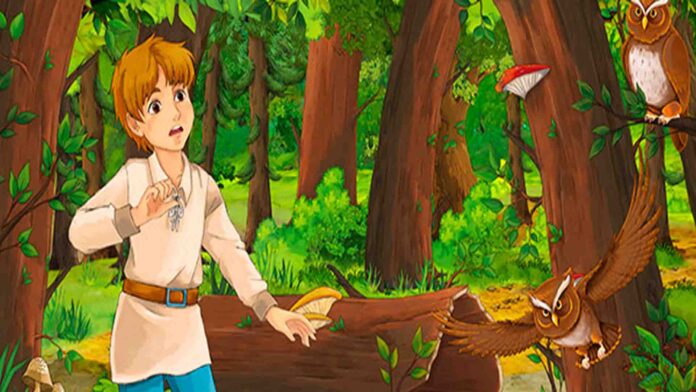 Juan without fear a horror stories for kids

Once upon a time there was a man who had two totally different sons. Pedro, the oldest, was a smart and responsible boy, but very fearful. On the other hand, his little brother, Juan, was never afraid of anything, so everyone in the region called him Juan without fear.

Juan was not afraid of storms, or strange noises, or hearing tales of monsters in bed. Fear did not exist for him. As he got older, he became more and more curious about what it was like to feel fear because he had never had that feeling.

One day he told his family that he was going away for a while to see if he could discover what fear was. His parents tried to stop him, but it was impossible. Juan was very stubborn and was determined to embark on an adventure.


He packed some food and some clothes into a backpack and started walking. For days he toured different places, ate what he could and slept in the open, but there was nothing that caused him fear.

One morning he arrived at the capital of the kingdom and wandered through its streets until he reached the main square, where hung a huge sign signed by the king that read:

“It is made known that the brave knight who is able to spend three days and three nights in the enchanted castle, will be granted the hand of my daughter, Princess Esmeralda”

Juan without fear thought it was an ideal opportunity for him. Without thinking twice, he went to the royal palace and asked to be received by the king himself. When he was in front of him, he said:

– Sir, if you agree, I am determined to spend three days in that castle. I am not afraid of anything.

– You are certainly brave, youngster. But I warn you that many have tried and so far, none have succeeded – exclaimed the monarch.

Juan without fear, escorted by the king’s soldiers, went to the gloomy castle that was at the top of a steep mountain. Nobody had inhabited it for years and it looked really gloomy.


When he entered, everything was dirty and dark. He went to one of the rooms and with some planks that were there, he lit a fire to warm himself. Right away, he fell asleep.

After a while, he was awakened by the sound of chains. There was a ghost in the castle!

“How dare you wake me up?” Juan yelled, facing him. He picked up a pair of scissors and began to tear the sheet of the specter, which fled through the fireplace until it disappeared into the darkness of night.

The next day, the king stopped by the castle to check that Juan was fearlessly well. To his surprise, he had made it through the first night locked up and was determined to stay and face the second day. After a few hours touring the castle, darkness came and finally, time to sleep. As the day before, Juan fearlessly lit a fire to be warm and in a few seconds he began to snore.

Suddenly, a strange owl-like hiss woke him up. He opened his eyes to see an ugly old witch spinning around and around at top speed on a broomstick. Far from being cowed, Juan fearlessly confronted her.

– What do you want, witch? Do you want to throw me out of here? Well, you won’t! – he bellowed. He jumped up, grabbed the broomstick, and began to shake it so hard that the witch was thrown out the window.

When dawn came, the king stopped by again to check that everything was in order. Juan was found fearlessly taking a bowl of milk and a piece of stale bread relaxed in front of the window.

– You are a brave and determined young man. Today will be the third night. We’ll see if you can handle it.

– Don’t worry, Your Majesty. You already know that I’m not afraid of anything!

After another day in the castle that was quite boring for Juan without fear, night came. As usual, he built a fire to warm himself and lay down to rest. It wasn’t long before a blast of hot air woke him up. He opened his eyes and in front of him he saw a fearsome dragon blazing out of its huge mouth. Juan fearlessly got up and threw a chair at his head. The dragon howled pitifully and ran the way it had come.

– How heavy these creatures of the night! – Juan thought without fear- They don’t let me sleep in peace, so tired I am.

After the three days and his three nights, the king went to check that Juan was still safe and sound in the castle. When she saw him so calm and without a single scratch, she invited him to her palace and introduced her to her precious daughter. Esmeralda, when she saw him, praised his bravery and agreed to marry him. Juan was happy, although deep down he was a bit disappointed.

– Your Majesty, I appreciate the opportunity you have given me and I know that I will be very happy with your daughter, but I have not been able to feel even a bit of fear.

A week later, Juan and Esmeralda got married. The princess knew that her husband still wanted to become afraid, so one morning, while he was sleeping, he poured a jug of ice water on his head. Juan screamed and got a huge scare.

– You finally know fear, dear! – She said laughing out loud.

– Yes – said poor Juan, still trembling- I really got scared! At last I have felt the fear! Hahaha! But don’t say anything to anyone…. It will be our secret!

Princess Esmeralda never told it, so the brave boy continued to be known throughout the kingdom as John without fear.