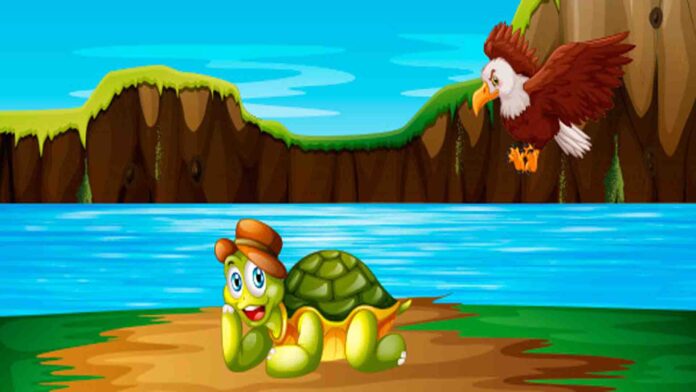 Adaptation of the fable of Samaniego

Once upon a time there was a tortoise that lived very close to where an eagle had its nest. Every morning he watched the queen of birds and was dying of envy to see her fly.


– How lucky is the eagle! While I travel by land and it takes hours to get anywhere, she can go from one place to another in a matter of seconds. How I wish I had her magnificent wings!

The eagle, from above, realized that a tortoise was always following it with its eyes, so one day it landed next to it.

– Hello, turtle friend! Every day you are amazed contemplating what I do. Can you explain to me what is the reason for so much interest?

– Sorry, I hope I didn’t seem indiscreet… It’s just that I love to see you fly. Oh, I wish I were like you!

The eagle looked at her sweetly and tried to cheer her up.

– If you say so… You see, it is not that I am complaining about my shell but it cannot be compared to flying! It must be amazing to contemplate the landscape from the sky, climb up to the clouds, feel the fresh air on your face and hear from near the sound of the wind just before the storms!

The tortoise had his eyes closed while imagining all those pleasures, but suddenly he opened them and a huge smile appeared on his face. He already knew how to fulfill his great dream!

– Listen, eagle friend, I have an idea! How about you teach me how to fly?

The eagle couldn’t believe what he was hearing.


– Of course not! I’m completely serious! You are the most respected bird in the sky and there is no flight more stylish and elegant than yours. Without a doubt, you are the perfect teacher for me!

The eagle did nothing but shake his head as he listened to the ravings of the tortoise. He thought he was completely crazy!

– Let’s see, friend, stop fooling around… How am I going to teach you to fly? You can never get it! Don’t you understand?… Nature hasn’t given you two wings and you have to accept it!

The stubborn tortoise became so sad that tears flowed from his eyes as round as lentils, attesting that his suffering was real.

With a broken voice of sorrow, she continued begging the eagle to help her.

– Please do it for me! I don’t want to leave this world without trying. I don’t have wings but I’m sure I can at least glide like a paper plane. Please, please!

The eagle could do nothing more to convince her. He knew that the tortoise was foolish but he asked so hard that in the end, he gave in.


– Okay, don’t insist any more, you’re going to drive me crazy! I’ll help you up but you’ll be the only one responsible for what happens to you. Is that clear to you?

– Very clear! Thank you, thank you, my friend!

The eagle opened its great, powerful talons and hooked her by the shell. As soon as it took flight, the tortoise went crazy with happiness.

The eagle soared higher, far above the treetops and leaving behind the mountain peaks.

The turtle was enjoying himself like never before! When he was high enough, he shouted:

– You can let me go now! I want to glide across the breeze!

The eagle did not want to know anything but obeyed.

– There you! May luck be with you!

He opened his claws and, as expected, the turtle fell unstoppable at full speed to the ground. The smack was enormous!

The eagle swooped down and saw the sorry state in which her friend had been left. The shell was full of cracks, all four of its legs were broken, and its face was no longer green, but purple. He had miraculously survived but it would take months to recover from his injuries.

The eagle incorporated her and became very serious with her.

– I tried to warn you of the danger and you ignored me, so here is the result of your stupid idea!

– Oh, oh, you’re right, my friend! I got carried away by the absurd illusion that turtles could also fly and I was wrong. I’m sorry I didn’t listen to you.

That was how the turtle understood that it was a turtle and not a bird, and that like all living beings, it had its own limitations. At least the blow served as a lesson and, from that day on, he learned to listen to the good advice of his friends every time he thought of committing some new madness.

Moral: The tortoise disregarded his prudent friend’s warning and the consequences were disastrous. This fable teaches us that in life, before acting, we must value the advice of good and sensible people who love us.