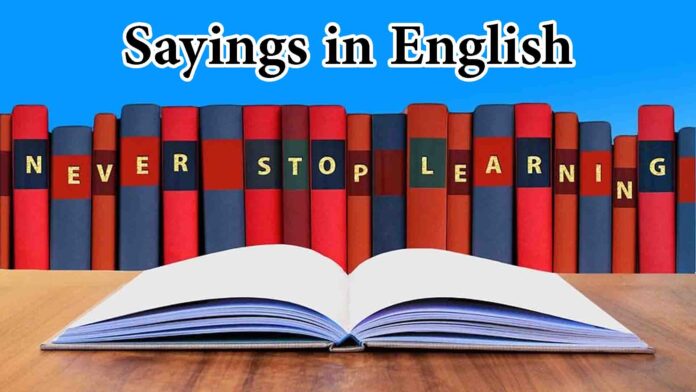 Popular wisdom does not distinguish languages ​​or cultures. All human beings have gone through situations that leave us with some lesson, regardless of the geographical location where we are or the language we speak. This is why, as in Spanish, there are many sayings in English that serve to give a moral about a particular fact, or serve to remind us of some important truth or to reflect on how we behave. The only thing that changes from a proverb in English to one in Spanish, or another language, is the context in which it is developed, because although proverbs lose neither their essence nor their purpose, the way in which it is delivered changes.

The cultural exchange to which we have been subjected for centuries is reflected in many cultural manifestations. Sayings do not escape this phenomenon. Believe it or not, many of the proverbs that we adopt into Spanish come from English; they may not be literal translations, but some do make clear references to their origin.

Many proverbs originated in Anglo-Saxon, Germanic, and French culture during the medieval era. Through all the war conflicts, the invasions, and later migrations, the cultural exchange between European countries allowed the whole baggage of traditions to become very rich and varied. This is how many proverbs were moving throughout Europe, finding adaptations in each region where they arrived, or their own way of being expressed through the local language.

That is why many sayings that are believed to be associated with a specific region find their analog in another completely different region of Europe, and in their respective language. The flow of populations made their beliefs and ways of facing life move along with them. A proverb in English can have its meaning in Spanish and even French, without becoming a literal translation, since it derives from this popular exchange.

One of the characteristics that defines proverbs in English is that when they are translated textually, they use literary figures (similes, metaphors, etc…) that when translated into Spanish do not make any sense, seem incoherent or simply do not have a translation. This is due, more than to the content of the proverb, to the language itself, since Spanish and English come from two different roots, Latin and German.

Therefore, if the literal translation of many expressions is done, the Latin ear finds it challenging to understandwhat the proverb is about. In addition, in the English language, there are many words that are used with a different meaning than what they really have, and it is only done by idioms that have been entrenched for years. A clear example of this, and very common in translation errors, is the word “bizarro”, whose meaning in Spanish is “brave” while in English, its equivalent “bizarre” is used to refer to something strange, or rare. . In this way, many proverbs in English can even seem funny, because when we understand them as they are written, that is, we make their literal translation, we find words that can be very strange to our ears and that do not make any sense.

North American culture is characterized by respect and veneration for characters, items or expressions that become popular through the media. Sayings do not escape popular culture or American pop culture, as there have been many phrases coined over the years that come from this phenomenon.


We can locate the birth of this movement during the 40s and 50s of the twentieth century. After the Second World War, while Europe was recovering, the United States had an economic, business and cultural boom, which ended up encompassing the rest of the world. The advertising agencies put all their efforts into attracting clients and capturing the attention of the public, giving rise to campaigns that ended up penetrating the collective. In this way, many phrases and sayings in English became popular.

Most of the modern sayings used today by Americans or Anglo-Saxon countries in general, come from the importance of pop culture in our society. The phenomenon is also observed in Latin American countries, which, being more exposed to North American influence, adapted this way of expressing their own cultures. This is how proverbs and popular sayings in Latin America come from the influence of the media.