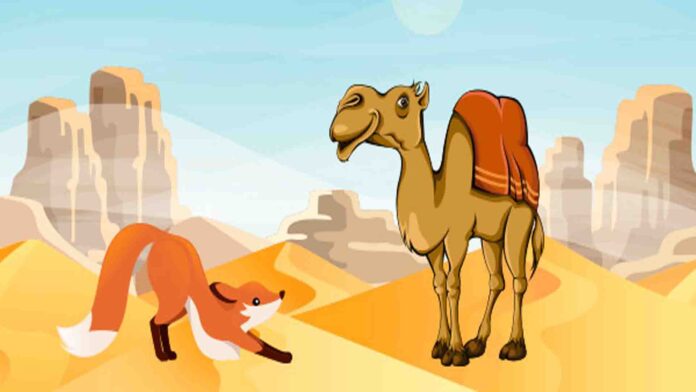 Adaptation of the Sudanese folk tale

This little story tells what happened one day in an African country called Sudan.


It seems that a long time ago there lived a little fox named Awan. Awan, like all of his kind, was agile, intelligent and quick-witted, but he had a very peculiar hobby that set him apart from the others: he loved to eat lizards!

It had its burrow on the right bank of the river and had caught so many during its life that there was no longer one left to put in its mouth. On the other hand, on the left bank, there were still many because in that area there were no lizard-hunting foxes as expert as he was.

One day he sat looking straight ahead and began to sigh.

– Oh, how I wish I could cross to the other side of the river! I would get purple from lizards!… What a pity not knowing how to swim!

He was entangled in these thoughts when he saw his good friend the camel Zorol pass by. Suddenly, he had a great idea.

– Hello Awan! All without news. Well, a little boring today, because I can’t think of anything fun to do and the day is getting too long.


– Well, I have a great plan! I have been told that on the other side of the river there is a very large field of barley. If you take me I’ll show you where it is and you can eat all you want.

– Great, I love barley! Hold on to my humps we’re leaving!

The clever fox climbed on top of him and together they crossed the river. Upon reaching the other shore, he gave some directions to his friend Zorol.

“I think the barley field is over there, by a white house behind those bushes. I understand that the owners are peasants with a rather bad temper, but don’t worry! You can eat to taste that it is siesta time and they are not going to find out.

Zorol left confident and without wasting a minute. Awan, meanwhile, was hunting lizards like crazy because there were so many!

He gobbled down so many that after a while he felt like his gut was going to burst.

– I’m done! If I eat more I will get sick! I’m going to look for my friend Zorol!


The little fox ran through the bushes and went to where the camel was, but instead of being careful, it appeared in the barley field screaming like a madman and making a tremendous ruckus.

The owners of the field woke up from their siesta and in less than a rooster sings they left the house armed with sticks. As expected, they caught good old Zorol red-handed, that is, gorging himself on barley; Before the poor man could react, they beat him up and left him lying on the ground like a rag.

– You deserve it, camel thief! We don’t want to see you anymore on our land!

Awan, who had managed to hide in a hole in time, watched everything from his hiding place. When the humans were gone and the danger passed, he crept up to Zorol and whispered:

– Hey, Zorol, friend, we must cross the river again and return home!

The camel ached in every bone and frothed at the corner of its mouth. With great difficulty, he said to the fox:

– Why did you start screaming? Because of you they found me out and look what they did to me! You are a fool!

Awan, showing that he did not have half a brain, answered the first thing that came to his mind:


Zorol couldn’t believe what he was hearing! His friend Awan was unconscious and selfish. He had started screaming like crazy knowing that he was putting him in danger and on top of that he wasn’t even capable of asking for forgiveness!… He deserved a good lesson!

Even though he was in pain and angry, he got up and calmly replied:

The unfortunate camel had a hard time walking but managed to reach the river without help. As if nothing had happened, Awan happily climbed on top of him thinking that his plan had gone perfectly. Not every day one could have a succulent feast of lizards!

Instead, in Zorol’s mind there was only one idea: that Awan realize what he had done and pay for it. The idiot was going to find out!

He walked slowly with the fox on his back, but when he reached the middle of the river, he began to dance frantically, bouncing and hitting the ground as if he were practicing tap dancing.

Awan, horrified, clung as best he could to his friend’s humps, but keeping his balance was impossible. Scared to death because he couldn’t swim, he shouted:

– What are you doing? Why do you move so much? I’m about to fall and I can’t swim!

Zorol, without blinking, answered in an indifferent voice:

Awan couldn’t resist anymore and fell on his back. Zorol didn’t even turn his head to see how the current was taking him and he finished crossing the river without any kind of remorse.

The fox was dragged by the water for several kilometers until it finally ended up in a less flowing area full of rocks. He ended up disgusted, full of bumps, and injured from head to toe, but at least he was able to save his life.

The elders of the place say that it took him hours to return home, but that as soon as he arrived, the first thing he did was go to apologize to his friend the camel. Zorol, who had a good heart, forgave him and they were in peace.

Thanks to what happened, Awan learned to have empathy, that is, he learned to put himself in the place of others, and he realized that we cannot do to anyone what we would not like them to do to us.