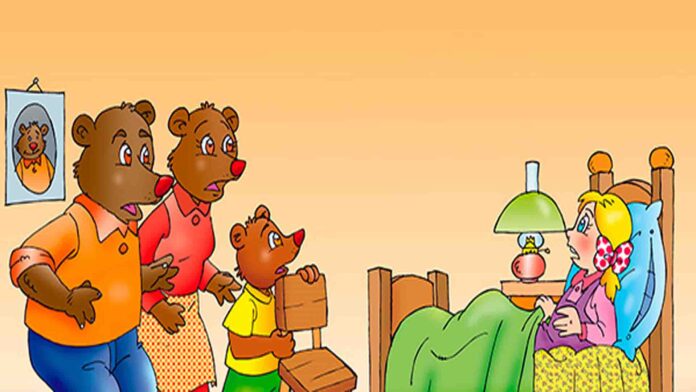 Goldilocks was a good and nice girl but too curious. She was always looking and rummaging through other people’s things! Her mother sometimes got angry with her.


– My daughter, what you are doing is not good at all. Would you like me to take your toys from the closet or put on your clothes?

But the girl couldn’t help it. She liked to look at everything so much, even if it wasn’t hers!…

One spring day, walking through the woods, he walked away from where he lived along a path that was not the usual one. When he least expected it, he found himself in front of a beautiful little house with blue walls and windows adorned with red geraniums. It was so cute that it looked like a doll’s house.

Curiosity got the better of him. He had to go in to see what it was like! There was no one around and the door was open, so without thinking twice, he carefully pushed it open and began to walk around the room.


Goldilocks was struck by the fact that the table was set. On the delicate lace tablecloth were three mugs of milk. As she was hungry, she decided to drink the milk from the largest cup, but it was very hot. He tried the medium but geez… it was too cold. The milk in the smaller cup, on the other hand, was lukewarm just the way she liked it and she drank it in a few gulps.

– Uhmmm, how rich! – thought Goldilocks licking his lips, while his big eyes were fixed on three blue chairs but of different sizes – And whose chairs are they?… I’m going to sit down and see if they’re comfortable.

Determined, she tried to get on the highest chair but was unable. He tried the medium one, but it was too hard. With a small impulse he sat down on the little one.

– Cool! This one is really comfortable.

But the chair, which was made of wicker, could not support the girl’s weight and broke.

The room seemed very cozy. Three little beds with their three nightstands took up almost all the space. Goldilocks opted for the largest bed, but it was too wide. He got out and lay down in the median, but no… The mattress was too soft! She jumped up and got into the smaller bed by the window. He thought it was the most comfortable and fluffy he had ever seen. So much so that she fell into a deep sleep.

A few minutes later the owners of the house appeared, who were a couple of bears with their son, a furry and soft chocolate-colored bear cub. As soon as they crossed the threshold of the door, they noticed that someone had entered their home during their absence.

The little bear approached the table and began to whimper.

– Oh no! Someone has drunk my milk!

His parents, as surprised as he was, reassured him. Surely there was a reasonable explanation, so they continued to check that everything was in order. Meanwhile, the little bear went to sit down and saw that his chair was broken.

– Daddy, mommy!… Someone has destroyed my wooden chair!

It was all very strange. Papa and mama bears with their little one, cautiously climbed the stairs that led to the room and found that the door was ajar. They pushed her very slowly and saw a girl asleep in one of the beds.

– But what is that girl doing sleeping in my bed? – The little bear shouted, scared.

Her voice woke Goldilocks, and when she opened her eyes, she found three angry-faced bears staring at her.

– What the hell are you doing in our house? – shouted the father- Haven’t they taught you to respect the privacy of others?

– Excuse me, gentlemen… I didn’t want to disturb you. I saw the door open and I couldn’t help but enter…

– Get out of here right now, girl! This is our house, and as far as I know, no one has invited you in.


Apologizing over and over again, the girl walked out of there embarrassed. When she got to the garden, she started running home and didn’t stop until she reached the kitchen, where her mother was putting some freshly cut carnations in a vase. She arrived so red that the woman realized that something had happened to her daughter. Goldilocks had no choice but to tell everything that had happened.

His mom listened carefully to the story and said a few words that Curly would never forget.

– Daughter, there you have what happens when we do not respect the things of others. I hope that this scare has served you so that from now on, you ask permission to use what is not yours and stop snooping on what belongs to others.