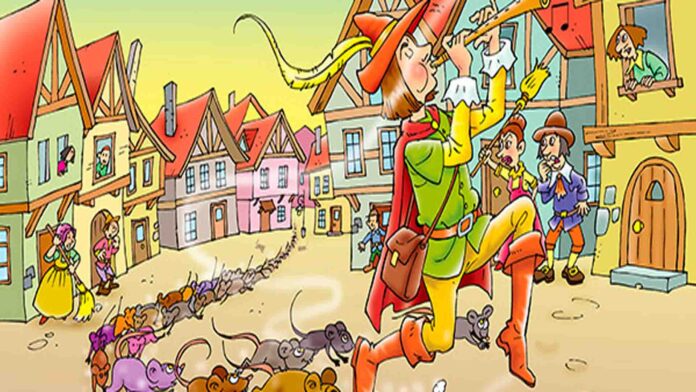 Once upon a time there was a beautiful town called Hamelin. In it, you could breathe fresh air all year round since it was located in a valley, in the middle of nature. Houses dotted the landscape surrounded by high mountains and a river passed nearby where its inhabitants used to fish and bathe when the weather was good. There was always plenty of food to go around, as families raised cattle and planted grain to make breads and pastries year-round. It can be said that Hamelin was a town where people were happy.


One day, something very strange happened. When the inhabitants of Hamelin got up in the morning, they began to see mice everywhere. They all ran in panic to close the doors of their barns so they wouldn’t eat the wheat. But this did not help much because in a matter of a short time, the town had been invaded by thousands of rodents that roamed freely up and down the street, entering every crack and hole they saw. The situation was uncontrollable and no one knew what to do.

In the afternoon, the mayor ordered all the inhabitants of the town to gather in the main square. He climbed up a very high step and shouting, so that everyone could hear him, he said:

– It is made known that the brave man who manages to free us from this nightmare will be rewarded with a sack of gold coins.

The news quickly spread throughout the region and the next day, a skinny young man with big eyes showed up, carrying only a sack on his shoulder and a flute in his right hand. Very determined, he went to the mayor and said with a serious gesture:

– Sir, I come to help you. I will clean this city of mice and everything will return to normal.

Without waiting another minute, he turned around and began to play the flute. The melody was sweet and wonderful. The locals looked at each other without understanding anything, but they were more surprised when the square began to fill with mice. Thousands of them surrounded the musician and in an almost magical way, they were stunned to hear the sound that filtered through their ears.

The flutist, without stopping playing, began to walk away from the town followed by a very long line of mice, who seemed enchanted by the music. He crossed the mountains and the annoying animals disappeared from the village forever.


Everyone was happy! The problem was finally solved! That night, children and adults put on their best clothes and celebrated a party in the town square with food, drink and dancing for everyone.

A couple of days later, the piper returned to collect his reward.

– I come for the gold coins that correspond to me – he told the mayor – I have kept my word and now you must keep yours.

The town boss stared at him and burst out laughing.

– LOL! Are you crazy? Do you think I’m going to pay you a sackful of gold coins just for playing the flute? Get out of here right now and never come back, young man!

The piper felt betrayed and decided to take revenge on the greedy mayor. Without saying a word, he took his flute out of his pocket and again began to play a melody even more beautiful than the one that had dazzled the mice. It was so soft and charming, that all the children of the town began to crowd around him to listen to it.

Little by little he walked away without stopping playing and all the children followed him. They crossed the mountains and when they arrived at a cave full of sweets and treats, the piper locked them inside. When the parents realized that the laughter of the little ones could not be heard in the streets, they left their homes to see what was happening, but it was already too late. The children had disappeared without a trace.

The ruler and all the townspeople understood what had happened and went out at dawn to look for the flutist to ask him to return their children. After searching for hours, they found him sleeping soundly under the shade of a chestnut tree.

– Hey, you, wake up! – Said the mayor, representing everyone – Give us back our kids! We love them very much and we are devastated without them.

– You lied to me! You promised a sack of gold coins to whoever got rid of the plague of mice and I gladly did. I deserve the reward, but your greed has no limits and there you have what you deserve.

All the fathers and mothers began to cry desperately and beg him to please return their children, but it was no use.

Finally, the mayor knelt before him and humbly, with tears in his eyes, said:

– I’m so sorry, young man. I behaved like a fool and an ingrate. I’ve learned my lesson. Here you have twice as many coins as I promised you. I hope this helps you understand that I really feel very sorry.

The young man was moved and realized that he was asking forgiveness from his heart.

– Okay… I accept your apologies and the reward. I hope that from now on, you will be true to your word and always keep your promises.

He took the flute between his bony hands and again, an exquisite melody came out of it. A few meters away was the cave and from its dark entrails, dozens of safe and sound children began to emerge, who ran to hug their families amid laughter and joy.

The happiness was so great that no one noticed that the young flute player had already picked up his bag full of money and with a satisfied smile, he was discreetly walking away, just as he had come.

More about this story

The story of The Pied Piper of Hamelin is a popular tale that has its origin in 16th century Germany. However, the origin of this story is not clear since it is related to certain real events that have different explanations (the plague of rats in the 16th century, the departure of children from the town of Hamelin destined to form ranks in military campaigns, etc. ). In any case, the influence of this story is indisputable since references to this tale permeate the texts of some later writers, such as Johann Wolfgang von Goethe, the Brothers Grimm or Robert Browning.


The story of The Pied Piper of Hamelintells the story of the village of Hamelin that suffers from a plague of rats and whose villagers call a rat catcher: the Pied Piper who carries a magic flute capable of making the rats follow him. The Pied Piper arrives at the town dressed in brightly colored clothes and using his magic flute he gets the rats to follow him out of town, ridding Hamelin of the unbearable plague. However, once the job is done, the town’s mayor breaks his promise and refuses to pay the flautist what was agreed. The flutist, with great anger, leaves the town swearing revenge. On the day of Saint John and Saint Paul, while the inhabitants of Hamelin are in church, the piper returns, dressed in green like a hunter and playing his flute. The melody of the flute attracts 130 children like rats,

Depending on the version of the story, the ending varies. In any case, many theories suggest that the flute player is a symbol that heralds plague and catastrophe . In addition, he is closely associated with children. It should be noted that the story is based on a real event for which a group of children left the town of Hamelin.