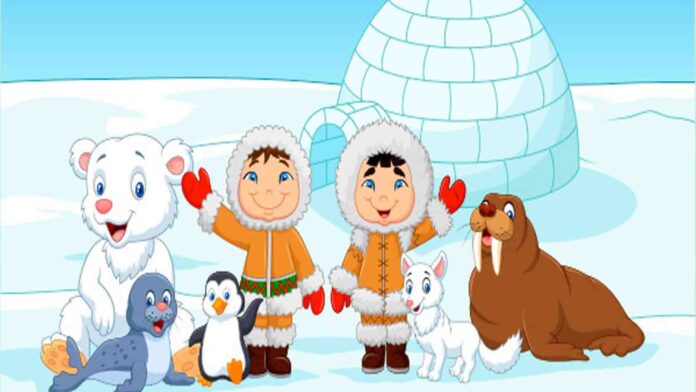 The Eskimos are the inhabitants of the areas closest to the North Pole of planet Earth. Specifically, they live in Greenland, north of the American continent, and in Siberia, in North Asia. The Eskimos who live in the northern parts call themselves Inuit, which in our language means “the people” and those who live in areas of southern Alaska, Yupik.

These territories are covered with ice and snow almost all year round, so the Eskimos have had to adapt to the difficult environment in which they live. In these lands it is not possible to cultivate, so their only means of livelihood is hunting and fishing. It is a nomadic people, that is, they do not usually have a fixed place to live, since they constantly move wherever they find food.


They survive by hunting animals such as walruses, bears and seals. They chase them on their dog sleds and capture them using spears and bows with arrows, although today they also use firearms. In spring they also fish salmon and hunt whales in the sea, going in groups in boats made of wood. For fishing they usually use nets and harpoons. They use absolutely everything from the animals: the meat to eat, the skins to make clothes and shoes, and the fat as fuel to make a fire and keep warm.

The physical features of the Eskimos are very characteristic and easily recognizable. They are short and strong, with very black hair and a wide face with slanted eyes. In addition, they live in families and are very friendly and hospitable.

Their dwellings are called igloos, ingenious round houses built with compressed snow. Although it seems impossible, inside an igloo the temperature remains warmer than outside because there is no wind and the snow itself acts as insulation. As the Eskimos warm themselves with fire, the inner layers of the igloo melt, but it’s so cold outside that they automatically refreeze, so they don’t collapse and are very sturdy. Inside the igloo the temperature is usually 0º C. Although it seems very low to us, for them, accustomed to -40º C outside, it is quite pleasant.