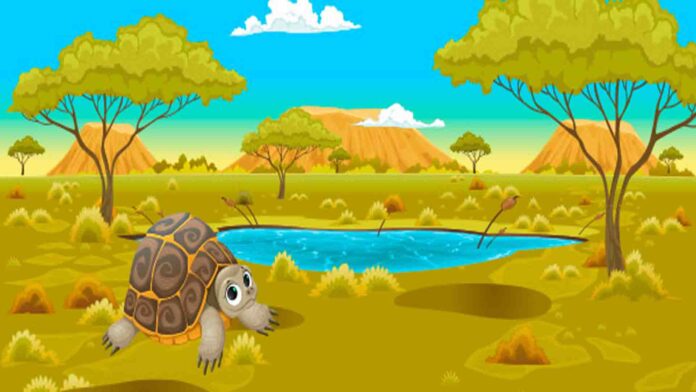 Adaptation of the African folk tale

Kuta was a male tortoise who made his home in an African grassland. The reptile, with a calm and conformist character, had always been very proud to live in that beautiful place until things changed and he began to consider emigrating so as not to return. The reason was that due to the drought in recent months, there was hardly any fresh grass growing and there were hardly any bugs among the stones. Due to the scarcity of food, Kuta was starving.


One morning when he was walking with his head down and with his spirits down, he came across Wolo, a bird that used to nest in the surroundings. The bird raised its head and greeted very kindly.

– Good evening, Mr. Kuta, long time no hear from you! How’s life going? I get the feeling that he is skinnier and haggard… Is he okay?

Kuta felt weak and didn’t feel like chatting much, but he answered with his usual courtesy.

– Good afternoon, Mr Wolo. The truth is that I am going through a rough patch. Can you believe that no matter how hard I search I can’t find even a miserable worm to put in my mouth? … As long as it doesn’t rain, I fear that many animals will end up leaving these lands.


Wolo made a sad face when he learned of his neighbor’s complicated situation.

– I know that for a turtle like you they are not a delicacy, but at least it will fill the gut with some food.

Wolo was absolutely right: seeds were far from his favorite food, but he weighed the offer and it seemed like an opportunity he couldn’t refuse.

– Ah, well, thank you very much, less is nothing! And tell me, where do we have to go?

The bird pointed its wing to the northwest.

– Behind those trees there is a huge farm and the farmer has planted a lot of grain. We can eat until we burst!

The tortoise shook its head.


– No, no, no, I don’t want to go there. That man spends hours watching with a shotgun and if he discovers me I’m lost. Keep in mind that I walk, obviously, at a snail’s pace, and that I don’t have wings to fly away in case of danger.

– Please, Mr. Kuta, don’t worry about it! What are we friends for?… I will be like a bodyguard for you. Should the farmer show up, I’ll grab him by the shell and airlift him to safety.

Kuta did not fully trust and feared that things would end badly for him.

– I don’t know, I don’t know… The guy we’re talking about doesn’t mess around and at the minimum he puts a cartridge in each of us in the butt.

– Street, street, don’t be a doomsayer! Come on, man, be a little braver. They are the best seeds in the area and you will love them, I assure you.


Poor Kuta was so hungry that he began to salivate and allowed himself to be convinced.

The bird and the turtle went together to the huge farm. Upon arrival, each went through the fence in their own way, Wolo flying over it and Kuta digging a small tunnel to get under it. Once inside they began to dig up seeds and gobble them up greedily.

With his mouth full and chewing on two cheeks, the tortoise exclaimed:

– Oh Mr. Wolo, I’m having a great time! They are so delicious that I think I’m going to become a vegetarian!

Suddenly, in the midst of tasting, they almost choke at the sound of footsteps, the shouts of a man… and the sound of three shots!

Without stopping to think that he was leaving his friend stranded on the farm, Wolo flew off at lightning speed and disappeared from the map in a heartbeat. On the contrary, poor Kuta stood still as a statue, watching stupefied as his supposed defender colleague took off at the first change.

After a few moments of confusion he realized that he was completely alone and helpless and he began to tremble. A minute later, the gruff farmer appeared before him with his hands on his hips and a sulky face.

– Ahaha! So you’re the scoundrel who steals my seeds every day?!… Well, you’re off to the sack! Tonight my wife and I will have a delicious male turtle soup for dinner.

Without another word, he grabbed Kuta by the back of the neck and stuffed him into a cloth bag that hung from his belt. The poor animal, absolutely horrified, began to kick while screaming:

The man replied with a tinkle.

– Set me free, please. It’s the first time I’ve entered your property, I promise you. In fact, I didn’t want to, but a bird that claimed to be my friend insisted and I… I was so hungry that…

– Last minute excuses don’t work for me… You’re hunted and you’ll go to the pot!

Ignoring the pleas of the animal, the farmer headed home while Kuta, inside the sack, began to concoct something to save his skin and avoid an atrocious end: the casserole.

– I only have a few minutes to devise a plan… Oh, I think I have no escape!

She was about to give up when the lightbulb of ideas inside her head lit up. Wasting no time, from inside the bag, he shouted as loud as he could:

– Sir, take care of me for a moment, please! You don’t know it, but I’m a great singer. Do you want to hear my sweet voice?

The farmer wasn’t at all interested in hearing a robber tortoise hum, but he didn’t want to appear insensitive.

Kuta had a lot of imagination and quickly invented a nice song that allowed him to bring out all his talent.

in a field of rye

finish in the belly

of the farmer and his wife!

The surprised farmer began to burst out laughing.

– Hahaha! Oh how funny you are! There is no denying that you have wit and you sing beautifully.

Kuta had succeeded in capturing his interest and he seized the opportunity. It was now or never!

– I would love to be able to sing it to your wife too… If you like, it will be my last wish.

– For me there is no problem, but you know that later we will have dinner.

The farmer came home, but his wife was nowhere to be seen.

– Because of the time it is, he must be in the river doing the laundry… I’ll go show him the loot!

He found her right away, rinsing dirty clothes in the water.

– My dear, look what I bring for you!

The farmer opened the bag and Kuta stuck her little face out to get a breath of fresh air.

– Oh, what luck, a turtle! As soon as it’s over, we’ll go home and prepare a special broth.

At that moment, Kuta looked at the man.

– Remember that you promised me that I could sing to your wife.

– True, and I always keep what I promise.

– Did I hear correctly?… This turtle knows how to sing and wants me to listen to it?

– She is quite an artist, now you will see! Turtle, show my wife what you can do.

Kuta tried to hide his nervousness.

– Madam, it will be a pleasure to perform for you, but it’s so hot in here that I’m about to pass out. Put me on the ground by the shore so I can get over my hot flash and I’ll start singing. Then I myself will return to the sack without question.

It seemed to both of them that there was no problem because they knew that such a slow animal could never escape. Confident, the farmer placed Kuta on the river bank.

– Oxygenate yourself a little out here and sing the happy song once it’s getting late.

The tortoise was grateful.

– Thank you very much, gentlemen. This breeze is wonderful and I already feel much better.

Next, he cleared his throat to tune up his voice and…

finish in the belly

of the farmer and his wife!

The farmer also had a fit of laughter.

– Hahaha!! I did not know that turtles capable of inventing such funny songs existed.

– Isn’t that incredible?… Without a doubt, this is an extremely smart turtle!

The woman, excited, looked at Kuta and begged:

– Please sing it again so my husband and I can dance! We haven’t done it in so long…

The tortoise began to repeat the tune, which was very catchy, and the spouses began to clap their hands and dance happily.

They were having such a good time that they didn’t even notice that while Kuta was singing, he was taking little steps backwards until his hind legs were almost touching the water.

finish in the belly,

of the farmer and his wife.

As he intoned the last verse, he threw himself into the river on his back and let himself be swept away by the current, using his shell as if it were the hull of a ship. As he walked away he saw the farmer and his wife stop dancing and start waving their arms, furious at having been fooled by a single male tortoise.

When they were out of sight, the intelligent Kuta came out of the water and, still humming the ditty by which she had saved herself from certain death, looked for a comfortable place to spend the night.

finish in the belly,

of the farmer and his wife.