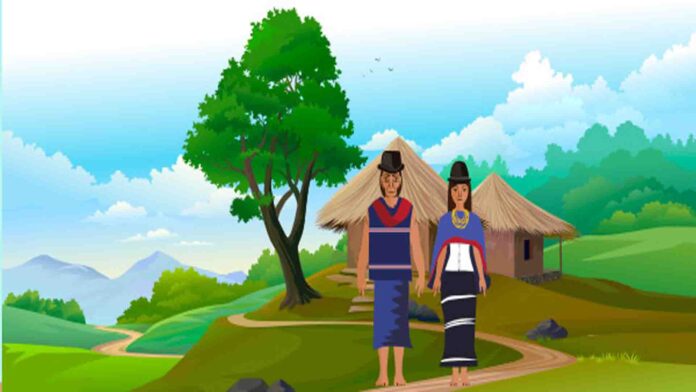 Adaptation of the Colombian folk tale

In a country called Colombia, near the Andes mountain range, lived an indigenous tribe that had settled in those lands for many years. Its members were simple people who lived together peacefully, until one day the group of young people met in an assembly and made a terrible decision: expel all the elders from the village!


The arrogant boys declared that the old men had become a hindrance to the proper functioning of the community because they no longer had the strength to carry the sacks of seeds and because their movements had become so clumsy that they needed help even to eat or wash themselves. For these reasons, they assured, it was necessary to throw them out forever.

Only a good and generous boy named Llivan believed that a great injustice was being committed and he rebelled against the others:

– Are you crazy?!… We can’t do that outrageous thing! We owe them everything we are, everything we own. They have always helped us and now we are the ones who must take care of them with love and respect.

Unfortunately none of them were moved and Llivan had to watch in horror as the old people were forced from their homes.

– This is horrible! No one deserves to be treated like this.


When he saw them walking away from the village with their heads bowed and their feet shuffling, he decided he couldn’t sit idly by. Without stopping to think, he ran until he caught up with them.

– Wait, please, wait! If you allow me, I will go with you to make you feel safer and help you find a good place to live.

The older one smiled and accepted the proposal on his behalf and that of the others.

– Of course I do, Livan. You are a good boy and not a scoundrel. We greatly appreciate your company and all the help you can provide us.

– Oh no, don’t thank me! I feel that it is my duty, but I assure you that I do it with pleasure.

Llivan took the lead and led them into a warm and beautiful valley surrounded by mountains. It took several hours, but it was worth it.

– This is the place chosen to set up the new village! The land is fertile, ideal for farming. In addition, it is crossed by a river where we can fish daily. Isn’t that perfect?


The oldest recognized that the choice was excellent.

– You have a good eye, Llivan. It certainly is a wonderful place.

For weeks the boy worked at a furious pace, building houses of mud, wood, and straw by day, and crafting hunting and fishing gear by firelight at nightfall. He was the only one who had the physical strength to carry out the toughest tasks, but the elders, who had the wisdom and experience of a lifetime, also did their bit by directing the works.

Thanks to the good advice of the elders and the great effort of Llivan, the goal was achieved sooner than expected. Meanwhile, in the other tribe, the youngsters took over and everything got out of hand, mainly because they didn’t know how things were done and there were no elders to ask for advice. This was very serious, especially if someone fell ill, because the remedies based on medicinal plants were only known by the grandparents and there was not a single one left. Where before there was peace and well-being, now chaos reigned.


A few years passed and Llivan became a healthy and strong adult. His life with the elderly was happy and he only missed one thing: to form his own family. For that reason, one day he decided to express his feelings to them.

– Dear friends, you know that I am very happy here, but the truth is that I would also like to get married and have children. The problem is that in this village there are no women. Since you are like my parents, I want to ask your permission to go to the youth village. Who knows, maybe there he might meet some special girl!

The one who always gave the go-ahead patted him on the shoulder and expressed his agreement:

– Of course you have our approval! We adore you, but it is normal that you want to fall in love, get married and have children. Go on, go and look for that wife you want so much, but please, be very careful.

– Thank you, thank you very much, I will carry you in my heart!

After giving out a lot of hugs, Llivan headed for his old village. It was almost dark when he stepped foot on it and he couldn’t help but get excited.

– Oh, how many years without seeing the place where I was born! But… why is everything so dirty and dilapidated? I’m afraid there’s something weird going on here!

He was trying to understand what was happening at the moment when several men jumped on him and grabbed him and tied him to a tree. The one who seemed to be the leader, shouted in his ear:

– We recognized you, Llivan… How dare you come back?!… You, who betrayed us years ago!

Llivan realized that he was in front of the group that had expelled the old men and he blushed with anger.

– That I betrayed you?… You are a bunch of shameless and cowardly! …Let go of me right now!

The little boss laughed and said in a mocking tone:

– Oh, yes, you’ll think I’m so stupid!… Now we’re in charge, and look where, you’re our prisoner. As soon as it dawns, you’ll get what you deserve.

Having said this, they moved about fifty meters away and sat down in a circle, eating and drinking without measure. Taking advantage of the fact that they were entertained and ignored him, Llivan tried to free himself, but the ropes were too tight!

He was about to give up when out of the shadows appeared a woman with black eyes and curly hair to her waist who, without making a sound, approached him and whispered:

– Who are you and what are you doing tied to a log?

Llivan also answered him in a low tone.

– My name is Llivan and I grew up in this town, but years ago when they banished the elders I went with them. Today I have returned to this place that I love so much, but as soon as I arrived I have been captured by that riffraff you see there.

The girl glanced at the group of men, afraid of being discovered.

– Llivan… Llivan… Yes, of course, I remember you. Well, actually, everyone in this area knows your story.

– Well, the truth is that fatal! Those guys are no good and they have no idea of ​​governing. Because of him, people are getting poorer and more ignorant.

– They kicked out the elders and on top of that they’ve been behaving like tyrants for years?… I’m sorry, but I don’t understand why you accept their rules… You should revolt!

– No, we do not accept them, but they are always armed and nobody dares to confront them. We can’t do anything but hold on!

– Well, I think the time has come to put an end to this indecency! If you help me escape I’ll fix it… I promise!

The woman fixed her eyes on Llivan’s and felt that he was being sincere. Without hesitation, he untied the rope that bound his hands.

They slipped away and came to a humble little hut. By the entrance, lying in a dusty hammock, was his little brother.

– Dear little brother, listen to me carefully: my friend Llivan is going to help us get rid of those despots who have dominated the whole town, but we need your collaboration.

Llivan was very clear about the steps to follow.

– Please, notify all the neighbors. I want them to come here as soon as possible!

Minutes later, dozens of people listened to Llivan’s speech under the pale moonlight.

– Friends, this was a prosperous town until one day the young people took over the government. Years have passed and look at the result: you are unhappier and live much worse than before.

They all nodded in agreement that what he said was true.

– Kicking out the elders was a mistake, but I think there is still a solution. Let’s make the rulers repent! For this I need each of you to take a nettle from the field.

They did not know what Llivan intended, but they obeyed without question; Later, they went looking for the dictators and found them lying on the ground, fast asleep. Llivan gave the order to act.

– They’re snoring like lions… It’s our chance! Let’s undress them and wait.

They took off their clothes in a flash and waited a few minutes for the cold of the night to wake them up. When the individuals opened their eyes they found themselves surrounded by more than a hundred people with threatening faces and a nettle in their hand. They had no escape!

Then Llivan raised his voice:

– Years ago you committed a tremendous injustice with your elders, and if that were not enough, you have ruined your people. You are truly irresponsible! If you don’t want us to rub your bodies with nettles, admit mistake and apologize right now.

The men looked at each other terrified and didn’t hesitate: they got down on their knees and crying like children they asked for forgiveness between tears.

– From now on you will respect all people equally and work for the benefit of the community until the town is once again a flourishing place.

The applause was unanimous.

– Thank you, thank you very much, friends, but the most important thing is missing: the return of the grandparents who one day had to leave their home.

Llivan heard another cheer and felt that he had said and done the right thing.

– As soon as the sun rises I will go for them. I hope that when they return they treat them with the love and respect they deserve.

Three days later, the grandparents entered their old town and were greeted with applause, hugs and kisses. The moment of collective happiness that was experienced was unique and unrepeatable.

At last, everything was back to the way it was before!… Well, not everything, because for Llivan things were even better. He was unanimously elected governor of the town and, when spring came, he married the beautiful girl who had helped him put an end to injustice. The story goes that they formed a large family and lived happily ever after.