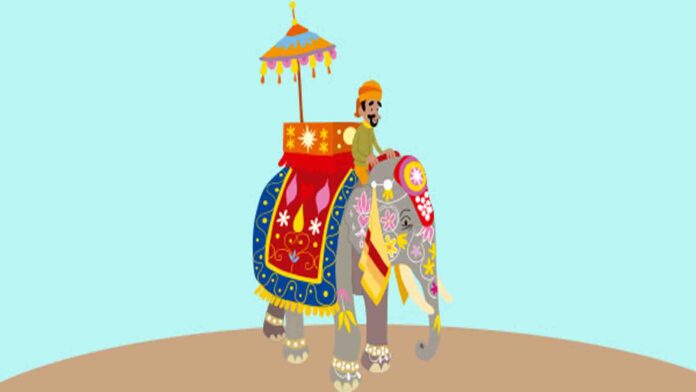 Adaptation of an ancient fable from India

Once upon a time there were three old men who had known each other since childhood and enjoyed spending good times together. They had in common that they were educated and intelligent men, but also that all three were blind from birth. Fortunately, despite not being able to see, they managed very well on a day-to-day basis, as they were still in good physical shape, their minds were working at full capacity, they could smell, touch, hear, taste…


One beautiful summer day they met at their favorite place by the river, sat on the grass, and began to talk about science. In the middle of the very interesting conversation they were startled when they heard the sound of several footsteps.

The old man with the white beard turned around, and somewhat uneasily asked aloud:

Luckily he was neither a spy nor a highway robber, but a traveler who carried a huge elephant with him on a leash around his neck, as if it were a puppy.

– My name is Kiran, gentlemen. Sorry if I scared you. My elephant and I come to drink fresh water and we’re leaving, we don’t want to interrupt your pleasant chat at all.

The three of them put on a rather strange face, a mixture of surprise and emotion. The second elder, who had a black beard, wanted to make sure of what Kiran had said.


– Did I hear you correctly?… Did you say… elephant?… A real elephant?

The stranger noticed the walking sticks lying on the grass and noticed the lost gaze of the three old men. That was when he realized they were blind.

– Yes sir, I’m going with my elephant. It’s a very big animal, but don’t worry, it won’t hurt you.

The third old man smoothed his red beard and confessed:

– We have heard of the existence of these animals, but none have ever come to this town and we do not know what they are like. Could we touch yours to get an idea of ​​what they look like?

– Of course, more would be missing! He is a very peaceful and good-natured being. Come pet him, don’t be afraid!

The three friends got up, took a few steps and extended their right hand. The white-bearded old man bumped into one of the forelegs and felt it up and down for a while.

– Now I know what an elephant looks like! It is like the column of a temple, or rather, it is like the trunk of a tree: cylindrical, large and very rough.

Meanwhile, the hand of the black-bearded old man had gone to one of the gigantic ears. The animal felt a little tickle and shook her slightly back and forth.


– What are you saying, dear friend, an elephant has nothing to do with a column! My conclusion is that it looks like a huge fan for two very obvious reasons: first, because of its flat shape, and second, because when it moves, it produces a most pleasant air. Is it that you do not notice?

At that moment, the old man with the red beard brushed his fingertips against something soft that hung from somewhere much higher than he was. It was the quadruped’s trunk, but of course he didn’t know that.

– But what are you telling me? As far as I can verify an elephant is like a rope. Clearly, it is an elongated, flexible and soft specimen, like an eel or a snake. Undoubtedly a strange shape for a mammal, but anyway… Everyone knows that nature is amazing!

The owner of the elephant watched the scene in silence and could not help but think:

After this reflection he decided that before they asked him, the best thing was to leave as soon as possible.

– Gentlemen, they are waiting for me in the village and I am afraid that I will be late. I hope you have found the experience of touching an elephant interesting. Have a nice day. Bye!

Accompanied by his bulky ‘pet’ Kiran he walked away leaving the three friends immersed in a heated argument about who was right. A conversation that, by the way, lasted hours and was useless: the elders were unable to agree on the true shape of the elephants.

Moral: People give their opinion based on our personal experience and that is why we always believe that we are right. If you analyze this fable you will see that others, thinking differently from us and seeing things from another point of view, can also have it. Never underestimate other beliefs, other ways of looking at life, because often the absolute truth does not exist and everything depends on the color of the glass with which you look at it.