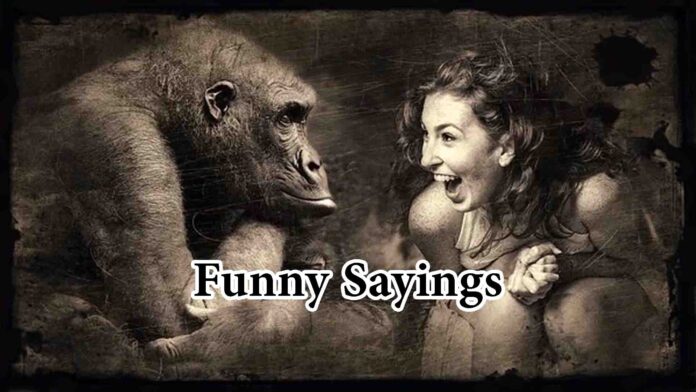 Funny sayings for children and their meaning

For anyone who hears a proverb, it is easy to identify with what they are hearing, since proverbs are made up of colloquial and commonly used words. Being expressions whose origin comes from the people, and which are also preserved thanks to word of mouth through many generations, it is usual that simple words used by everyone are composed. Which leads to very funny situations,because it is easier to identify with everyday life than with more complicated expressions. The ability of a proverb to express ideas simply, and with simple words, is what makes them so catchy and accessible. Add to this humorous elements such as exaggerations or comparisons, and they make the saying a sure way to make people laugh. The most important thing is not that they are able to laugh with the proverb, but also that they understand the message they contain. In general, there are many people who relate more to the humor of a saying than to its content.

Some sayings start to be funny when they are slightly modified. Perhaps a traditional proverb with a small change in the words, ends up resulting in a funny phrase but with the same moral content. There are even sayings that are so well known that even if they are modified, they are easily recognizable, so a change in their structure only helps to give the situation an extra touch of humor. A proverb becomes a humorous phrase, without neglecting its moral value.

The use of irony, sarcasm and exaggeration are characteristic of a proverb, but also of a joke . Thus, both figures feed on each other, so it is not uncommon to laugh at a proverb or learn a lesson with a joke. The difference is that the joke is designed to make you laugh, while the proverb is to learn a lesson. But both manifestations are popular expressions characteristic of a particular culture. They are born from popular expression, so it is normal that they do not follow rigid rules regarding their structure. Even so, the ability we have to laugh at a saying or a joke essentially comes from the ability we have to identify with the situation that is arising.

An Update on Sayings

Although proverbs are considered obsolete and on the way to disappearing, proverbs are still part of our daily expressions. The generations that today still resort to a proverb to point out a point or teach about a circumstance are different. Or just to lighten an awkward situation.

One way that proverbs have had to survive is to adapt to the times that pass. This is where the creativity of people stands out. Not only do they adapt well-known proverbs with new phrases or elements from popular culture, but they also add a humorous factor to make them more attractive. This is how today there are proverbs that refer to social networks and current problems. In this way there is always the relationship between today and an old lesson.


Another safe source of sayings and funny phrases are the traditional media. Movies or television programs always leave a phrase in the group that resonates and makes them laugh. Hence, some proverbs are modified to remember a character, or a television program or movie. Associations are even made of how and what a specific character would say, which has become part of the collective memory.

Children learn much faster by playing. The games are their first approach to the dynamics of the world they will face as adults. From there they get many life lessons.

As proverbs are these lessons summed up in a sentence, they are perfect to teach them a moral lesson or value. And the message is understood and received much faster if the saying makes them laugh. Laughter always represents an immediate connection to any event. Not only children, adults also connect faster with a topic through laughter. This makes it easier for a child to absorb the moral value contained in the proverb, since it is a phrase that is making him laugh.

Although you should never underestimate a child’s ability to learn, it is always good to reinforce the moral that is learning through some more concrete explanation. The important thing is that the saying fulfills its function, so that the child understands the message in a clear and pleasant way.

Human beings have always had a direct connection with animals, they are part of our lives, either as pets or to serve us. We cannot separate the development of humanity from the company of animals. This is how it is easy to identify ourselves with proverbs that refer to them, it is a way for the message to arrive more quickly and the content of the proverb to be understood.

A characteristic that always stands out in proverbs is the use of comparisons and metaphors with animals. There are many sayings that involve them, and they exist for almost any situation, giving animals characteristics that are believed to be their own. While it is true that some animals have a defined behavior or trait, it is also true that proverbs exaggerate these characteristics in order to deliver a message. But this is where the hilarity of sayings comes in, because by exaggerating animal characteristics or comparing them to human behavior, the message certainly becomes funny.

Something that can give us joy during times of adversity is listening to a saying. Sometimes we go through situations that are not ideal, that test our faith in ourselves and that we lose hope that the situation can improve. Sometimes, many of these situations are caused by ourselves without knowing it, but we always hear some saying regarding that situation and immediately we are able to accept and understand why we are living that particular moment of our lives.

It is the ability that proverbs have, to encompass feelings and make us feel that we are not alone, that many generations ago, many people, went through the same situation and left their wisdom available to us. It is at this moment that we discover our ability to laugh. Well , there will always be some saying that not only reminds us why we are experiencing a certain situation, or that does not teach us something that we must learn, but also gives us back a little of the hope that we need.

But in addition, proverbs give us a very powerful tool to face adversity, and it is the ability to laugh at ourselves and our situations. Understanding what we are going through at a given moment, proverbs are able to point out to us that perhaps our attitude in such a situation is not the most appropriate or they can lighten the moment by making us notice traits of our personality that can really end up being funny depending on the context.

Not all sayings are funny

Sayings resort to exaggerations of all kinds to exemplify a situation. Sometimes these exaggerations are completely harmless, but in other situations, the proverbs present physical, personality, cultural or racial traits as a joke. This is also not defined with a clear intention to hurt the feelings of the groups to which it refers, but rather those sayings were created in a historical context, where applying that exaggeration was done correctly.


An example of this is the proverbs where Jews, gypsies or Galicians participate. Certainly in a certain context the exaggerations they make regarding these ethnic groups may seem funny, but for anyone who belongs to any of these ethnic groups it can be offensive. But not everything has to be so negative or relegate to a situation of what is right or wrong, because proverbs have the ability to change and transform according to the historical situation that is developing. So some sayings that refer to attitudes that are not typical of any social group, have been modified in such a way that they do not lose their humor and are still capable of delivering the lesson they contain.

The same applies to regionalisms. There are proverbs that refer to regions or places in a ridiculous way, or where they exaggerate their negative aspects; or on the contrary, they exaggerate the positive features, leaving their neighboring regions in a bad position. Once again, this is not done with the purpose of ridiculing or offending, but simply because the proverbs come from the street, they are sayings that crossed generations as they were conceived; Although some sayings still make us laugh, we must always evaluate their content so as not to highlight negative aspects of a region, or a group of people.