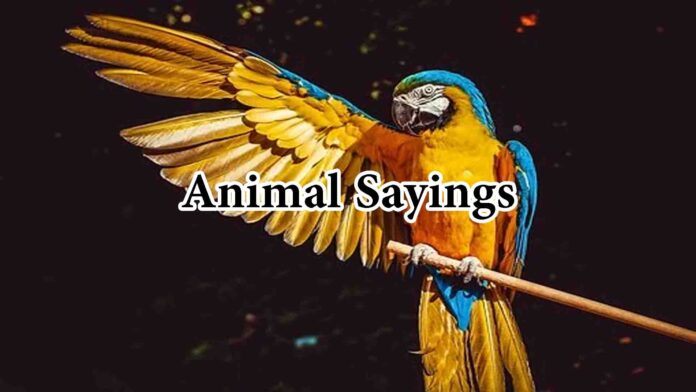 Animal proverbs are all kinds of sayings that illustrate, through metaphors, some knowledge that has endured through time and is based on the wise intelligence of nature. If you want to learn proverbs whose protagonists are animals, this article will teach you about the different proverbs based on these wonderful beings and you will be able to learn a little about their paremiological study.

What message do animal sayings convey to us?

The proverbs and sayings about the animals that abound on earth transmit us messages that, through oral tradition, try to explain natural phenomena and give meaning to various everyday situations. You already know that the bird is known by its song, and if you want to surprise us with the best sayings about animals, we invite you to continue reading this post so that you can add several animal sayings to your vocabulary that can help you express yourself in a more creative way.


From the paremiological study , where all kinds of sayings, proverbs and sayings are analyzed, animal sayings abound in the compilations. This type of popular sayings about animals instruct on knowledge that has been taken from experience and that is transmitted from generation to generation through phrases with a certain grace so that they are easy to remember.

Teachings through animal sayings and their meaning

The teachings left by animal sayings are colorful messages that our ancestors wanted to transmit and that their legacy endures through the years. This characteristic makes the sayings of animals statements that want to imply some kind of teaching and that this is not lost over time. The people who use the most sayings are those who bring with them an important cultural legacy which has been transmitted from generation to generation.

Sayings, both those related to animals and others elaborated by popular human wisdom, constitute a cluster of thoughts that determine a society at a given time and place. However, when proverbs continue to be used over the years, it is because they have acquired the ability to convey certain lessons that once happened and that were important in some way and continue to happen. There is always a precise and timely saying to accompany a certain situation that may happen to us.

Curiosities of sayings about animals

Animal proverbs, in a certain way allude to the wisdom of nature and make us understand the forms in human beings, as part of it, we learn from what we see and from animals we have learned many things. The rooster sings in the morning as a welcome greeting from the sun, human beings observe these behaviors and learn from them on many occasions, this is how animal proverbs are born. Through the observation of the world and daily events, proverbs are born that are repeated by generations through time as a symbol of teaching experiences in the different cultures of the world.


Have you ever heard a donkey talk about his ears? Or have you ever seen mice literally throw a party with balloons and drinks, and even perform wonderful dances as a couple when no cats are around? Animal proverbs clearly use anthropomorphic qualities to designate human actions, but it is also important to remember that they are metaphors created by human beings to indicate facts of daily life and that they are used on various occasions to express some argument with intelligence and suspicion.

Speaking with proverbs generally means that with some ease another person in any part of the planet can understand what is said without giving further explanations, since proverbs or popular sayings by themselves summarize facts and teachings that are extracted from everyday life and that many Sometimes they make allusions to the animal world.

In the world of proverbs, paremiologists refer to the fact that usually proverbs, in addition to being popular sayings with a certain grace in their structure, some also have rhymes and prose that facilitate their memorization. What characterizes the proverbs of other forms of language is that they collect popular knowledge of a culture and learning from the environment that have been preserved and continue to be preserved every time they are learned and shared in society. Speaking with proverbs is part of a historical and cultural recognition that comes from generations ago and continues to be reproduced due to the validity granted to it depending on the circumstances.


There are animal sayings that are certainly funny and others that try to warn about dangerous situations. You will probably find sayings of animals that support some action or that indicate explanations in a game of words that you will find curious. These often include specific messages that should not be taken literally, but instead should be taken as a starting point to understand their metaphorical meaning. Learn to know the different sayings of animals so that given the circumstances they do not give you a cat for free .