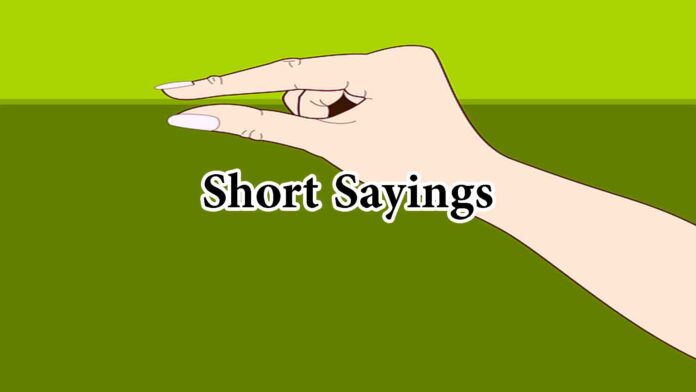 One of the most iconic works of literature, this classic by Miguel de Cervantes, where one of the characters, the well-known Sancho, is a fan of proverbs and usually expresses himself through them. The book explains the use of proverbs and Sancho’s attitude, to the point that the hidalgo Don Quixote ends up reprimanding his brave squire for abusing so many proverbs that his lexicon keeps.


How fun to communicate with proverbs! My grandmother always had a short saying for each situation and with very few words to communicate everything she needed to say in one sentence. Sayings are wisdoms that our ancestors have left us and their value is so great that we continue to hear them everywhere. We all know a short saying that some older person will have told us at some point.

Short sayings for boys and girls

Sayings are said all over the world and always refer to the traditions of a given culture. By definition, many authors agree that proverbs are anonymously authored.

After all, proverbs have passed from mouth to mouth and among so many people who have mentioned them over and over again that the person responsible for creating a short proverb ends up being lost in history. It is not clear who invented them, but we all use them as if they were our own.

And why not? Sayings contain an important cultural legacy and wisdom that is transmitted generationally in oral language. It is one of the funniest forms of communication that we will find in our human language.


Sayings are always timely and can contain quips, be direct or even funny. There are short sayings for all kinds of occasions, they generally have rhymes and sayings are considered to be the most representative paremia of popular wisdom.

The history of proverbs may be as old as the history of language. The first sayings in the world, the oldest of which there is a written record, date back to the Middle Ages.

Many years ago, very few people knew how to write and read. Illiteracy was quite widespread and the technology that we currently have did not exist. Knowledge, learning, experiences and experiences were transmitted orally. Even the news reached every corner thanks to those who learned the stories by heart. To learn the stories, those adventurers often performed prose and even staged plays to convey the information.

The proverbs were also transmitted on trips and that is even why we sometimes find similar proverbs in different languages. With the ease of singing, proverbs began to be said over and over again due to their allusion to some historical event or customs of a time, before becoming commonly used.

Origin of the term proverb

The word proverb comes from the French word refrain and in many cases from the Provençal refranh. The etymology of the saying refers to its origin in the history of the lyric refers to a meaning on a short sentence.


Since the Middle Ages there is a record of the appearance and use of proverbs. In other words, since the time when only kings ruled the world, proverbs have made history and have allowed the transmission of ancient knowledge.

What is a short proverb?

The proverb is a paremia that has excelled over others such as the proverb or the saying. The perpetuation of short sayings over time has a lot to do with their function and mnemonic structure that facilitates their memorization.

A proverb is a short phrase that exemplifies popular tradition and culture. Short proverbs are usually shared between people orally and in some way, all proverbs contain a meaning as life advice that we should take into account.

The language used by short sayings is usually simple and easy to understand, they generally include rhymes or verses to give it a picturesque or witty meaning. That is why the structure of short proverbs is usually found in paired form.

Sayings have the peculiarity that being anonymous and being used in various contexts, they lose their sense of temporality. That is to say, that the use of short proverbs transcends times and ages. A short saying can be said by anyone and will be appreciated by those who like advice.

Short proverbs are part of the folklore and culture of a region. In all countries there are thousands of proverbs that are constantly reproduced in society. They are on a wide variety of topics.

There are short sayings about the weather, about food, about work and they remind us of the duties of certain trades. There are short sayings that refer to religious or social issues and there are even those about the tasks of the field, the seasons, the climate and the life of farmers. Many sayings also allude to health, prosperity and misfortune.


There are also many proverbs that recount in a few words some rules of modesty or ethical rules, exposing their moralizing or dogmatic inclinations. We could take these proverbs as rules of behavior that are transmitted through generations and that are short so that remembering them is as simple as possible.

The really interesting and curious thing about short proverbs is that they have a certain didactic way of transmitting that they are directed towards the instruction that it would be the most convenient thing to do given a situation.

As has been said, the vast majority of proverbs are anonymous. However, within the studies of paremiology “the saying is the wisdom of many and the acuity of only one” . Regardless of the authorship that any sentence pronounced supposes, the essential thing about sayings is that several people give them validity and like to maintain their continuation in the language.

It may be that a specific individual has had the lucidity to say something creative or attractive as a result of their experience and daily experience, or it may correspond to the exercise of their reflection. But what makes a proverb properly a proverb is that what has been lived has been contrasted, accepted and spread by others through time.

We can basically say that the creation of a proverb is all teamwork by actors who are generally unaware of the importance that any phrase may have. When dictated expressions are successful and accepted by the community, they are socially granted paremia status.

In the book Proverbios, Adagios y Refranes del Mundo Entero written by Julio C. Acerete, a scholar of paremiology, an excellent investigation of the subject was carried out, compiling, analyzing and publishing a great variety of proverbs.

While he dedicated himself to the arduous task of studying the proverbs that are said throughout the world, Acerete became interested in learning about the history of proverbs. He states that the first compilation of proverbs was made by Aristotle, followed by Chrysippus and Cleante. Even Plutarch and Pauto both contributed to the continuation of many short sayings.

There is also a record that Shakespeare and Erasmus of Rotterdam used various aphorisms in their works, as well as adages and some ancient proverbs. Among other thinkers, Miguel de Cervantes Saavedra also made a very intelligent parody of the use and abuse of proverbs.

Many short sayings that we know in Spanish come from other cultures such as Arabic or Greek; and certainly many of the proverbs we know come from their translation from Latin. There are many sayings that are simple traces of ancient superstitions and even spells.

Although short proverbs are considered summaries of popular wisdom, many proverbs, not exclusively the Spanish proverb, have a certain reputation for representing conservative thinking and in some cases could be considered retrograde.

Those phrases that have been repeated for years by our grandparents contain an important cultural legacy. It is important to keep in mind that proverbs often have a meaning that is not entirely literal, but refers to circumstances that anyone can witness.

Currently, short proverbs express advice, thoughts and ideas in a diverse way and talk about multiple topics. Sayings are popular phrases transmitted orally and we consider them limited with a very strong meaning.