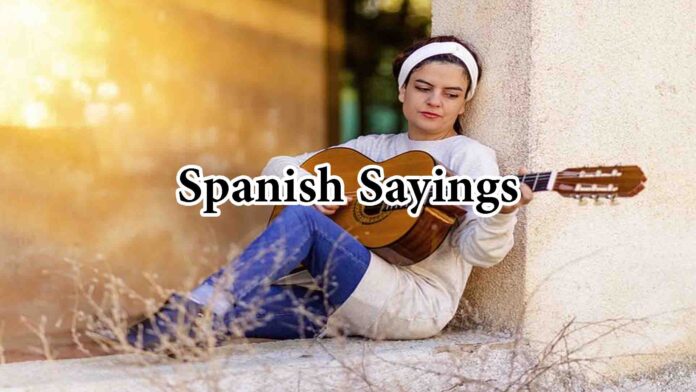 The Spanish proverbs have become a collection of historical passages, and were invented during times that are no longer part of our reality, although our history. But this is the beauty of proverbs, especially proverbs that allude to Spanish culture. They are a testimony of the folklore of the region, as well as its history. They have become the witness of several generations, which contributes to the conservation of collective memory, the most important passages that define the culture of Spain.

Spanish proverbs and their meaning

Although sayings can be universal, it is important to know how they are configured. Many Spanish proverbs have been moving through several generations, and even borders, so sometimes it is not clear what their meaning is; or are used incorrectly to prove a point. That is, the saying is well said but poorly applied to a certain situation.


They are phrases, sentences, even some micro-stories that serve to teach some kind of lesson, or just to reflect on some common event in everyday life.

The Spanish proverb is very vast. Up to thousands of proverbs from Spain or in Spanish can be registered. Many of them with the same meaning, or with the same lesson, but adapted to a particular circumstance.

History of proverbs in Spain

Sayings commonly do not have a specific origin, although some are literary quotes or biblical passages that end up becoming sayings.

Since the Middle Ages, some troubadours used the word “refrain” to refer to a phrase or chorus that became very popular during their recitals. From there derives the current word “saying”. The appearance and use of a proverb depends a lot on the culture of the region, since proverbs are a reflection of it. In many of them the customs and thoughts of some region of Spain are contained. Although, many of the situations to which it refers are universal situations, which can occur in any region of the world.


Even in Spain many sayings are regional adaptations of more universal sayings. It could be said that each region of Spain has its own repertoire of sayings. This is the most curious, but also picturesque part of the matter, that proverbs can range from the most profoundly introspective to the funniest, but all with the particular touch of the region where it is most used. Some proverbs are even attributed directly to certain regions of Spain, without knowing for sure if they actually originated there.

Even so, there are sayings that represent obvious truths or quite clear concepts that any society can guess. For this reason, many Spanish proverbs were born to show the same reality but in different places. When the routes of all the regions of Spain began to be unified and the towns began to establish relationships, it was discovered that there had always been some analogous phrase or proverb between different populations.

Something that is very true is that the proverbs are a sample of the time and the context that certain areas lived. Spain is a clear example of this, as there are many proverbs where anti-Semitism is alluded to, for example. It is clear that the context of these proverbs comes from a Spain that considered itself completely Catholic.

Leaving aside the questioning of the country’s history, the truth is that this popular “wisdom” only reflected the reality of the historical moment in which it emerged, even though today any proverb that promotes any prejudice is out of context.


They were only phrases coined by the majority of the population, who at some point believed in stereotypes that are not real, and proverbs, being part of the culture that is expressed by word of mouth, have managed to survive different generations, thus perpetuating some of these misconceptions.

Perhaps today, although the essential content of the proverb can be very useful and remain current, some can be hurtful or out of context for the populations to which it refers. But once again, the proverbs are just a sample of a historical reality that is not necessarily the current reality of Spain.

Sayings today tend to be much more inclusive and refer to universal popular culture. We live in a globalized world, so regional references have been lost, or adapted to a much more global type of communication. However, within Spanish culture, communication through proverbs is very common and is part of Spanish society. So any proverb that is used or invented today will always have the touch that only a Spaniard can give it.

Most used and well-known Spanish sayings

But in addition to the geographical reference, many proverbs allude to particularities of the places that are mentioned. The proverbs could be about a territorial dispute like the one over the towns of Pinto and Valdemoro, or the need to have money to visit Barcelona. Being a sample of the regional culture, they could not fail to highlight the peculiarities of some regions. This is why even today, even outside of Spain, proverbs are used where places like Seville, Madrid, Cádiz or Málaga are named.

In summary, it is possible to make a whole map of Spain through its proverbs. An interesting exercise would be to trace a travel route through the places in Spain that we can hear in popular sayings.

Food also as a saying

Another important topic mentioned in Spanish proverbs is food. Spanish gastronomy is very varied, but the periods of famine that the nation has experienced have defined the feelings of its inhabitants. Let us remember that the origin of many proverbs could be spread over more than 400 years of history, so it is not uncommon to find proverbs alluding to times of scarcity.


There are also sayings that speak of some ingredient or condiment, since the Spanish peasant of medieval times is characterized by eating in a simple way, for which it is common to think that in their daily life some ingredient or food stands out that caught their attention.

Not to mention the drink. An important milestone in Spanish culture is the one represented by the drink. Hence, the typical proverbs of the country, make mention of the different drinks that exist in the region; and of course and more importantly, its side effects.

We could say that two drinks compete within proverbs: water and wine. Both are very popular, and the first very necessary. As proverbs are a reflection of everyday life, it is not surprising that most revolve around both liquids.

But Spanish proverbs did not stay in Spain. Through the process of discovery and subsequent colonization of America, many proverbs traveled to the new continent. Today, many of the proverbs used in Latin America are derivatives or regional adaptations of Spanish proverbs. They found a way to penetrate the culture of each country that speaks Spanish, and transform themselves in such a way that they can express the same idea.

However, there is still a group of proverbs that are still used in the same way on both sides of the ocean, as they have managed to survive time without presenting modifications or regional adaptations. Not only that, many Latin Americans, through repetition, have given it a meaning and a context, sometimes without knowing what the words mean. Well, even if it were the same language, many proverbs are so typical of Spain, that they use terms that are not part of the common language.

This is part of the universality of the message that a proverb can have, because beyond the historical and geographical context, the lesson that it wants to make clear is perfectly understandable. In addition, most of the Spanish proverbs have that character that the Latin American countries inherited from those who were once their conquerors. Today, proverbs create one more bond that links all Hispanic-American cultures.