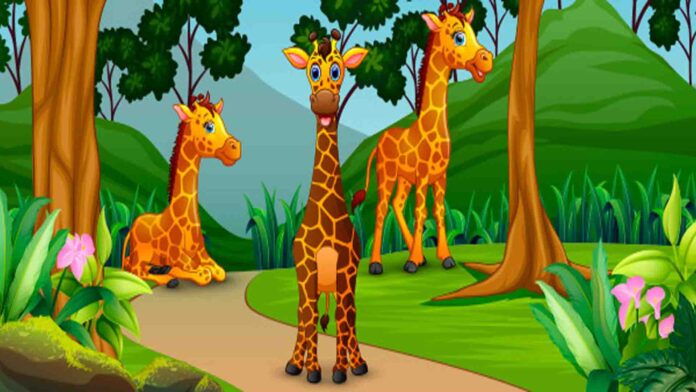 Giraffes are large mammals that live throughout the African continent. Its natural habitat is the extensive plains, forests and savannahs.

Giraffes have a stylized and very unique body thanks to the fact that they have four large legs and a very long neck. They measure up to six meters, so they can boast, without fear of being wrong, of being the tallest animals on the planet.


Two small hair-covered horns called osicones stand out on its head, and on each side of its cute little face, two huge bulging eyes that allow them a panoramic view of their surroundings.

Another of their peculiarities is that they have a beautiful cream-colored coat dotted with spots in different shades of brown. This fur has a fundamentally practical function: it helps them to camouflage themselves to mislead possible enemies. In addition, to reinforce your own safety, this curious “coat” has a characteristic natural smell that repels parasites.

You will never see a giraffe feed on meat or fish. It is a herbivorous animal that, as you may have seen in the zoo or in a documentary, spends most of its time eating. Have you ever wondered what the reason is? Well, it’s easy to deduce: it is so big that to survive it needs to eat at least fifteen kilos of food a day.

As it is so tall, it can easily reach the fruits of the treetops that other animals cannot access even in their wildest dreams. It skillfully catches them with the help of its large, strong and prehensile tongue; the latter means that it can twist it at will to grab the branches of trees and even rip them off. The inside of its mouth is so hard and resistant that it can even bite branches covered with thorns without harming itself!


The giraffe is a ruminant because it chews its food, swallows it, digests it a little, and returns it to its mouth to continue chewing it. As for her favorite daily menu, there is no doubt: she loves acacia leaves, and since she is a glutton, she eats them non-stop. On the contrary, you don’t need to drink a lot of water and sleeping a couple of hours a day is enough.

As for the character, it must be said that, although sometimes the males fight among themselves, the giraffe is an animal with a calm character that lives an average of twenty-five years peacefully with its congeners.