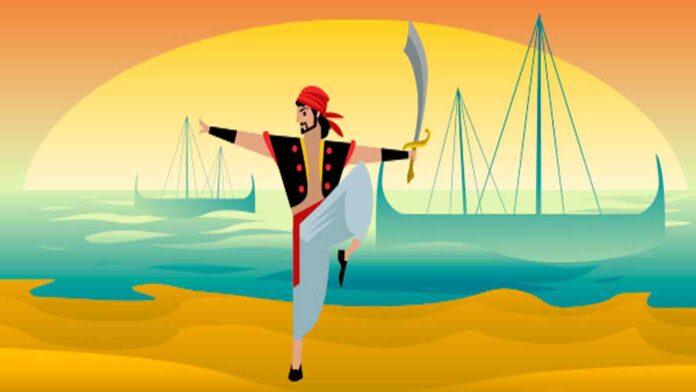 Adaptation of the classic tale of One Thousand and One Nights

Many years ago there lived in Baghdad a young man whose job was to carry goods throughout the city. Every day he ended up exhausted from carrying so many boxes and he lamented that what he earned did not help him stop being poor.


One day, at the end of the day, he sat down to rest at the door of the house of a rich merchant. The man, who was inside, heard him complain about his bad luck in life.

– Work and work, it’s the only thing I do! At the end of the day I only manage to raise three or four coins that I barely get to buy a crust of bread and a little smoked fish. What a disaster of mine!

The merchant felt sorry for the boy and invited him to dinner with something hot. The boy accepted and was amazed to enter such a luxurious home with such rich delicacies on the table.

– I don’t know what to say, sir!… I have never seen such wealth.

– That’s right – answered the man politely – I’m very lucky, but I want to tell you how I got all this you see. No one has given me anything and I just hope you understand that it is the fruit of a lot of effort.

The merchant, whose name was Sinbad, related his story to the intrigued boy.

– You see… My father left me a good fortune, but I wasted it until I was left with nothing. So, I decided that I had to become a sailor.

– Yes, but it wasn’t easy. During the first trip, I fell off the boat and swam to an island, which turned out to be the back of a whale. The scare was tremendous! Luckily I was saved from being swallowed by her. I managed to grab hold of a barrel floating in the water and the current carried me to the shores of an unknown city. I wandered from one place to another for a while until I managed to get admitted on a ship that brought me back to Baghdad. Those were very hard days!


He finished speaking and gave the boy a hundred gold coins in exchange for the next day, when he finished his work, he would return home to continue listening to his stories. The young man, with his pockets full, left bouncing with joy. The first thing he did was buy a good piece of meat to prepare a roast and he put on his boots.

The next day he returned to Sinbad’s house, as they had agreed. After dinner, the man closed his eyes and remembered another part of his exciting life.

– My second trip was very curious… I spotted an island and we docked the boat in the sand. Looking for food I found an egg and when I was about to take it, a huge bird landed on me and grabbed me with its strong legs, lifting me up to the sky. I thought he wanted to drop me in the sea, but luckily, he did it in a valley full of diamonds. I grabbed as many as I could and, badly wounded, barely got out of there. I managed to locate the crew of my ship, but I almost didn’t tell.

When he finished reminiscing about his second trip, he gave him another hundred gold coins, inviting him to come back the next day. The young man loved the adventures of old Sinbad the sailor and was on time for his appointment. Once again, the man plunged into his passionate memories.

– It may seem strange to you, but despite the fact that I was already living comfortably, I was not satisfied and wanted to return to the sea a third time. Again, I had very exciting adventures. We arrived at an island where hundreds of wild pygmies lived and destroyed our boat. They seized us and took us to their leader, who was a great giant with one eye and a frightening look.

Yes, it was terrifying! He ate all the sailors, but since I was very skinny, he left me aside. When he finished devouring them he fell asleep and I took the opportunity to take the poker from the coals, which was red hot, and stuck it in his only eye. The scream was terrifying! He turned on himself angrily but he could no longer see me and I took the opportunity to flee. I got to the beach and a merchant who had a small boat picked me up and gave me some fabrics to sell when we reached a safe port. Thanks to your generosity, I made a huge fortune and returned home.

The young man was excited listening to the stories of the intrepid sailor. How many adventures had that man lived!…

For seven nights, Sinbad told a new story, a new journey, each one more amazing than the last. And as always, before saying goodbye, he gave her a hundred coins.

When their last meeting ended, they said goodbye affectionately. The merchant did not want him to leave without first saying something important:

– Now you know that, who wants something, something costs him. Destiny is something that must be fought for and that each one must forge. Nobody in this life gives anything away! I hope that the money I have given you will help you to start new projects and that what I have told you will serve you well in the future.


The young man understood that old Sinbad had achieved everything based on risk and effort. Now he had seven hundred gold coins, but he had learned that he should not be trusted. Although he would save part of it and invest part of it, he would continue to work hard so that one day in the not too distant future, he would be able to enjoy the same quiet and comfortable life as his adventurous friend.