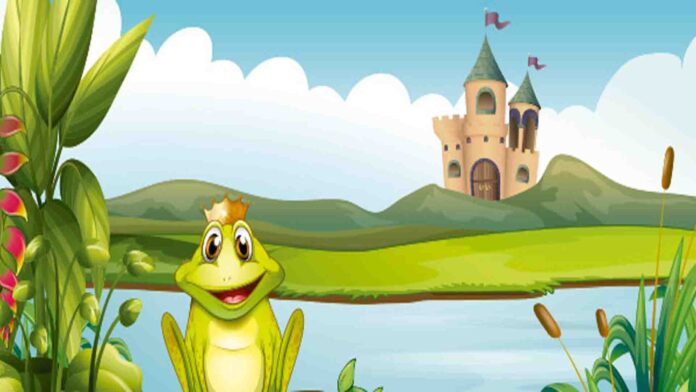 Once upon a time there was a king who had four daughters. The smallest was the most beautiful and mischievous. Every afternoon she would go out to the palace garden and run non-stop from here to there, chasing butterflies and climbing trees. She was hardly ever still!


One day she had played so much that she felt very tired. He sat down in the shade by the water hole at the end of the path and played with a golden ball that he always carried around. She was so distracted thinking about her things that the ball slipped from her hands and fell into the water. The well was so deep that no matter how hard he tried, he couldn’t retrieve it.

She felt very unhappy and began to cry. Inside the well there was a little frog who, hearing the girl’s moans, stuck his head out above the water and said:

– What’s wrong, precious? You look like a princess and princesses as cute as you shouldn’t be sad.

– I was playing with my golden ball but it fell into the well – the girl sobbed inconsolably.

– Do not worry! I have the solution to your sorrows – said the frog smiling – If you agree to be my friend, I will dive to the bottom and retrieve your ball. What do you think?

– Great, little frog! – said the girl – I think it’s a fair deal and you would make me very happy.

The frog, neither short nor lazy, took momentum and dived to the depths of the well. After a while, he appeared on the surface with the shiny ball.

– Here it is, friend! – panted the exhausted frog.

The princess took the valuable golden ball in her hands and without even thanking her, she ran towards her palace. The frog, perplexed, shouted:

But the princess was already lost in the distance, leaving the frog sad and confused.

The next day, the princess woke up in the morning when a ray of sunlight came through her window. She put on some flirty slippers adorned with feathers and tied up her hair to go down with her family to breakfast. When they were all together, someone knocked on the door.

– Who will it be? – Asked the king as he devoured a rich toast with honey.

– I will open! – Said the youngest of her daughters.

The girl went to the huge gate of the palace and did not see anyone, but heard a voice saying:

– It’s me, your friend the frog! Do you not remember me anymore?

Looking down at the ground, the girl saw the little animal staring at her with bulging eyes and mud-spattered body.

– What are you doing here, you disgusting creature? I’m not your friend! – The princess yelled, closing the door in his face and returning to the table.

Her father the king, who did not understand anything, asked the girl what was happening and she told him how she had met the frog the day before.

– My daughter, you are ungrateful! That little animal helped you when you needed it and now you’re being horrible with him. If you told her that you would be her friend, you will have to keep your word. Go right now to the door and invite him in.

– But daddy… It’s a dirty and stinky frog! – She complained

– I told you to invite him in and show him gratitude for helping you! – the monarch bellowed.

The princess obeyed her father and suggested that the frog sit with them. The animal greeted everyone very kindly and wanted to climb on the table to reach the food, but it was so high that it was not able to do so.

The princess, holding her nose because the frog seemed disgusting to her, took it with two fingers by one leg and placed it on the table. Once upstairs, the frog said:

– Now, bring me your porcelain plate to try that cake. I’m sure it’s delicious!

The girl, very reluctantly, shared her food with her. When he had finished, the frog began to yawn and said to the little girl:

– Friend, I beg you to take me to your bed because I am very tired and I want to sleep.

The princess was horrified at having to leave her bed to a dirty and sticky frog, but she didn’t dare complain and took it to her room. When she was already covered and warm between the quilts, she looked at the girl and asked her for a kiss.

– Will you give me a goodnight kiss, won’t you?

– But what are you saying! Just thinking about it makes me want to throw up! – snapped the girl, fed up with the situation.

The little frog, heartbroken by these cruel words, began to cry. Tears slipped down his green jowls and soaked the sheets. The princess, for the first time all night, felt very sorry and exclaimed:

– Oh, please don’t cry! I’m sorry I hurt your feelings. I have behaved like a capricious child and I ask your forgiveness.

Without hesitation, he approached the frog and gave him an affectionate kiss. It was such a tender and sincere gesture that suddenly the frog became a handsome young prince, with blond hair and eyes bluer than the sky. The girl was paralyzed and unable to speak. The prince, smiling, said:


– An evil witch put a spell on me and only a kiss could break the spell. I owe you. From now on, we will be true friends forever.

And so it was… The prince and princess became inseparable and when they were older, they got married and their happiness was eternal.

More about this story

The tale of The Frog Prince, or The Frog King  is a fairy tale originally written by the Brothers Grimm . In addition, the Disney movie made in 2009 and entitled “Tiana and the frog” is loosely based on this story.

In the original version the spell is broken when the girl throws the frog against the wall, but currently all versions prefer something more romantic and that is to kiss it. . Popular memory has given rise to the daily use of a phrase from this tale: “you have to kiss many frogs before you find your prince”. This phrase is about encouraging to find true love.