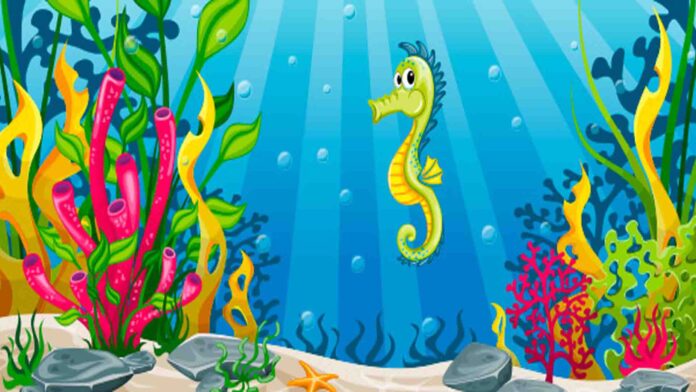 The seahorse is one of the most curious animals on the planet. It is called that because, as you may have already noticed, its head is very reminiscent of that of a horse.

Although it may not seem like it, the seahorse is a fish. Yes, a somewhat strange fish because it has no scales and swims upright thanks to a fin on the back of its body.

To be honest, the seahorse is not a good swimmer, but it also has against it that, as it is very light, if it does not wrap its tail around some aquatic plant, the current drags it as if it were a feather! has made this poor little animal easy!


His appearance is also the strangest. If you look closely you will see that its body is covered by a skeleton of bone that can be seen under the skin; In addition, it has little bulging eyes that, like the chameleon, can move independently, each one in one direction. Another curiosity is that it has a very practical snout that is used to suck up its favorite food: larvae, shrimp and plankton.

By the way, do you know what is the only male animal in the world that can get pregnant? You guessed right!: the seahorse. It is the female who is responsible for laying the eggs in the bag that the male has in the abdomen. After several days, sometimes weeks, it expels the young.

Although there are fifty different species of seahorses, they all have in common that they love to live in shallow and warm waters.

Do not forget that seahorses are very delicate animals that do not support life in captivity. As cute and cuddly as they may seem to us, we should never have them as pets in an aquarium.