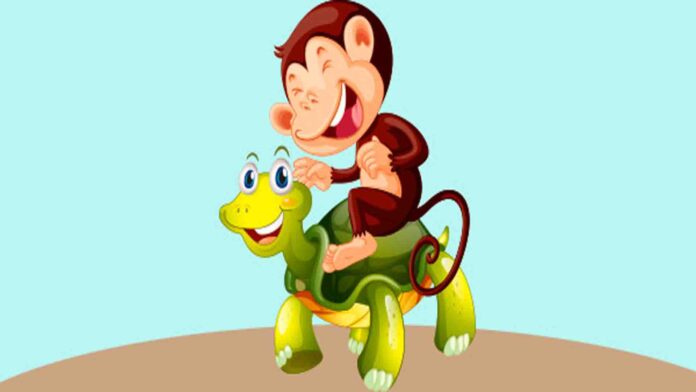 Adaptation of the Philippine folk tale

Once upon a time there was a monkey and a tortoise who got along wonderfully and were great friends. They were a peculiar couple that attracted attention wherever they went, but belonging to different species had never been a problem for them. Their friendship was sincere and based on mutual respect. Well, at least that’s what it seemed…


One day they were walking and chatting about their things when they found two banana trees lying on the ground. The little turtle, very surprised, exclaimed:

– Oh, monkey friend, what a pity it gives me to see those banana trees! I have the impression that the wind has knocked them over. Wouldn’t it be great to plant them again? Surely they would grow strong again and we would have bananas to eat at any time.

The monkey jumped for joy and began to clap his hands. There was no being on this planet more fanatical about bananas than him!


With much effort, the two animals lifted the heavy plants and covered their roots with moist soil so that they were well supported. When they finished the task they melted into a big hug, proud of the fantastic work they had just done.

Time proved them right and the banana trees began to bear bananas in abundance. One afternoon, the clever monkey detected that they were yellowish, at the right point of maturity, and without giving explanations he climbed up the plant and began to eat one after another as if there were no tomorrow. The tortoise wanted to do the same, but since he couldn’t go up, he had to stay down and watch his colleague gorge himself.

After a while, surprised that he hadn’t deigned to download one for her, she began to show concern.

– Hey, friend, they must be great because you’ve already eaten more than twenty!

From above, with both cheeks swollen, the monkey replied:

– They are exquisite! The pulp is very sweet and melts in the mouth as if it were butter.


– Oh, my mouth is watering!… I can’t wait to try them, but you know I’m a turtle and turtles don’t have the gift of climbing. I need your help, mate! Would you be so kind as to get some for me?

– Calm down, dear friend, there are a lot. In a few minutes I’ll download a few dozen.

The tortoise smiled and said:

An hour passed before he finally saw the monkey come down… empty-handed!

– But… where are my bananas?

The ape, inflated like a balloon from gobbling up so much, answered with amazing impudence:


– Sorry, friend, in the end I ate them all. Right now I must have the potassium through the roof, but they were so rich that I couldn’t contain myself.

– How do you say?… You are a cheeky and a bully! Half of the bananas were mine!

– Yeah, but understand that they excite me and that as the saying goes “eating and scratching everything is the beginning”.

Faced with such injustice, the tortoise was forced to make a decisive decision.

– Our friendship ends here and now! I don’t want to see you again, so the best thing is that one of us packs up and leaves forever.

The monkey, looking at her over his shoulder, replied with an air of superiority:

– Well, you know what I’m telling you?! I think it’s a very good idea because I’m starting to get very sick of you. You’re already taking a long time to go live somewhere else!… Get out of here!

The tortoise clenched its jaws and let out a growl that showed real anger.

– Grrr! That’s not funny! I challenge you to a race along the bank to the end of the river. Whoever wins will keep the two banana trees, and whoever loses will go to live in another forest.

As you can imagine, the monkey let out a laugh and replied in a mocking tone.

– Hahaha! You’re kidding?! You, one of the slowest animals on the planet, want us to risk everything in a race? Oh, I’m out of joint with laughter! Hahaha!

– If you are so sure of your superiority, I don’t know what you are waiting for to accept my challenge. Let’s get this over with!

An eagle, a buffalo and a small rodent acted as witnesses to the event so that the result was recorded in the minutes. They were also the ones who set the starting point and the finish line. When everything was in order, the buffalo shouted in his powerful voice:

In the blink of an eye the monkey managed to get a tremendous advantage over the turtle because the poor thing, loaded with its heavy shell and taking short steps, advanced very slowly, almost at the pace of a snail. Knowing that he was the clear winner, halfway through he stopped short.

– What a bore! I have so much time left that I’m going to rest a bit before resuming the race.

It was going to be just a little while, but his plan failed because he had eaten so many bananas that he fell into a deep sleep. As soon as he sat down he began to yawn, and seconds later he was snoring like a bear.

He slept soundly for two hours, and would have been longer if it hadn’t been for a very heavy mosquito that woke him up just as the tortoise passed him. The monkey, indignant, jumped to his feet and grabbing her by the neck, said:

– Hey you! Where do you think you are going? You were thinking of getting ahead of me, taking advantage of the fact that I was taking a nap, right?

In a fit of madness, the senseless animal gave the turtle a cruel kick and threw it into the river.

Do you want to know how this story ends?… Don’t worry, it has a happy ending thanks to the fact that the tortoise was lucky enough to meet the current in its favour, towards the goal. As much as the monkey ran like crazy along the shore, it was impossible for him to get there before her, who only had to turn on his back and let himself be dragged to proclaim himself the winner with all honors.

The monkey was overcome with a horrible feeling when he realized that because of his selfishness and bad behavior he had lost his best friend, but it was too late: before nightfall, he left the forest in search of another place to live. The tortoise, meanwhile, returned home and became the sole owner and lady of the two banana trees.