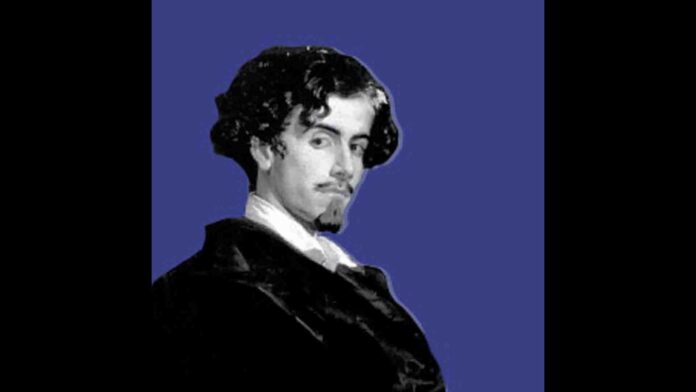 Gustavo Adolfo Bécquer is a famous Spanish poet, known above all for his love poems. In fact, Becquer’s poems are universally famous.

Bécquer is considered one of the most important figures in post-Romantic Spanish literature. In addition to being famous for his poetry, Bécquer is also recognized for his stories and legends.

Bécquer is considered the founder of modern Spanish lyricism . His influence is palpable in many writers of the 20th century, highlighting Octavio Paz and Giannina Braschi. 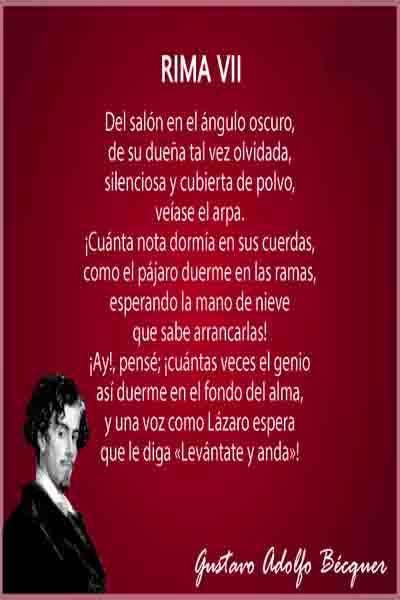 Gustavo Adolfo Bécquer was born in Seville on February 17, 1836. His father, José Domínguez Bécquer, was a highly talented and reputable painter, which greatly influenced the young Gustavo. His literary vocation emerged shortly after the death of his father.

After passing through several homes, Bécquer went to live with his godmother, Doña Manuela Monahay, a well-educated and wealthy person. At home he spent hours devouring the volumes of his library.

In 1853 Bécquer moved to Madrid to become a poet, along with several friends. Life in Madrid was not easy for the poet.

After several unsuccessful business attempts with his friends, Bécquer accepted a job as a writer for a small newspaper. But it did not last long and in 1855 he went to live with his brother.

After a few other failed attempts to get his work published, Bécquer and a friend began working together writing plays for a living. This collaboration continued until 1860.

During this period he met the Cuban poet Rodríguez Correa , who would play an important role in collecting his works for posthumous publication.


Bécquer wrote for different magazines throughout his life in order to earn a living, while combining his attempts to publish his poetic work. He also worked in various government positions , although most of them did not last long, since his true interest was in letters.

Between 1857 and 1858 Bécquer fell ill. Shortly after, he met Julia Espín by chance, with whom he fell deeply in love. She served as the inspiration for much of his romantic poetry . However, this love was unrequited.

A few years later, in 1861, Bécquer met Casta Esteban Navarro, whom he married in 1861. But Bécquer was believed to have had an affair with another girl named Elisa Guillén shortly before the marriage. This marriage appears to have been arranged by his in-laws.

The poet was not happy with the marriage and took the opportunity to follow his brother Valeriano on his travels. The poet wrote very little about Casta, since most of his inspiration at this time came from his feelings towards Elisa Guillén. Casta and Gustavo had three children: Gregorio Gustavo Adolfo, Jorge and Emilio Eusebio.

Last years in the life of the poet

In 1865 his friend, the Spanish minister González Bravo, appointed him to a government post, fiscal de novelas (censor of novels). This was a well-paid job, which he kept until 1868. During this period the poet concentrated on finishing his Book of Sparrows , thus not publishing a large number of his works. This book was lost after the political revolution of 1868. It was at this time that the poet left Spain for Paris, although he did not return until much later.

In 1869, the poet and his brother returned to Madrid together, along with Gustavo’s children. Around this time he began to rewrite the book that had disappeared the previous year and collaborated with various publications to get some money.

In 1870, Valeriano fell ill and died on September 23. This had a terrible impact on Gustavo, who suffered from depression. After publishing some short works, Bécquer also fell ill. He died in poverty in Madrid, on December 22 of that same year.

After his death, his friend Rodríguez Correa, together with other friends of Bécquer, also poets, collected and organized his manuscripts for publication, as a way of helping the widow and children. The first edition of this compilation was published in 1871. A second volume was published six years later. More revisions came out in later years, in editions released in 1881, 1885, and 1898.

Rhymes , the most famous poems of Bécquer

The Rhymes of Bécquer have been recited from memory by his contemporaries and greatly influenced later generations. It is about 98 short pieces that are considered the basis of modern Spanish poetry .

This book was composed after his death from many sources, the main of which was obtained from Becquer’s own manuscripts.

Still today, the poems of Gustavo Adolfo Bécquer are a source of inspiration for men and women of all ages.