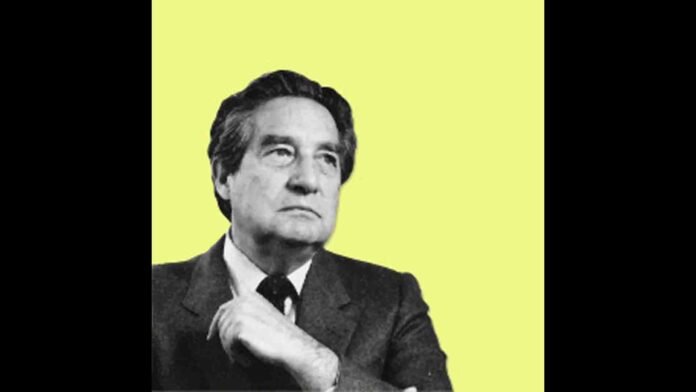 The Mexican Octavio Irineo Paz Lozano was born on March 31, 1914 and died on April 1, 1998. He was an outstanding poet, the poems of Octavio Paz have been considered one of the most important and influential literary references of the 20th century. However, being one of the best Hispanic American writers of all time did not make him cling only to the world of poetry.

Octavio was also an important diplomat, who fulfilled remarkable functions in political relations with countries such as India and Japan. This political vocation was the result of the influence given by his family. Since he was very young, his grandfather and father were very actively linked to the world of politics.

The best poems of Octavio Paz 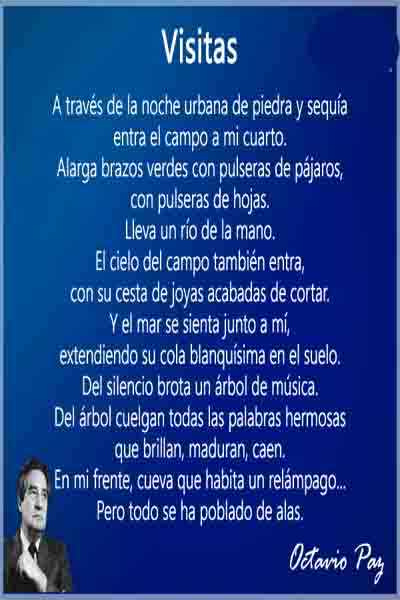 The writer had a great passion for letters, and for this reason he was also a playwright and essayist. But his beginning was far from peaceful, since his studies began in the United States and continued in Mexico, and in both places student times charged with political fervor were experienced.

In fact, Paz joined groups that defended radical social ideals in favor of workers and peasants. In the midst of all this, when he turns 16, he writes the first article to be made public: «Artist Ethics».

In this text, he already demonstrated his social maturity , approaching the idea of ​​the artist as an individual who must be aware of everything that surrounds him, and that in every way.

Paz spoke of an artistic morality based on duty, dividing the defined “pure artists”, who carried out their work by isolating themselves in a certain way from reality, from the “thesis artists”, who through art raise some social or of any kind, even offering solutions.

In 1931, he participated in the magazine Barandal, and he was also already known for publishing Sunday articles in the newspaper “El Universal”. In 1933, he finished his collection of poems “Wild Moon”, where the romantic tendency that began to flow in his lines could be appreciated, and also a separation from reality that was mixed with the mysterious world of dreams.


In the year 1934, the political ideas in the poems of Octavio Paz became evident , although they were not something that he kept hidden. Because of this, he received a diversity of opinions from those who shared his same passion for literature.

Later, in 1937, he met Neruda and Vallejo, with whom he made a short tour of Paris, Barcelona and Valencia.

That, without a doubt, was an important moment for Octavio, who called them the “myth born of the ocean” and the “bum of the city”, a friendly way of remembering them. These kinds of meetings were common among poets, who enjoyed sharing experiences and opinions with their colleagues.

Octavio Paz and his love poems

Octavio’s personal multifunctionality was reflected in his poems , which, throughout his years as a writer, showed a diversity of technical forms and structures that were difficult to catalog under a single line. He was a writer who enjoyed experimenting and who enjoyed constant nonconformity.

Initially he was shown as a neo- modernist poet , although later a more existentialist form was appreciated and sometimes surrealist lines were seen. For the analysts, it was an odyssey to define him in an absolute way, since the titles did not fully fit his work, but they were not alien to him either.


His constant experimentation did not allow him to permanently adjust to a literary form, he was a writer who was always at the forefront and who wrote his poetry from a very personal and philosophical point of view, which gave him his originality. It should be noted that other great poets worked in this way, which could be defined as “free”.

Paz showed great social concern , but his work changed over the years, and he ended up devoting lines to other topics that were much more emotional and philosophical. Loneliness and personal isolation were among the topics he addressed. But you could always read a fervent passion for beauty, which stood out in his love poems .

All writers, regardless of trends, always show a particular fascination, that something that torments them or constantly brightens their days. And Octavio ‘s poems show that he was no exception.

Time was something that obsessed him, something that he vehemently sought to escape from. This incessant desire led him to write the texts that he himself would define as “topoems”, a spatial poetry. An unusual type of poetry , timeless and bordering on the field of metaphysics.

We found several short Poemas de Octavio Paz poems, which revealed the great passion he felt for diversity of things and for poetry itself. “Made of air”, speaks of the very birth of poetry, says in a few words how poems arise from nature.

With «Olvido», Paz represents this mental characteristic as something that literally occurs inward, towards the darkness that invades us when we close our eyes, towards the silence that lies within us and towards the magnificent infinity of being itself. Octavio wrote a good group of poems between the years of 1933 and 1990.

He also carried out a large batch of essays that began in 1950 and ended in 1995. His poems were part of the anthologies “Poetry in motion” -which compiled poems by various authors- “The fire of each day”, “Sueño en libertad” – of a political nature-, and «Spiral Words».