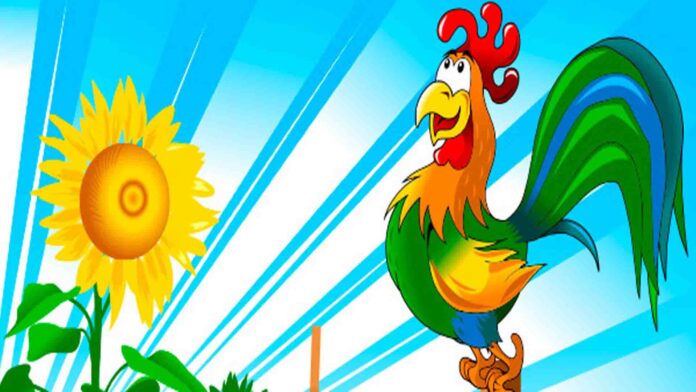 Adaptation of the Spanish folk tale

One sunny summer morning, a colorful rooster went out for a walk in the field. The owner of that land had recently planted, so he knew for sure that there he would find seeds and with luck a small worm to take with him.


He was distracted digging here and there when he saw a fox stealthily emerge from the undergrowth surrounding the farm.

– Oops, that bitch is coming for me! I have to get to safety!

The little colored rooster quickly looked around and saw a single tree a few meters from where he was. With no time to think of a better plan, he made a fluttering dash and climbed into the cup.

A few seconds later the fox came panting to the trunk, looked up and yelled:

– Hello, rooster friend! Why have you run away from me? I don’t understand what you’re doing on top of that olive tree… Is it because I scare you?

– Well yes… To be frank, your presence makes me panic!

The cunning fox, who wanted the rooster to come down to sink his teeth into her, put on a good face and began to lie like a villain.

– Well, I don’t know why you fear me. Haven’t you heard that there is a new law in this area?


The rooster looked surprised and curious. Without moving a hair from the branch to which he was clinging, he asked:

– What new law are you talking about?

The fox, very cunning, continued with her pantomime.

– Oh, how uninformed you are!… This week a new law has been published that obliges all animals and humans to live in peace. We are absolutely prohibited from harming each other!

The rooster stared into her eyes and felt no good vibes. Something inside him told him not to trust in the slightest that fox with reddish fur and a pointed snout with good acting skills.

The bitch tried even harder to look convincing.

– I swear I’m not cheating on you! From what I see it’s a law that everyone knows except you… Come down and I’ll calmly explain all the details!


The rooster began to doubt, what if he wasn’t acting and was telling the truth?…

The bitch was about to open her mouth to continue her story when suddenly she heard a noise behind her. He turned and discovered to his horror that they were two hunters armed to the eyeballs.

The fox started to run like a soul from the devil and the rooster from above yelled at her:

– Hey, friend!… Why are you running away? Didn’t you say that everyone knows the new law of peace between men and animals? If so, those guys are not going to hurt you and you have nothing to fear.

The fox, in full flight, yelled:

– Yes, yes, but it is possible that the hunters have not found out that this law exists either. Goodbye and see you never!

The fox had vilely wanted to deceive the colored rooster but the play went wrong and it was revealed that she had lied. The rooster stayed a little longer on the top of the tree, and when everything calmed down again, he calmly returned to the field in search of a delicious earthworm to satisfy his appetite.