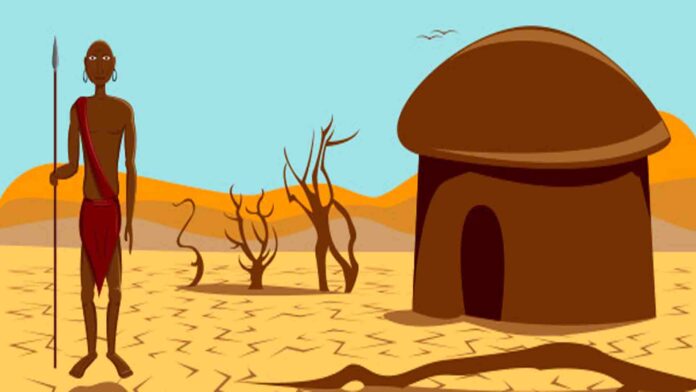 Adaptation of the folk tale of southern Africa

This is the small and moving story of an African boy who one day met his luck, but lost it for breaking his word.


Seetetelané, that was his name, was twenty years old and very, very poor. He lived alone in a hut and fed on small animals that he caught with his bare hands. When he couldn’t catch a fly, he gobbled up wild fruits or simple roots that he cooked over the fire of a bonfire. He lived in misery, he had nothing and he was satisfied with surviving.

On one occasion he was walking along a path and tripped over a huge ostrich egg. Now that was a once-in-a-lifetime delicacy! Radiant with happiness, she took it home and placed it on a small table made of sticks and rope.

He was dying to eat it, but since it was sweaty and dusty, he decided to go to the river first to clean up a bit. When he returned he found something truly surprising: next to the ostrich egg, there was a delicious and steaming platter of roast lamb with corn and vegetables that smelled like heaven. His mouth watered and a trickle of drool slid from the corner of his lips.


– But what is this?!… Where did this exquisite food come from, worthy of the best of banquets?… Oh, it must be delicious!…

As he said these words, the gigantic egg cracked and a slender girl with almond-shaped eyes and waist-length black hair emerged from inside. She was so beautiful that Seetetelané froze, unable even to blink.

After a few seconds that seemed endless, she said in a delicate voice:

– Thank you for taking me into your house.


– That’s how it is. I hope you enjoy it because it is made with a lot of love and effort!

The young man, still quite dazed, nodded and unceremoniously launched himself at the plate. He was so hungry that for a long time he did nothing but eat and eat anxiously until not even the crumbs were left.

Then she, very smiling, said to him:

– Know? If you want I can stay with you forever, but only if you meet one condition.

– Oh, sure, that would be great!… Tell me what condition that is.

– Never call me “ostrich egg daughter”, because if you do, I’ll be gone forever.

Seetetelané was thoughtful. Her new friend’s request was strange but simple to fulfill.


– You can rest assured that this will never happen. I would have to be very drunk to call you something like that and I only drink fresh water from the spring.

– I hope you’re telling the truth because I wouldn’t forgive you.

– I promise you that in no way and under no circumstances will I drink alcohol. Take my word for it.

Things became clear between them and for several weeks everything went smoothly. First they became friends, then they fell in love and finally they got married. Seetetelané was still poorer than the rats, but he felt happy and grateful to have such a wonderful companion by his side.

Time passed quickly and the first day of spring arrived. As it was a beautiful morning, the couple went out to lie down on the grass, a few meters from their cabin. They began to talk animatedly and she asked him:

– My beloved, tell me, what is your greatest wish?… What is your unattainable dream?

Seetetelané closed her eyes and let her imagination run wild.

– Oh wow, the answer is very easy! I would like to be rich, have land and live in a large and comfortable house instead of this shack. Well, let’s ask, I would love to have new clothes and comfortable shoes, because my feet are sore and full of calluses from always going barefoot.

Silently, the girl got up, kicked the ground three times… and the magic happened! The dilapidated shack became a large stone house surrounded by fields of grain; in them, several dozen perfectly organized peasants gathered the harvest. Seetetelané almost fainted from shock.

– What you see is for you; you deserve it for being so good and kind to me.

The young man pinched himself to make sure it wasn’t a hallucination, and as he did so, his fingers touched the soft silk robe that caressed his skin.

– What a delicate fabric! It seems fit for a king and not a nobody like me.

Absolutely dazzled, he swept his gaze over her body and was thrilled to discover the precious golden sandals tied to her ankles. He was about to say something when a servant came over to offer him a refreshing fresh fruit juice.

His heart bursting with joy, he looked at his lovely wife.

Seetetelané kissed her passionately. Without a doubt, he was the luckiest person on the planet.

Several weeks passed full of peace and glory until one day everything went wrong. Do you want to know what happened? Well, one night they went to a party in a nearby town, and in the midst of music, dancing and laughter, Seesetelané lost control and began to drink wine excessively.

His dear wife, seeing the danger that this entailed, tried to take the glass from his hands, but he, completely overwhelmed by the effects of alcohol, refused to give in and yelled at her:

– But what do you think?!… This wine is great so let me drink!

– Get out! You don’t rule over me, ostrich egg daughter!

Yes, you heard right: he said the only words he had promised never to say and now nothing and no one could repair the damage.

The biggest and most bitter tears slid down the girl’s face, and without saying anything, just as she had noticed the first day, she vanished into thin air and disappeared forever.

Seesetelane was so drunk that he didn’t realize his clumsiness and kept drinking nonstop. When the celebration came to an end, he stumbled away in a sorry state and when he reached his properties he discovered that there was nothing there: not a good house, no fields, no peasants, no servants… He lowered his head and contemplated horrified that he was barefoot again and covered in rags.

It was then that he realized that he had lost his riches, but above all, that he had lost the person he loved the most because of his disloyalty. In the midst of bitterness, he understood the importance of being honest with the people who really matter to us and who fill our lives with love and happiness.

Ruined and completely devastated, he fell to his knees on the ground and began to cry his eyes out. He knew that he would live the rest of his life regretting that he had broken his promise.