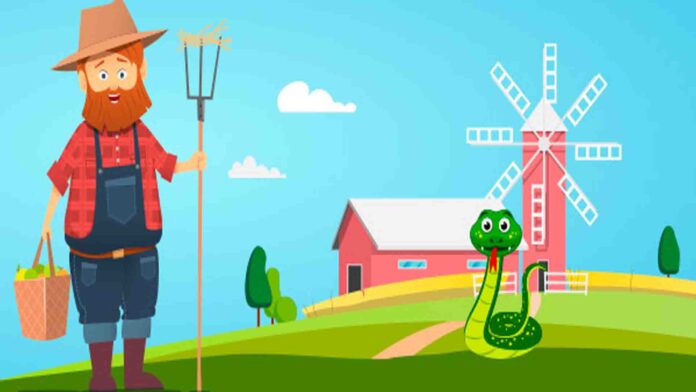 This is a little story that tells what happened to a compassionate man who trusted too much who did not deserve it. Do you want to meet her?


Once upon a time there was a farmer named Herman who lived in a country in northern Europe where the winters were terribly harsh. The months of ice and snow dragged on, but good old Herman refused to spend so much time cooped up at home doing nothing, waiting for spring to return. Therefore, overcoming laziness and low temperatures, every morning he said goodbye to his wife with a kiss and went out for a walk around the area. At least for a while I could admire the scenery and stretch my legs a bit!

It happened that one day he stuck his head out the door and noticed that although the sun was shining brightly, the cold was more intense than ever. Before setting foot outside, he covered himself with various warm clothes and finally covered his face with a thick wool scarf. He didn’t want to risk seeing his nose turn into an ice floe!


– I think now I’m ready… At my age I have to wrap up a lot so I don’t catch pneumonia!

Wrapped in more layers than an onion, he walked through the valley between snowy mountains, always following the course of the river so as not to get disoriented. The frigid air cramped his muscles and chafed his hands, but he was a man accustomed to the harshness of the countryside, and the magnificent ride was well worth a small sacrifice. After half an hour, he decided to stop to rest.

– I’ll be comfortable on that stone over there!

He sat down on a flat rock and was amazed looking at the beautiful surroundings. When he came to, he remembered that he had kept a succulent ham sandwich in his backpack.

Herman picked up the sandwich and put it in his mouth. It was so good that four bites were enough to make it disappear!

– Well, half of my walk has come here. Now I have to do the route in the opposite direction to home. My goodness, how cold it is today! I hope there is no blizzard.

He stood up, slung his backpack on his back, and when he was about to take the first step he saw something elongated on the grass that caught his attention. He approached slowly and discovered that it was a gray viper with black spots. The poor thing didn’t move and was stiffer than a wooden stick.

– Oh I’m sorry! It must have been out in the open for hours and is about to freeze to death. But if she can’t even open her eyes!… The best thing would be to put her next to my chest so that she warms up a bit.


Herman, who was a man who was very sensitive to the suffering of others, felt great compassion. Without wasting a second, he unbuttoned the clothes he was wearing and left part of his torso exposed. Immediately afterwards he placed the animal close to his white skin, just at the height of the heart.

– She is completely paralyzed, but I think that will revive her.

One by one, he buttoned all his clothes again and headed back.

– This little girl does not deserve to die. I hope he gets over this trance and survives!

Thanks to the warmth and Herman’s movement as he walked, the snake began to come out of its slumber. First the paralysis of his body disappeared and then he gradually regained his senses. Within five minutes she felt like new again! Great news if it weren’t for the fact that when he regained his physical form and natural instinct he behaved as he really was: a wild and dangerous animal that didn’t hesitate to open his jaws to bite his savior. Without expecting or deserving it, good old Herman felt a very painful stab in his neck that made him lose consciousness and collapse.

Luckily his wife, surprised by the delay, had gone looking for him on the back of one of his horses. He knew exactly what his daily route was, so it didn’t take him long to find him. He was lying on the ground, motionless as a statue, white as meringue.

– Herman, Herman! What happened to you, my love?… Herman!

He got down from his horse and crouched down beside him to see a viper slithering away at full speed. Horrified, she began to understand everything. He pulled off Herman’s clothing, revealing the deep, bloody fang marks.

There was no time to lose! The reptile’s venom had spread like a trickle through his veins and his existence was in serious danger.

– If the poison reaches his heart it will be too late!… I have to act quickly!

Boldly and decisively, she brought her mouth close to the bite and began to suck and spit out the deadly snake’s saliva to the last drop.

– I think you are already clean because the color is returning to your cheeks! I’d better get you on the horse and go home!

Many hours passed before Herman managed to wake up from his deep sleep, and when he did, he found himself lying on the bed with a bandage around his neck. His wife stared at him as she caressed his hands gently.

– Dear, I almost lost you… A viper bit you!… Honestly, I don’t understand how something like this could happen to you…

– Oh, don’t look for an explanation, dear! I can only say that the fault is mine for having helped an evil being who did not deserve my compassion. But don’t worry, don’t suffer any more for me: I assure you that I have learned my lesson and it will never happen to me again.

And with that said, Herman gave a loving hug to the woman he loved the most and who had saved his life.

Moral: Always try to surround yourself with people with a good heart, people who really love you and want the best for you. On the contrary, stay away from people with bad feelings, because their intentions are usually not good and as soon as the opportunity arises, they will betray you.